The patient is a 62 year old man presenting with increasing breathlessness for the past six weeks. The patient first noted symptoms of mild shortness of breath and cough productive of yellow sputum that he attributed to his yearly winter cold. The sputum cleared and at presentation the patient had largely unproductive cough. A construction worker until six months earlier, the patient’s unlimited exercise tolerance was now limited to minimal exertion. He denied current fever, hemoptysis, night sweats, arthralgias, rash, and exposure to people with TB, but did note recent bilateral ankle swelling. The patient denied recent travel. Upon further questioning, the patient said that he maintained up to twenty finches in his apartment and had kept them until two weeks prior to admission. The patient had a 45 pack year smoking history but stopped 2 weeks earlier due to worsening shortness of breath. On exam, the patient was tachypneic at rest with pulse oximetry showing 90% saturation while breathing ambient air, a heart rate of 110 bpm and a chest exam that was unremarkable.

CXR and Chest CT are shown below: 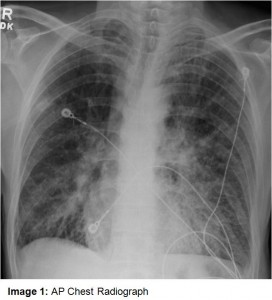 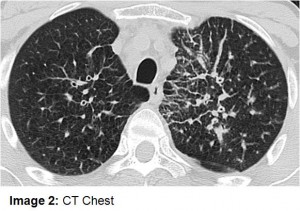 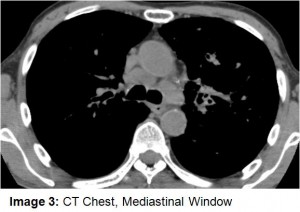