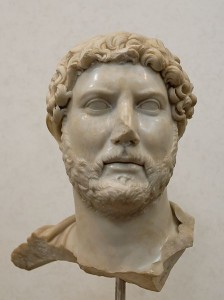 Publius Aelius Hadrianus, better known as Hadrian, emperor of Rome (117-138 CE), traveler, warrior, and lover of all things Greek, fell ill at the age of 60. He developed progressive edema and episodic epistaxis, fell into a depression soothed by rich food and drink, and succumbed to death within 2 years. The exact cause of Hadrian’s death–whether by heart failure, glomerulonephritis, or even hereditary hemorrhagic telangiectasia–has been a topic of debate among paleopathologists. It was not until 1980 that a crucial clue was found, memorialized in stone busts of the late emperor: he was sculpted with a deep diagonal crease in both earlobes. [1]

Since its first description by Frank in the New England Journal of Medicine in 1973[2], the presence of the diagonal earlobe crease (ELC) has been recognized as a marker of coronary artery disease (CAD). Subsequent studies confirmed the ELC (or Frank’s sign) as a predictor of CAD independent of age, cholesterol, blood pressure, or smoking status. On the other hand, several studies found no correlation between ELC and CAD and suggest that it is simply a marker of advancing age. Over 50 papers have been published regarding this physical diagnosis sign, and for almost 4 decades controversy has raged over its utility. Is the ELC a clinically useful predictor of CAD? In order to answer this question we performed a meta-analysis of all published studies evaluating the role of ELC as a predictor of CAD.

Published articles, abstracts, and letters were obtained using the search term “Ear Lobe Crease.” Raw data regarding prevalence of ELC and CAD were collected and analyzed to calculate sensitivity, specificity, and likelihood ratios (LR). Significance was determined using the Fisher exact test and Chi squared test (depending on the number of patients in the study), and P values and 95% confidence intervals (CI) were calculated.

There was significant variation in the design of the studies, ranging from large population screening studies to smaller studies looking at patients undergoing angiography for suspected CAD. The majority of studies found that ELC was a statistically significant predictor of CAD: the results of 6 of the 22 studies analyzed were not significant, and the remaining 16 studies demonstrated varying degrees of predictive value, with likelihood ratios ranging from of 1.33 to 9.20 (see figure 1). Upon pooling all data, we found an overall sensitivity of 60.4% and specificity of 74.4%. We found that the presence of ELC has a LR of 2.37 (CI of 2.26 to 2.48) for predicting CAD. We analyzed the subset of studies that included only cardiac patients and found that the utility of ELC was lower in this group than in an unselected patient population (LR of 1.88 vs 2.44). Similarly, when the higher-risk diabetic population of the Fremantle Diabetes study was excluded, the LR was slightly higher.

Frank suggested that the presence of “a prominent crease in a lobule portion of the auricle” may be indicative of small vessel pathology, possibly explaining the correlation with CAD.[1] Shoenfield and colleagues performed histological examination of earlobe creases and found substantial thickening of the arteriolar walls relative to controls without ELC.[25]

Many authors performed multivariate analysis to ascertain if ELC is truly an independent marker of CAD risk or just a surrogate for other known risk factors. Several studies found that though ELC correlates with CAD, it is independent of other CAD risk factors (hypertension, hyperlipidemia, diabetes, and smoking).[13,15].

Other studies reported that that the LR of bilateral ELC is higher than that of unilateral ELC [15], and that depth of the ELC portends a greater likelihood of CAD. It has also been proposed that the presence of additional factors, such as earlobe hair [17], could further increase the utility of the sign.

The utility of ELC may vary depending on several factors. Age appears to be a significant potential confounder, and indeed the incidence of ELC increases with age in every study. However, as expected, the incidence of CAD also increases with age, and it is unclear at what ages the utility of the sign is highest. Several studies performed subgroup analyses looking at the utility of the ELC in patients of different ages with conflicting results. In general, though, the studies found that the presence of ELC has some predictive value across all age ranges.

A few studies have reported negative results in the context of specific ethnic groups. Fisher and colleagues found no significant relationship between ELC and CAD in American Indians [11], and Rhoads and colleagues found no relationship in Japanese-Americans living in Hawaii.[8] Overall, the published incidence of ELC seems to vary significantly among different populations; the significance of this is not clear.

The utility of ELC may also be lower in patients who have a higher pretest probability of CAD, such as in the studies of patients undergoing angiograms for assessment of suspected CAD.[3,17,22] Furthermore, the Fremantle diabetes study suggested that among patients with one of the most important CAD risk factors, diabetes, there is no correlation between ELC and CAD.[21]

Given these limitations, what is the utility of ELC relative to the more established CAD risk factors such as diabetes, hypertension, hyperlipidemia, and smoking? Unlike the modifiable risk factors, which can be addressed by medical management, ELC is only a marker for coronary disease. A recent epidemiological study by Greenland and colleagues [26] and review by Weissler in JAMA [27] showed that the predictive value of these traditional risk factors for predicting CAD complications (MI or death) was quite low (LR ranging from 1.07 to 1.39). Though our meta-analysis looked at ELC as a predictor of CAD (rather than complications of CAD), we find that while the LR of ELC for predicting CAD is modest (LR of 2.37, CI of 2.13 – 2.88), it is significantly higher than that of traditional risk factors. Although we find that the presence of ELC is neither especially sensitive nor specific for CAD, when compared to other known risk factors it does appear to be useful. Thus, we propose that ELC may be a useful additional marker for identifying patients with CAD.

Perhaps if Hadrian were alive today, his sculptors would not have been the only ones to take note of his ears. 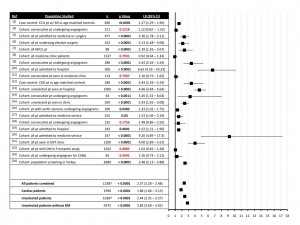 One comment on “The Diagonal Earlobe Crease: Historical Trivia or a Useful Sign of Coronary Artery Disease?”