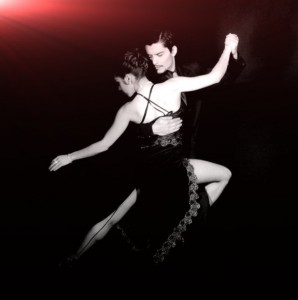 Parkinson’s disease (PD) is a progressive neurodegenerative movement disorder that affects over 1 million people in the United States. People with PD often demonstrate postural instability, gait difficulties, and impaired functional mobility, which can lead to falls and decreased quality of life.[1] Medical treatments for PD do not fully address gait and balance issues and, consequently, additional approaches are needed.[2] One approach that has recently emerged in clinical studies is the use of dance, particularly the Argentine tango, as therapy to improve motor function in Parkinson’s patients. Can this social partner dance rooted in the early nineteenth century brothels of Buenos Aires really help improve the motor disturbances of Parkinson’s disease?

In PD, there is an imbalance in neurotransmitters such as dopamine, gamma-aminobutyric acid (GABA), and acetylcholine in the basal ganglia, which compromises their role in the motor control of skilled voluntary movements.[3,4] As a result, patients develop bradykinesia with short, shuffling steps and flexed posture, and may have freezing of gait. Patients also have difficulties with balance, and dual tasking while walking, turning, and walking backwards.[5] Traditionally, physical therapy is prescribed along with medical treatment to address these symptoms. In 2007, Keus and colleagues made evidence-based recommendations regarding the four key components of physical therapy design for PD patients: 1) cueing strategies to improve gait; 2) cognitive movement strategies to improve transfers of weight; 3) exercises to improve balance; and 4) training of joint mobility and muscle power to improve physical capacity.[6] Based on these recommendations, it is clear why the Argentine tango may be an effective form of therapy in PD.

The Argentine tango is a partner dance in which the couple is embraced in each other’s arms, and the leader guides the follower, creating synchronized walking and body movement to the music. This form of dance uniquely addresses each of Keus’s recommendations.[7] First, all movement is done to music. Rhythmic auditory cues have been shown to be beneficial in gait training for PD patients.[8] Similarly, music in Argentine tango may act as an external cue to facilitate movement. Secondly, the Argentine tango teaches specific movement strategies for walking patterns that are particularly difficult for PD patients, like walking backwards. To walk backwards in the Argentine tango, dancers are taught to “keep the trunk over the supporting foot while reaching backward with the other foot, keeping the toe of that rear foot in contact with the floor as it slides back and shifting weight backward over the rear foot only after it is firmly planted.”[7] Balance, the third recommendation, is addressed though the partnered nature of the Argentine tango; the dancers must work to maintain balance dynamically while turning and in the midst of random external perturbation. Finally, similar to other forms of dance, if the Argentine tango is done with sufficient amount of intensity, it can be an aerobic workout and result in improved cardiovascular function and physical capacity.[7]

Based on this information, the Argentine tango appears to contain the four recommended components of physical therapy for individuals with PD and to be an effective form of movement therapy as well. Not only has Argentine tango proven to be beneficial for the motor function of patients with PD, it has also demonstrated superiority to exercise and American ballroom dance. The Argentine tango demands postural control, movement initiation, turning, and moving in close proximity to another individual. These fundamentals of Argentine dance can improve balance, difficulties in movement initiation, directional changes, and overall functional motor control. While there is currently a small number of studies looking at the Argentine tango and its effects in PD, the research to date is highly suggestive of a potential benefit for patients with mild-to-moderate PD with movement disturbances. If research continues in this direction, it may not be long before we see Parkinson’s patients practicing the Argentine tango up and down the halls of Neurology Clinic.

10. Hackney ME, Kantorovich S, Earhart GM. A study on the effects of Argentine tango as a form of partnered dance for those with Parkinson’s disease and healthy elderly. Am J Dance Ther. 2007;29:109-127.