Is There Really Any Role For Steroids In Acute Alcoholic Hepatitis? 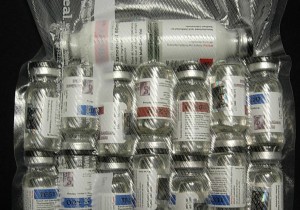 The patient is a 48-year-old male with a history of heavy alcohol use (he drinks about 1 pint of vodka daily) who presented to the hospital when he noticed that he had become increasingly jaundiced. The patient was hemodynamically stable on admission and afebrile, with jaundice and scleral icterus on exam. Laboratory data was significant for a total bilirubin of 6.6, an INR of 2.3, AST of 83, ALT 72, and a Maddrey’s discriminant function (MDF) that was calculated to be >32. The patient was diagnosed with alcoholic hepatitis.

The question that we now seek to answer is if administration of corticosteroids would be of benefit in the management of alcoholic hepatitis in this patient?

Alcoholic hepatitis (AH) was a term that was first used in 1961, however there were many antecedent descriptions in the medical literature of patients who developed jaundice following ethanol consumption [1]. Evidence exists suggesting that an increased risk of cirrhosis and AH is due, not only to daily ingestion of large amounts of alcohol (greater than 10-20g/day for women and 20-40g/day for men) [1], but with contributions from genetic and environmental factors. Chronic alcohol consumption has been demonstrated to cause hepatocyte dysfunction, apoptosis, and necrosis through a combination of oxidative stress and endotoxin-mediated cytokine release [2] with resultant liver abnormalities ranging from steatosis (fatty liver), to cirrhosis, to hepatocellular carcinoma [2]. Steatosis and hepatitis related to alcohol use can often be reversed with sobriety, though evidence for reversal of cirrhosis is more scant [1, 2].

The Maddrey discriminant function (MDF) was introduced in 1978 in an attempt to identify patients with severe AH who face very high mortality rates. The equation for calculation of the MDF is as follows:

and a value of 32 or greater indicates that the patient has severe alcoholic hepatitis and a mortality rate of 50% without treatment [3]. Once a diagnosis has been made and the severity of AH characterized, it is necessary to address treatment. All patients should cease alcohol intake, and it is necessary to correct nutritional deficiencies. Steroids have been used in the treatment of severe alcoholic hepatitis (MDF >32), and we will examine the evidence for this approach in the remainder of this article.

Corticosteroids are the most extensively studied intervention in AH, though their use has engendered controversy in the literature. Corticosteroids inhibit the inflammatory process in alcoholic hepatitis by reducing the circulating levels of inflammatory cytokines and by downregulating expression of adhesion molecules responsible for attraction of immunocytes to the damaged liver [4]. Between 1971 and 1992, there were 13 clinical trials that assessed the efficacy of steroid use in alcoholic hepatitis. Eight of these trials concluded that there was no improvement in the outcome of steroid treated patients compared to those who received placebo therapy [5]. The majority of these trials were limited by small sample sizes (limiting statistical power), and varying inclusion/exclusion criteria. Meta-analyses have therefore been used to further examine the data. Imperiale et al studied eleven randomized trials from 1966 to 1989 and found that treatment of patients with alcoholic hepatitis with steroids was associated with a 37% reduction in mortality. In this meta-analysis, the mortality benefit was only evident in patients with hepatic encephalopathy [1]. Similarly, Rambaldi et al, examined 15 randomized trials with a total of 721 patients, and found that glucocorticosteroids did not reduce mortality of the entire population of patients with alcoholic hepatitis, compared with placebo (or no intervention), but mortality was statistically reduced in subgroups who either were experiencing hepatic encephalopathy or could be characterized as having severe alcoholic hepatitis with a MDF score of 32 or above [6].

Another study by Mathurin et al used pooled primary data from three placebo-controlled trials to compare corticosteroids with placebo in patients, all of whom had severe AH (MDF greater than or equal to 32). In this group of patients, at 28 days, patients who received corticosteroids had a significantly higher survival (84.6 % vs. 65.1%) compared to those who received placebo. Increasing age and serum creatinine were found to be independent prognostic factors for death from severe alcoholic hepatitis in this study [7]. While this represents a modest absolute reduction in risk, it nonetheless reveals that steroid treatment of severe alcoholic hepatitis is associated with a survival advantage, with a number needed to treat (NNT) of 5 [3]. Thus, based on the recent literature, we can conclude that patients with severe alcoholic hepatitis, as defined by a MDF greater or equal to 32 or with hepatic encephalopathy may derive a benefit from corticosteroid treatment. It is important to know that another agent, pentoxifylline (a phosphodiesterase inhibitor), has been demonstrated in various studies to reduce short-term mortality among patients with AH, and these mortality effects may be related to the prevention of hepatorenal syndrome (unlike steroids which reduce hepatic inflammation). Therefore, pentoxifylline is also an agent worth considering for some patients [5].

After initiation of steroid therapy, it is necessary to assess response to therapy, since steroid side effects are associated with increased morbidity and non-responders should have therapy stopped. A study by Mathurin et al included 238 patients with AH. They found that an early change in bilirubin levels (ECBL), defined as a decrease in bilirubin level after seven days of treatment, was associated with improved outlook; 95% of patients with ECBL continued to have improved liver function during treatment and a significantly higher 6 month survival rate of 83% vs. 23% in those patients who did not experience a decrease in bilirubin following treatment. An ECBL may therefore identify nonresponders to steroid therapy, and the authors of that study recommended discontinuation of steroids after 7 days in nonresponders [8]. Louvet, and his group in Lille, France, generated a specific prognostic model (the Lille model) to identify nonresponders. In order to validate the Lille model, they prospectively studied 328 patients with AH treated with corticosteroids. Their model combines six reproducible variables (age, renal insufficiency, albumin, prothrombin time, bilirubin, and evolution of bilirubin by day 7), and patients with a score on the Lille model above 0.45 have a markedly decreased 6 month survival compared to others (25% versus 85%). Thus, this model may further identify patients who are nonresponders to corticosteroids and who may be candidates for alternative therapy [9]. Lastly, a study by Mendenhall et al. suggested that patients with a very severe AH, as defined by a MDF of 54 or higher may actually be at a higher mortality risk from the use of steroids [10].

A common concern about use of steroids in the treatment of severe AH is the risk of inducing or exacerbating infections. Patients with AH commonly experience low-grade fevers as a manifestation of their systemic inflammatory process. In addition, patients with severe AH may suffer from significant clinical deterioration and are at risk of community and hospital-acquired infections. Thus, the decision to utilize steroids in these patients is often fraught with uncertainty. The risk of steroid use in infected patients with AH was examined in a study by Louvet et al. The investigators examined 246 patients with severe AH; 63 of whom were infected at admission, and 57 who developed an infection after initiation of steroid treatment. Among these patients, infection developed significantly more frequently in nonresponders to steroids, compared to those who responded to treatment (42.5% to 11.1% respectively). Therefore, infection is not a contraindication to steroid use in these patients and screening for infection prior to initiation of steroid therapy is unwarranted. In fact, nonresponse to steroids appeared to be the primary risk factor associated with development of infection in this study [11].

It is important to recognize that the efficacy of steroids has not been evaluated in patients with severe AH and concomitant pancreatitis or gastrointestinal bleeding, as these were exclusion criteria in many of the early studies of alcoholic hepatitis [5]. We must also take side effects of corticosteroids into consideration. Approximately 16% of patients will experience adverse effects due to corticosteroids, primarily in the form of hyperglycemia, but also with increased risk of infection [3]. Another serious practical issue regarding corticosteroid treatment is discontinuation of treatment [3]. The best available evidence suggests that prednisolone should be the steroid of choice and should be administered at a dose of 40 mg/day for 4 weeks [5].

Therefore, based on the data presented, we can conclude that treatment with prednisolone is most likely to improve short-term survival in our patient because he had a MDF between 32 and below 54 without evidence of gastrointestinal bleeding or pancreatitis. However, steroids should be stopped if our patient does not have an EBCL, and is therefore most likely a nonresponder to corticosteroids, and may suffer an adverse event from steroid use. If our patient had evidence of hepatic encephalopathy, treating with corticosteroids would be indicated as well.

3 comments on “Is There Really Any Role For Steroids In Acute Alcoholic Hepatitis?”