A Study of Cultural Complications in the Management of Diabetes 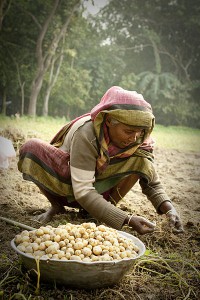 Ms. KS is a 49- year-old Bangladeshi woman with a history of diabetes mellitus and non-adherence to medical treatment or follow up, who was reluctantly brought to the Bellevue ER by her family for nausea, vomiting, and fevers for one day. Her most recent hospitalization was 9 months prior for epigastric discomfort in the setting of uncontrolled diabetes with a hemoglobin A1C of 12.4%. On arrival, her physical exam was significant for tachypnea, tachycardia, and dry mucus membranes. Her labs revealed hyponatremia, severe hyperglycemia, metabolic acidosis, and prerenal azotemia. She was diagnosed with hyperosmolar hyperglycemic nonketotic syndrome and treated with fluid replacement and IV insulin.

Diabetes is a rapidly growing, deadly, and costly epidemic. One in every 12 New Yorkers has diabetes now and the number will double by 2050. It is the sixth most common cause of death, and one of every five U.S. federal health care dollars is spent on treating people with diabetes [1]. Most health care workers know about the medical challenges associated with diabetic patients, but the social and cultural dilemmas are not as well characterized. Ms. KS’s case was a paragon of anthropologic complexity. She spoke Bengali, but refused to use the translator phone, insisting on only using her son as a translator. She avoided contact with the medical team—her son confirmed that she was extremely anxious in a hospital setting and generally avoided doctors. Furthermore, she adamantly protested any blood draws or IVs, as she believed that taking her blood was equivalent to “taking her energy”. While well-known complications of diabetes may include neuropathy, renal disease, and retinopathy, Ms. KS’s case was complicated by generalized distrust of Western medicine and non-adherence to medical advice. While it is entirely possible that her distrust, anxiety, and beliefs are purely personal, her case is a valuable opportunity to learn more about Bangladeshi-American culture and to explore how cultural background can influence healthcare, both at home and in the hospital.

Records of small numbers of Bangladeshi immigrants to the US trace back to the 1880s, but the 2000 US Census estimates a Bangladeshi-American population of over 140,000 [2]. This increase in Bangladeshi population was primarily a result of a major influx of immigrants during the 1990s, which is not surprisingly when Ms. KS’s family immigrated to America. During this decade, the Bangladeshi population grew by over 450% [2]. There are dense communities of Bangladeshi people in New York City, Los Angeles, Miami, Washington D.C., Atlanta, and Dallas. Limited English proficiency is quite common among this population. 65% of working-age Bangladeshi New Yorkers and 83% of Bangladeshi senior citizens speak limited English [3]. These numbers are markedly elevated compared to the city-wide averages of 25% and 27% adults and senior citizens respectively. Although English is a common second language in Bangladesh, some anthropological readings suggest that many immigrants may speak primarily Bengali as a means of maintaining cultural identity [4]. Ms. KS refused to use a medical translator, but these services are fortunately becoming increasingly available. However, financial strains remain a common obstacle to healthcare, especially in Bangladeshi patients. Census data indicates that Bangladeshi populations in New York City on average have incomes of less than half of the city-wide averages and are 50% more likely to live in poverty [3]. Based on this data, Ms. KS’s limited English proficiency is not surprising even though she has lived here for many years. She is also more likely to have financial hardships than the average New Yorker, possibly requiring the help of a social worker.

An interesting article published in the British Medical Journal in 1998 provides insight into Bangladeshi beliefs in the context of Western medicine. This qualitative study used narratives, semi-structured interviews, focus groups, and pile sorting exercises to explore the influence of cultural background on 40 British Bangladeshi diabetic patients as compared with 10 non-Bangladeshi controls. The study explores important aspects of diabetes education and management and reveals that there are some interesting similarities and differences between the Bangladeshi population as compared to non-Bangladeshis:

Body Concept/Exercise. When asked to pick out images of “healthy-appearing” individuals, Bangladeshi subjects were more likely to select those of a larger body habitus, correlating size with strength. This correlation only held to a certain extent though, with morbidly obese patients being identified as less healthy [5]. Although most subjects acknowledged that they had been given advice to exercise, this advice appeared to have little cultural meaning. Some viewed exercise as a cause for illness exacerbation. Notably, some dialects of Bengali do not even have a word for “exercise” [5]. Sports and games are infrequent among adults in Bangladesh [6]. This information suggests that physicians should steer clear of advising Bangladeshi patients to “lose weight” and “exercise”. Rather, the emphasis should be placed on an active lifestyle, the significance of visceral fat, and replacing fat with muscle.

Diet/nutrition. When asked to sort foods as health or unhealthy, Bangladeshi subjects most commonly picked foods perceived to provide the most energy and strength as “healthy”, including white sugar, lamb, beef, solid fat, and spices. Interestingly, raw, baked, and grilled foods were largely considered “indigestible” and “unsuitable” for elderly, debilitated, or young people [5]. A common nutritional recommendation to bake or grill foods rather than fry them may therefore be seen as discordant with cultural dietary perceptions. Although time-saving, broad generalizations in dietary advice may be less successful and should be replaced by customized meal plans in accordance with both the diabetic diet and cultural beliefs. Furthermore, the impact of snacks on glycemic control should be directly addressed with Bangladeshi patients. 18 out of 18 study participants were in favor of eating snacks between meals to “sustain strength”. Only 5 of these 18 subjects thought snacks could cause any harm [5]. Ms. KS commonly snacked throughout the day, and although a diabetic diet was delivered to her for each meal, she never ate the prescribed diet and instead chose to eat food that her family brought, which commonly featured beef and white rice. Ms. KS is a perfect example of how cultural preferences and perceptions of food may make diabetes difficult to control.

Diabetic monitoring. Most patients in this study reported that they monitored glucose levels as instructed by their doctors; however understanding of the importance of surveillance was limited. Most Bangladeshi patients believed that a lack of symptoms implied health and well-controlled diabetes. They did not see a need to visit a doctor if they were feeling well [5]. This appeared to be the case for Ms. KS—she had a glucometer at home but reported rarely using it and her only visits to a medical professional were in an emergency setting. For patients like her, repeated education about routine glucose testing and preventative care visits to primary care, podiatry, and ophthalmology clinics cannot be stressed enough.

While these study results provide interesting insights, it should be acknowledged that no scientific or anthropological studies of Bangladeshi culture can be uniformly applied to all Bangladeshis, nor should cultural beliefs be considered static. However, they can be invaluable as a basis for culturally sensitive diabetes education. A thorough interview of future diabetic Bangladeshi patients includes questions about the patient’s beliefs regarding the cause and treatment of diabetes, the role of exercise, and attempts at reconciliation of the patient’s traditional diet with the diabetic diet. While the statistics and beliefs identified in this discussion are targeted toward the Bangladeshi population, the information can be conceptually extended to patients of other cultural backgrounds. Ms. KS’s past history of medical non-adherence and poor glycemic control may indicate that her future care could be difficult, but given her unique background, her case was also an opportunity for cultural sensitivity to prevail over differences in beliefs.

Kimberly Jean Atiyeh is a student at NYU School of Medicine

6. Chowdhury A. Household kin and community in a Bangladesh village. Exeter: University of Exeter. 1986.