Nothing QT (Cute) about it: rethinking the use of the QT interval to evaluate risk of drug induced arrhythmias 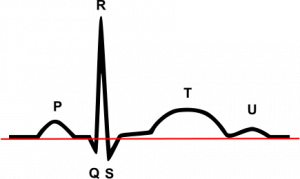 Perhaps it’s the French name, the curvaceous appearance on electrocardiogram (EKG), or its elusive and mysterious nature, but Torsades des pointes, a polymorphic ventricular arrhythmia, is certainly the sexiest of all ventricular arrhythmias. Very few physicians and scientists can explain its origin in an early afterdepolarization (EAD), and fewer still can explain its “twisting of the points” morphology on EKG. Despite its rare occurrence (only 761 cases reported to the WHO Drug Monitoring Center between 1983 and 1999)1, every medical student is taught that it is an arrhythmia caused by prolongation of the QT interval. The more savvy medical student will implicate the corrected QT interval (QTC) and recite a fancy formula with a square root sign to determine this value. Suffice to say, the mystic nature of torsades des pointes and the negative attitude towards QT prolongation have been closely intertwined over the years. While the most common culprits, such as cisapride, macrolides, terfenadine, and haloperidol[1] have become maligned for this reason, there are many more that do not even make it to the market because they prolong QT interval2. (A comprehensive list of QT prolonging drugs with associated arrhythmia risk can be found at <http://www.qtdrugs.org/>) Although our conceptions of a long QT interval have been inculcated repeatedly, there is growing evidence that QT interval prolongation may not be sufficient to predict risk of drug induced TdP, and that other, more sensitive and specific markers should be utilized.

The QT interval, which is the amount of time between the start of the QRS complex and the end of the T wave on EKG, is a marker of the amount of time required for ventricular tissue depolarization and repolarization. On a cellular basis, it is closely related to the duration of the cardiac myocyte action potential (AP). In pathological conditions, myocyte depolarization can even occur during phase 2 or 3 of the action potential, producing an EAD. These EADs can give rise to ectopic beats in the tissue, and produce arrhythmias such as TdP due to the R on T phenomenon. It is generally thought that EADs are caused by problems with myocyte repolarization- which would prolong QT interval- and thus QT prolongation has been linked to EAD mediated arrhythmias such as TdP. Drugs such as haloperidol have been shown to block the potassium channels responsible for AP repolarization, and as a result prolong QT interval. However, it has become more apparent in recent years that prolonged repolarization (or QT interval) is neither sufficient nor necessary to produce the EADs (or ectopic beats) that cause arrhythmias[3-6].

The EAD is an arrhythmogenic entity that has been implicated in a variety of abnormal rhythms, including ventricular tachycardias, such as TdP, ventricular fibrillation, and atrial arrhythmias. In the normal cardiac action potential, Na+ channel opening produces the inward current necessary for the initial upstroke of the action potential, L-type calcium channels produce a plateau caused by influx of calcium, and K+ channels produce an outward current to assure full repolarization. The simplistic explanation for EADs has always been that EADs occur when inward currents (Na+ and Ca2+) are greater than outward currents (K+). This explains why EADs can occur as a result of K+ current inhibition- as seen with the use of anti-arrhythmics such as sotalol, or in the presence of hypokalemia. The advantage of this simplistic viewpoint is just that- it is simple. However, it is far from comprehensive. In fact, there are cases where potassium current inhibition does not cause EADs, and others where potassium currents are augmented and EADs do occur[3,4,7]. The key to the genesis of EADs is not the duration or magnitude of the various currents that make the action potenatial, but rather the timing of channel openings8. The classic example to contradict the simplistic idea of EAD genesis is the antiarrhythmic drug amiodarone, which acts via potassium channel blockade and causes QT prolongation, but does not produce EADs or increase TdP risk7,9. Since the occurrence of EADs is not solely determined by the duration of the action potential, it follows that the risk of TdP is not solely determined by the QT interval.

Although much basic science and clinical research have brought into question the validity of using QT prolongation to determine TdP risk, the message has been lost in translation to the bedside. In the clinic or hospital setting, too much weight is put into the baseline QT interval when deciding whether a drug can be used. A recent clinical study has shown that the degree of QT prolongation does not correlate to the baseline QT interval10. Another study has proposed the use of the Tp-e (amount of time from peak to end of the T wave) or the Tp-e/QT ratio as indicators for arrhythmia risk, regardless of whether they occur in presence of long QT, short QT, or unchanged QT11. Yet another study proposes the use of three EKG criteria- T wave flattening, reverse use dependence of the QT interval, and instability of the T wave- to determine whether a drug is arrhythmogenic. This study cites a better sensitivity to arrhythmia risk and an earlier onset in changes as compared to QT prolongation. This set of criteria even stands tall in the face of the paradoxical situations of prolonged QT and decreased arrhythmia risk- as with amiodarone use7. When the day comes that QT prolongation is deemed unsatisfactory, better alternatives exist.

The study of arrhythmias has advanced significantly over the years, but unfortunately the clinical practice has lagged behind. The major shortcoming of arrhythmia treatment in the clinic has been tunnel vision. For example, in the landmark CAST trial, Na+ channel blockade was used to prevent post-MI premature ventricular complexes. However, the study had to be terminated because of increased mortality- which was partially a result of arrhythmias [3,12]. The lesson from that trial should have been that a multi-faceted problem involving a variety of players cannot be eliminated by targeting one of them. Unfortunately, a similar approach has been taken in using QT prolongation as a marker for TdP risk. The factors that influence arrhythmogenesis are far too numerous to focus on only one, and a new, more comprehensive approach should be considered.

One comment on “Nothing QT (Cute) about it: rethinking the use of the QT interval to evaluate risk of drug induced arrhythmias”