Ordinary yet Privileged Citizens Cannot Repeat the Mistakes of the Past. 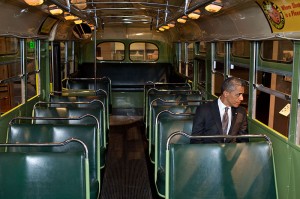 A Commentary By Antonella Surbone MD PhD FACP, Ethics Editor on the Article Bidil: The Future of Medicine or A Return to the Dark Past?

On April 18, 2012, President Barack Obama during his campaign was photographed on the bus that Rosa Park was riding on December 1, 1955 when she refused to give up her seat for a white passenger.

“I just sat there for a moment, President Obama said, and pondered the courage and tenacity that is part of our very recent history, but is also a part of that long line of folks — sometimes nameless, oftentimes didn’t make the history books — but who constantly insisted on their dignity, their stake in the American Dream.” He later added: “It takes ordinary citizens to bring about change, who are committed to keep fighting and keep pushing, and keep inching this country closer to our highest ideals.” [1]

As physicians and scientists, we are ordinary yet privileged citizens: our role is often key in bringing about changes, not only in the medical field but also in society at large. Dr. Christopher Velez’s powerful piece on BiDil and is a very valuable contribution understanding race-based research and I strongly recommend that others read and reflect on it. [2]

As Dr. Velez’s writes, racial categories are mostly social constructs that are rarely descriptive of inherent traits. [3] The terms “African American” or “black” derive “from the tormented relationship the United States had with slavery as the first modern republic based on democratic rule that excluded officially until the 1960s one segment of the demos: people of West African ancestry. ” [2]

An unclear understanding of terms such as genetics, race and ethnicity, and conflation of these terms, plagues many of today’s medical studies. [4] This conflation is a source of unsound research methods and thus suspect results, and it repeats historic mistakes of which we can justly be ashamed. Many such studies are ill-designed, when not entirely biased. Furthermore, the role played by culture, along with race and ethnicity, is still underestimated and unexplored in them. [3]

We know that genetic traits influence various aspects of illnesses and/or individuals’ response to treatments. For example, knowing the high prevalence and penetrance of certain BRCA mutations in Ashkenazi Jews can lead to genetic testing and possible prevention or early detection of cancers, especially breast and ovarian cancers in women. [5] The fields of pharmacogenomics and individualized medicine are based on refining our understanding of genetics traits that determine the prognosis, as well as the best treatment course, for many illnesses, including aggressive types of cancer. [6-8]

Yet, another aspect to consider is the role of culture in disease causation and response to treatments. Culture goes beyond race and ethnicity to encompass beliefs and values, dietary habits, life styles and socio-economic factors that deeply affect the way in which genetics and environment intertwine. [3] We know that triple-negative breast cancer, a form of breast cancer carrying a poor prognosis, is especially frequent in African-American women in the US and that this may be related to differential expression of certain biomarkers. [9,10] Yet we also know that breast cancer survival is lower in African-Americans, as compared to Whites, and that this is in large part due to delayed diagnosis, which in turn is related to cultural and socioeconomic factors that limit the access of minorities to cancer screening, prevention, treatment and research. [11]

Dr. Velez’ s concludes that without moving past the darkness of the 20th century, we will not be able to explore the full promise of genomics in the 21st century and its application to better disease prevention, management, and treatment, or to demonstrate the true aspirations of our profession: caring with compassion and expertise for all sick persons through the rational and unbiased application of new knowledge, thus contributing to the advancement of our society. [2]

The photograph of President Obama sitting in Rosa Parks’ bus has been interpreted by some conservative commentators as symbolic of his loneliness. To me, the image is symbolic, rather, of many Americans being set apart, still, to face prejudice and discrimination, even if in more subtle forms than those practiced in a not so distant time. They are our patients and we have pledged to treat every sick person equally to the best of our abilities. Any medical treatment or research that perpetuates the mistakes of the past flouts our professional and ethical duty as doctors.

2. Velez C. BiDil: The Future of Medicine or a Return to a Dark Past? Clinical Correlations, May 2012. https://www.clinicalcorrelations.org/?p=5513

4. Kagawa-Singer M. From genes to social science: impact of the simplistic interpretation of race, ethnicity, and culture on cancer outcome. Cancer 2001; 91(suppl): 226–232.

One comment on “Ordinary yet Privileged Citizens Cannot Repeat the Mistakes of the Past.”