Is a VBG just as good as an ABG? 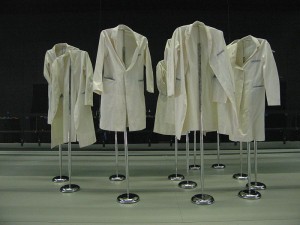 A rapid response is called overhead. As white-coated residents rush to the patient’s bedside, the medical consult starts to shout out orders to organize the chaos. “What’s the one-liner?” “Whose patient is this?” And of course, “Who’s drawing the labs?” Usually, at this point, the intern proceeds to collect the butterfly needle, assorted colored tubes, and the arterial blood gas (ABG) syringe. If lucky, there’s a strong pulse. The intern pauses, directs the needle, and hopes for that pulsatile jet of bright red blood to come through the clear tubing. If successful, a sigh of relief. If not, a wave of defeat and more butterfly needles are scattered across the bed as multiple residents attempt to get the elusive arterial blood.

Obtaining the ABG is considered almost a rite of passage for the medicine intern. However in ill patients with thready pulses, it can be difficult to obtain. Also, getting the ABG is not without its complications. Significant pain, hematoma, aneurysm formation, thrombosis or embolization, and needlestick injuries are all risks [1]. Given these risks, the question is whether we are subjecting our patients to undue pain and potential complications when a venous blood gas (VBG) would suffice.

An ABG provides important data including the pH, arterial oxygen tension (PaO2), carbon dioxide tension (PaCO2), arterial oxyhemoglobin saturation (SaO2), lactate, and electrolytes. In certain instances, an ABG is considered unequivocal. In order to calculate an A-a gradient, the ABG is necessary. To assess whether that HIV patient with PCP pneumonia needs steroids, we use the A-a gradient to help guide out treatment plan [2]. However, are there other patient populations in which the VBG is just as good as the ABG?

Brandenburg and Dire investigated whether venous pH could replace the arterial pH in the initial evaluation of patients with diabetic ketoacidosis (DKA) [3]. 61 emergency room patients were initially enrolled based on a finger stick greater than 250, a urine dipstick positive of ketones, and a clinical suspicion for DKA prior to lab tests. An ABG and VBG were subsequently drawn as temporally close to each other as possible. 44 episodes of DKA were identified after acidosis was established by an arterial pH less than 7.35. Among these cases, the mean difference between arterial and venous pH values was 0.02 (range 0.0 to 0.11) with a Pearson’s correlation coefficient (r) of 0.9689. Pearson correlation (r) determines the extent to which values of two variables are proportional to each other. Ranging between -1 and +1, an r closer to -1 represents a strong negative association while an r closer to +1 shows a strong positive correlation. This study concludes that venous blood gas measurements accurately demonstrated the degree of acidosis in patients with DKA.

However, the accuracy of the VBG becomes more controversial in patients with exacerbations of chronic pulmonary diseases. In 1991, Elborn et al followed 48 patients during the recovery phase of their chronic pulmonary disease exacerbations (12 with pulmonary fibrosis and 36 with chronic obstructive lung disease) to see whether there were significant differences between the venous and arterial partial pressures of carbon dioxide [4]. Simultaneous blood samples were taken from the radial artery and from the dorsal hand vein and were analyzed immediately. Results showed that there was no significant difference between the two CO2 tensions (PaCO2:41+/-9.5mmHg and PvCO2 42+/-10.6mmHg (r=0.84, p<0.001). However, perhaps a more meaningful study would compare the arterial and venous PCO2 values in patients during the initial stage of exacerbation, when PCO2 levels may lead to more significant management decisions.

A more recent study in 2002 investigated whether venous pCO2 and pH could be used to screen for significant hypercarbia in emergency room patients with acute respiratory disease [5]. The aim of the study was to evaluate the agreement between venous and arterial pH and pCO2 and to see if there is a cut-off level of venous pH or pCO2 that could accurately screen for significant hypercarbia. The study uses limits of agreement (LOA) and a Bland-Altman plot to assess the agreement between the ABG and VBG. These are considered more comprehensive statistical methods than the Pearson’s correlation to assess agreement between the two tests [6]. The LOA states that there is a 95% chance that the difference between the venous and arterial value will fall within +/- 1.96 of the standard deviation. The Bland Altman plot takes this further and graphs the difference of each point, the mean difference between the points, and LOA on the vertical axis against the average of the two ratings on the horizontal axis. The plot demonstrates not only the degree of agreement but also assesses whether the agreement occurs more frequently for smaller or larger values, thereby assessing bias as well.

The investigators included 196 patients presenting with respiratory illness with potential ventilator compromise and deemed by a physician to require ABG analysis. COPD, pneumonia, cardiac failure, asthma, and suspected pulmonary embolism were the top five diagnoses of the study population. Both an ABG and VBG were then taken with “minimal delay.” 56 (29%) had significant hypercarbia, defined as a PaCO2 greater than or equal to 50mmHg.

The venous pH was 0.034 lower than the arterial pH with an LOA between -0.10 and +0.04. The venous pCO2 was 5.8mmHg higher than the arterial pCO2 with an LOA between -8.8 to 20.5, which was considered by the study investigators to be unacceptably wide. However, the authors stated that a venous pCO2 of 44mmHg had a sensitivity for detection of hypercarbia of 100% and a specificity of 57%, thus making it an effective screening test for hypercarbia. Although I agree that an LOA between -8.8 to 20.5 appears to be too broad, the study (as is the case with the remaining literature) does not address whether using a venous pCO2 with a wide LOA makes a difference in patient outcomes. However intuitively, as clinicians, we would be hard-pressed to depend solely on the VBG for management decisions knowing that this wide range exists.

Given the discrepancy between the arterial and venous values, other investigators have attempted to create an equation that could accurately predict ABG values from a VBG result. Rudkin et al studied 385 trauma patients requiring ABGs to see if venous pH and calculated base excess (BE) were similar to those values in an ABG [6]. A priori, 15 physicians blinded to the study hypothesis set a consensus single threshold of <0.05 pH units and a variance in BE <2 as the greatest accepted difference between an ABG and VBG. The authors acknowledge that these thresholds are purely clinical and are not based on validated outcome measures. The predictive equations obtained from linear regression models for pH and BE were considered inadequate as only 72% of subjects fit within the predefined acceptable range for pH with a unacceptably wide LOA at -0.11 to -0.10 pH units and 80% of subjects fit within acceptable parameters for BE with also an unacceptable LOA at -3.9 to 4.4 BE units. In addition, the predictive equations fit the validation data better for healthier patients (higher pHs and normal or positive BE).

Another population of interest is the mechanically ventilated. In 2005, Malinoski et al studied 30 consecutive intubated trauma patients to see if central venous pH, pCO2, and BE were comparable to their corresponding arterial values [1]. When an ABG was drawn to assist in ventilator management, a VBG was also obtained. The indications for intubation varied (neurologic (60%), respiratory (24%), and hypotension (16%)). When the two values were compared, the following was noted: pH, R=0.92, P<0.001 and 95% LOAs of -0.09 to 0.03; pCO2, R=0.88, P<0.001 and 95% LOAs of -2.2 to 10.9; and BE, R=0.96, P<0.001 and 95% LOAs of -2.2 to 1.8. The authors in this study also concluded that the LOAs represented clinically significant ranges that could affect important management decisions in a critically ill population.

On the other hand, lactate, a prognostic value in the critically ill [8], has been shown to be equivalent to its venous counterpart. In 2000, Lavary et al studied 375 patients and compared arterial and venous lactates and showed that there was no significant difference between the two [9]. The correlation was 0.94 (95% CI 0.94 to 0.96, p = 0.0001). They also showed that the effect of a tourniquet was negligible although the exact time of tourniquet use was not mentioned.

ABGs are considered the gold standard by clinicians to assess acid-base status, ventilation, and oxygenation. However, obtaining the ABG is not without risks namely patient discomfort, hematoma, and/or thrombosis. If we can obtain the same information with a VBG, which carries fewer risks, we should opt for this choice instead. As mentioned, the ABG is considered unequivocal when measuring the A-a gradient especially if it leads to important management decision (i.e. the use of steroids in PCP). Through this review, other populations that would likely benefit from an ABG over a VBG are patients with severe hypercarbia and those on mechanical ventilation. The margin of error between arterial and venous samples is the largest among these populations, but it is still up for debate whether these differences are clinically significant. Until there is definitive evidence to support not getting the ABG in these populations, most clinicians will likely err on obtaining the ABG to gain as much information as possible.