Should I Consider Antibiotics in My Patient with Irritable Bowel Syndrome? 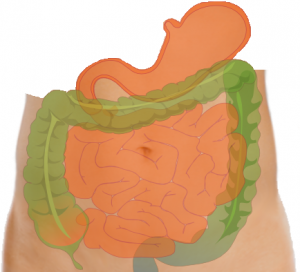 The story of a patient with multiple office visits due to uncontrolled abdominal pain, bloating and diarrhea/constipation is common among primary care doctors and gastroenterologists. The workup is often extensive and rules out many etiologies. After discovering no metabolic, inflammatory, or anatomic pathology, physicians use the Rome III criteria to diagnose irritable bowel syndrome (IBS). IBS is a functional bowel disorder that is diagnosed by symptoms of recurrent abdominal pain or discomfort for at least 3 days per month in the last 3 months and associated with 2 or more of the following: 1) improvement with defecation, 2) onset associated with a change in frequency of stool, or 3) onset associated with a change in appearance of stool. The prevalence of IBS is striking: in North America, studies have estimated that 10 to 15 percent of the population have IBS.[1] Surprisingly, IBS is second only to the common cold for causes of missed workdays. The cost of IBS-related healthcare and disease burden are estimated to be $30 billion a year in the US.[2] Given the high prevalence and cost to our society, many researchers are working to understand IBS pathophysiology and treatment management.

Over the decades, many etiologies have been suggested based on clinical exam findings and lab/test results. Current research focuses on 4 features that can be found in patients with IBS: 1) altered gut motility, 2) visceral hyperalgesia, 3) psychodynamic disturbance and 4) infectious/inflammatory reaction. Treatment strategies have centered on dietary changes and/or medications that target the first 3 features. Anticholinergics (antispasmodics) slow down gut motility, serotonin receptor antagonists modulate visceral hyperalgesia, and antidepressants ameliorate brain-gut disturbances. Many patients remain unresponsive to all available treatment modalities and therefore researchers continue to search for a unifying mechanism that will guide the development of more efficacious treatments.

Motivated by a report of high bacterial counts in the small intestines of IBS patients,[3] researchers searched for a link between IBS and small intestinal bacterial overgrowth (SIBO).[4] When there are disruptions in intestinal peristalsis, colonic bacteria can migrate into the small intestine and cause symptoms very similar to IBS: abdominal pain, bloating, and diarrhea. A 2000 study by Pimentel and colleagues showed that a majority of IBS patients (~80% of whom underwent lactulose hydrogen breath testing) suffered from SIBO, and a large number of patients (48%) had symptom improvement with SIBO eradication.[4] Although this unblinded study suffered from many methodological flaws (several different antibiotics, no placebo arm, 30% follow-up), a subsequent double-blind, randomized, placebo-controlled study confirmed that decreased lactulose breath test results correlated with symptom improvement in IBS.[5] However, over the past 10 years, researchers have questioned the validity of lactulose breath test ing.[6] Unfortunately, the “gold standard” of SIBO is equally marred by technological confounders.[7] Despite this significant controversy, the connection between SIBO and IBS was exciting for doctors and patients because it offered a unifying organic mechanism for a functional bowel disorder.

Ten years after the first report, led by the same lead investigator, the results of two multi-center, phase III, randomized, double-blind, placebo-controlled trials (TARGET1 and TARGET2) looking at the effect of an intestinal antibiotic on diarrhea-predominant IBS patients were published in the New England Journal of Medicine.[8] This study found that a 2-week trial of rifaximin (550 mg PO tid) significantly reduced global IBS scores compared to placebo. As secondary endpoints, the study showed that rifaximin significantly decreased bloating, abdominal pain, and stool frequency compared to placebo. This was the first study to use rigorous methodology and large sample sizes to investigate the role of antibiotic treatment in IBS. In addition, it was the first study to show that the effect endures for a long period of time (3 months) post-treatment.

Given these promising results, one would think that treating all diarrhea-predominant IBS patients with rifaximin would be an option to consider. However, there are many concerns that were not addressed in this study. The most striking observation is the response rate to placebo. Remarkably, 31.7% of patients reported relief of symptoms that lasted over the entire 12-week period. This should not be all that surprising, given that a previous study showed that patients significantly improve in IBS symptoms when they knowingly take a placebo.[9] Given this high response rate with placebo, do the side effects of a 14-day course of rifaximin outweigh the risks of alternative courses of treatment? Although the authors do not report any cases of C difficile infection or significantly different rates of gastroenteritis, nausea, or vomiting, there is the long-term population risk of creating antibiotic-resistant bacteria for a condition that is not life-threatening and has other treatment options. Using rifaximin is particularly risky because its structural similarity with rifampin can lead to the development of rifampin-resistant staphylococci. [10]

Another concern with the study is the small absolute risk reduction from using antibiotics in IBS. In this study, the absolute risk reduction is 10% (number needed to treat [NNT]=10 patients). Consistent with this, a recent meta-analysis of rifaximin in IBS also produced an NNT of 10.[11] It is hard to justify a NNT of 10 when a previous meta-analysis showed equal or lower NNT values for antispasmodics, fiber, and peppermint oil (5, 11, and 2.5, respectively).[12] Consistent with the brain-gut theory of IBS, a meta-analysis for antidepressant treatment found a NNT of 4,[13] and the study that looked at placebo administration also found a NNT of 4.[9] How can one recommend antibiotic administration when it is significantly less efficacious than antispasmodics, peppermint oil, antidepressants, and placebos?

Another major concern is the promotion of a therapy without proving causation or correlation. If the beneficial effect of rifaximin were due to SIBO eradication, ideally the study would have looked at a clinical measure that could be followed and correlated with clinical symptoms. Although the lactulose hydrogen breath test does not have high sensitivity or specificity, a correlation between a decrease in breath hydrogen levels and improvement of symptoms would significantly strengthen the argument that SIBO is a component of IBS. Without this evidence, it remains highly possible that rifaximin has targets other than bacteria, and these targets are in fact responsible for the 10% benefit that we see in IBS patients. Take, for example, the case of the drug amantadine. At first it was used as an antiviral agent against influenza A. However, it was later found to be helpful in patients with Parkinson’s disease, not because the flu causes Parkinson’s disease but because amantadine also blocks NMDA receptors. Although as doctors we like to think that the drugs we use have only one effect, very few drugs have one target in the human body (antibodies being the exception).

So should you try antibiotics in your patient with IBS? Despite the many concerns, I would argue that if your patient is not responding to conventional treatments, complains of bloating with diarrhea, and you’ve ruled out all organic causes, then a 14-day trial of rifaximin can be offered. The dilemma that I cannot answer is what to do when your patient comes back 6 months later with relapsed symptoms. The FDA is similarly apprehensive and has denied the application for the use of rifaximin in IBS. However, they have approved the design of a longer trial that will look at retreatment data and decide again if rifaximin should be approved for use in IBS patients. The results of this future study are highly anticipated because they will provide insight into the rates of IBS relapse post-rifaximin therapy as well as long-term side effects of frequent rifaximin use.

2 comments on “Should I Consider Antibiotics in My Patient with Irritable Bowel Syndrome?”