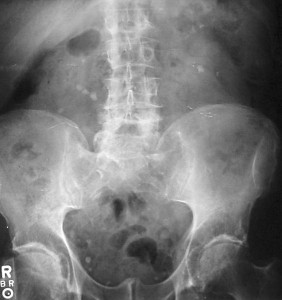 Climate change has been linked to a variety of adverse effects on human health, effects that are expected to worsen in the coming decades [1]. For example, a heat wave in August 2003 resulted in nearly 15000 deaths in France, and the anticipated increase in average world temperatures is expected to lead to longer and more frequent heat waves that will disproportionately affect our more vulnerable populations. Infectious disease outbreaks, particularly vector-borne ones such as malaria, are expected to rise with global warming [2]. Wild swings in weather patterns, including large-scale flooding and droughts, will more likely occur. Smog and particulate air pollution, both of which lead to pulmonary disease and increased mortality, are expected to worsen [3, 4]. Agriculture production may be greatly impacted in certain regions of the world, raising the possibility of widespread famine [5].

Some of these effects are obvious, while others may surprise the reader. NYU nephrologist David Goldfarb has spoken of a possible link between climate change and the rising incidence and prevalence of yet another disorder—kidney stones. Kidney stones, also known as nephrolithiasis, are linked to a number of factors including diet, infection, and hereditary conditions like cystinuria. However, the link between climate change and nephrolithiasis has also been studied, and a literature review turns up a number of articles that touch on this question.

An intriguing report by Brikowski et al. in the Proceedings of the National Academy of Sciences (PNAS) [6] describes a “kidney stone belt” along the southern United States. Stone disease may be as much as 50 percent more prevalent in southern states when compared to the northwest, and according to the authors, much of this difference is attributed to differences in mean annual temperature (MAT). The authors predict that with global warming, by 2050 we will see a climate-related increase of approximately 2 million lifetime cases of kidney stones in the country, primarily in the south.

What is the mechanism? Kidney stones can form in response to metabolic and environmental factors, including low urine output from decreases in fluid intake or from increases in insensible fluid loss, mainly from sweating. When urine saturates, stone forming salts become concentrated and precipitate. The thought is that higher temperatures make people more prone to low urine output, making them more prone to stone formation.

However, the link between temperature and stone formation is not entirely clear. Some data suggest that the relationship behaves in a nonlinear fashion; that is, stone formation peaks at a certain MAT and then plateaus at higher temperatures (perhaps because people are less active at these higher temperatures). Other data suggest that the correlation is more linear. For their study, the authors employed both linear and nonlinear models using large survey datasets.

In both models, the authors of the PNAS article find that the “kidney stone belt” will grow, with the percentage of people living in high-risk zones increasing from 40 percent to 56 percent by 2050. They also estimate that the cost of treating this increase in kidney stones will cost the United States an additional $1 billion annually, not accounting for inflation.

Fakheri and Goldfarb [7] reanalyzed some of the data used in the PNAS study. They took the original data used by Brikowski’s non-linear model and graphed the prevalence of kidney stones with MAT, broken down by gender. They were able to show a greater association of kidney stones and increased temperature among both menand women though the effect on men was more marked. The authors speculate that this may be because men are more likely to have occupations that expose them to higher ambient temperatures. However, it has also been suggested that perhaps women are better able to keep up with fluid losses than men, via an unclear mechanism [8].

However, a cross-sectional survey of American soldiers returning from service in the Middle East, many of whom were likely to have been exposed to high temperatures, actually demonstrated a lower rate of nephrolithiasis (1%) compared to the general population (2-3%) [9]. The military emphasizes forced hydration to prevent heat injury, and this may be the reason why a lower rate was seen. They did find an increase of stone disease in people who have a previous history of kidney stones, and also people with a family history of the disease.

Clearly, more evidence is needed. A causal mechanism for temperature and kidney stone formation makes intuitive sense – higher temperatures make people more prone to dehydration and low urine output, encouraging stone formation. However, stone formation is a multifactorial process, and diet plays a large role as well. Diet and obesity have also been shown be strongly linked to stone formation. [10] However, the southern United States, which tends to get more kidney stones, also has a higher overall rate of obesity compared to the north. This is one obvious potential confounder.

Another suggested mechanism is that increases in sun exposure (specifically UV light) leads to the increased production of 1,25-OH-vitamin D, which in turn increases the absorption of dietary calcium and possibly the excretion of calcium in the kidneys [11]. Another potential confounder certainly, however this mechanism is largely unproven and one would expect people to try to avoid the sun during times of higher temperature.

In addition to obtaining data that control for these confounders, data that show a tighter link between temperature and stone formation would be helpful. Instead of using mean annual temperature, a study that looked at the incidence of stone formation by month, or to average monthly temperature would provide more convincing evidence for an association. However, conducting that study may be complicated by the fact that stones may take months to develop before they become clinically significant. They may start to form in the hot summer days, but patients may not present with symptoms until months later. Clearly, more work is needed to establish a link between climate change and this common and very painful disease.