The answer to the mystery quiz is pulmonary Mycobacterium kansasii infection. The patient’s clinical presentation of fevers and night sweats suggested an infectious process or B symptoms due to lymphoma. The initial chest radiograph (image 1) demonstrated a left hilar mass which was noted to be larger on a subsequent chest radiograph (images 2 and 4)) 1 month later. This increase in size over a short duration again suggested an infectious etiology. Importantly and a key to the case, the CT images demonstrated unilateral hilar lymphadenopathy with regions of central low attenuation and evidence of enhancingrims following intravenous contrast administration (image 5). The low density areas may represent caseous or possibly liquefication necrosis. Additionally, there is a mixed reticulo-nodular and airspace infiltrate lateral to the enlarged left hilum (image 6). These radiographic findings are strongly suggestive of  mycobacterial disease associated with HIV infection, especially in patients with severely reduced CD4 cell counts. In New York City, M. tuberculosis would be most likely, followed by M kansasii which may be indistinguishable from M tuberculosis on imaging. M avium complex is less likely to cause an inflammatory reaction of this degree in patients with AIDS; pneumonitis and lymphadenopathy are relatively uncommon in this setting. The presence of M avium complex is more often a marker of severe immunocompromise in HIV patients. Culture is required for definitive diagnosis, but nucleic acid testing can suggest the diagnosis before culture results are available. Other differential diagnostic considerations include pulmonary Kaposi’s sarcoma with intrathoracic lymphadenopathy, but unlikely without cutaneous disease, and lymphoma, which typically lacks the low-density attenuation seen here.Without a history of residence in an endemic area, Histoplasmosis is also unlikely.

M kansasii is a common cause of non-tuberculous mycobacterial lung disease in HIV positive patients.Tap water is thought to be the most likely environmental source of exposure, and person-to-person transmission does not occur. Affected individuals are typically severely immunosuppressed with CD4 counts less than 50/cmm. The clinical and radiographic features closely resemble that of M.tuberculosis. Classically, patients present with fevers, night sweats, weight loss, productive cough,and dyspnea. Treatment generally includes isoniazid, rifampin, and ethambutol, but trimethoprim-sulfamethoxazole, macrolides, and floroquinolones have also proven to be efficacious. 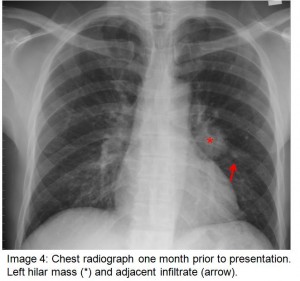 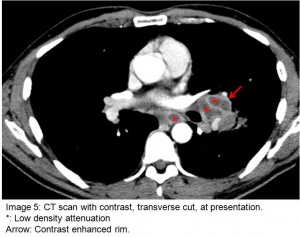 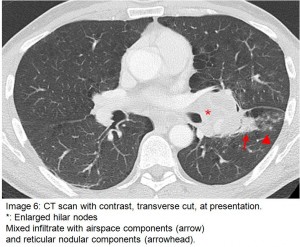