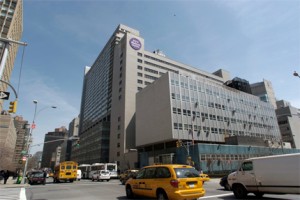 As the 3 major teaching hospitals that make up NYU Medical Center begin to come back online, we thought it was the right time to share some of our reflections on Hurricane Sandy.  It’s been a long strange journey for the faculty, housestaff, students and most of all our patients.  It’s time now though for us to come back home; to return with a renewed sense of purpose and a new appreciation for our institution.

As the East River lapped over the FDR and poured into our hospitals, high winds slammed against the buildings with vengeance, and the lights flickered off, text messages from fellow residents poured in: “Backup generators failed” “Evacuating NYU” “Three hours of power left at Bellevue.” The Manhattan VA was the only behemoth on our “superblock” of three institutions to fully evacuate before the storm. At NYU Langone Hospital, nurses, physicians, and staff, later with the help of the NY Fire Department, carried patients down dozens of flights of stairs to awaiting ambulances that took them to neighboring city hospitals for continued medical care.

Amidst the foreboding darkness, hundreds of Bellevue employees came together in the little used stairwell, passing tubs of gasoline up thirteen flights of stairs to keep the power pumping through the veins of the only generators spared from the river’s crest. Teams were set up near patients on ventilators and medication drips in case all power failed, and immediate mechanical bagging was needed. And while these stories are indeed impressive and heartwarming, it is the precedent that they set and the trend that followed that will forever be ingrained in my memory of this monstrous hurricane.

In the days just after the storm and the hurried evacuation of NYU, Bellevue Hospital trudged along. First, main sources of power went down. Then, the running water stopped. Radiology was unavailable, and only a single lab test could be run. There were no phones or electronic medical records accessible. This meant that all the streamlining and integration of technology that we strived so hard to achieve left us abandoned. In a public hospital known for treating among the sickest and underserved patients, adversity is not a stranger. The natural tempo of Bellevue Hospital is fast and furious. Staff must move swiftly as the patients act quickly. It took the furies of Sandy to press pause on the constantly intense and relentless undertone of Bellevue and to unearth her true soul.

When the lights went out on our superblock, something bigger appeared: a community. More than ever, it was clear. We were all on the same team, with unwavering commitment to patient care. We were stripped of our job descriptions and workplace frustrations, and came together with the common goal of keeping our home intact. People left their still powered houses and nervous families to spend several straight days in the hospital. Offices, call rooms, and closets became scattered with cots and inflatable mattresses. Nurses, PCAs, maintenance workers, and other staff braved the elements and formed transportation pools to get to and from the hospital while the subways and busses were nonfunctional. Despite there being no phones in the hospital, there was no shouting, no yelling. Instead, there was teamwork and communication. People volunteered to trek up ten flights of stairs to fetch someone’s medication without even being asked. A patient’s husband carried several pizzas and liter bottles of soda up seventeen flights, to thank the staff for taking care of his wife. A fellow resident held a flashlight for me as I drew labs from a critical patient amidst the darkness.

Conditions rapidly became dire and, at times, pungent smells of bodily stasis wrapped through the halls. Yet patient care never suffered. As the National Guard crowded floors and patients were lifted onto boards and fully evacuated at marathon-pace, there was a sense of sadness. A 276-year-old institution, arguably the heart of the city’s public health system, would for the first time be without its patients. In the days that followed, Facebook messages equating Bellevue to a home became commonplace. Although we have been scattered throughout the five boroughs, it’s safe to say that the community remained intact. There was immediate kinship between anyone with a link to our three hospitals. And while we are very thankful that our neighboring medical institutions have welcomed us with open arms, we are grateful to be able to now start to come home. The rebuilding process is well underway, and the staff and patients are all ready to restart.