Music Therapy: The Art of Healing 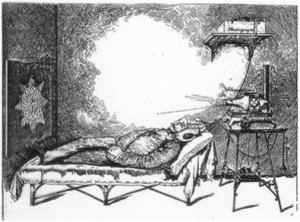 United States congresswoman Gabrielle Giffords was shot in the head over two years ago on January 8, 2011. She was reported to be in critical condition, surviving a bullet that entered her posterior cranium, coursed through her left hemisphere, and finally exited above her left orbit. ABC News reported just a few months after her injury that the congresswoman was already finding ways to communicate, despite permanent and significant damage to her speech center. Through the use of music therapy, Ms. Giffords developed new pathways for communication, and with techniques such as speech stimulation and melodic intonation therapy, she found new methods of expression.[1] Music therapy has proven so effective for her, in fact, that there is speculation that she may run for congress again later this year.

WHAT IS MUSIC THERAPY?

While some care providers simply provide pleasant background music for their patients, others employ licensed music therapists. According to the American Music Therapy Association (AMTA), a music therapist, who has completed a degree in music therapy from among the 70 AMTA approved college and university programs and who has passed a national board certification exam in music therapy, creates a musical curriculum. This is tailored to the individual patient and involves taking an initial assessment of the patient and subsequently “creating, singing, moving to, and/or listening to music“ with the patient.[2]

THEORY BEHIND MUSIC AS THERAPY

Why is music such a powerful healing tool? Is it purely the relaxing and anti-stress properties of listening to a Chopin prelude? Perhaps it is creating music oneself that makes one forget his or her daily troubles. Or is it more scientific than that, the answer lying in certain neurotransmitter pathways and brain rewiring?

Dedicated researchers like neurologist Robert J. Zatorre, PhD, in Montreal, Quebec, have attempted to understand the scientific effects of music on the brain. Through the combined used of positron-emission tomography (PET) scanning and functional MRI (fMRI) imaging, researchers in Dr. Zatorre’s laboratory demonstrated specific neurochemical responses to music. During anticipation of music, patients demonstrated release of dopamine from the caudate, a part of the striatal system involved in emotional integration, learning, and memory. While listening to music, during their “peak emotional response” (demonstrated by autonomic nervous system changes such as chills or changes in heart rate), patients showed increasing dopamine release in the nucleus accumbens, an anatomical area of the brain associated with pleasure and reward.[3] In a similar German study using fMRI, the effect of unpleasant (dissonant) music on emotion was analyzed. When dissonant music was played to study participants, imaging displayed activation of the amygdala, hippocampus, parahippocampal gyrus, and temporal poles, all areas of the brain that have historically been involved with the processing of negative emotions.[4] These studies emphasize the strong interplay between music and emotion.

One can imagine how pleasant music may be beneficial for one’s mental state. It is the clinical effect of music beyond mental health, however, that is harder to grasp and consequently more difficult to study. Despite this, music therapy has been shown to be effective in the management of a wide variety of ailments in patients of all ages from infants to the elderly. Music has helped with communication and socialization of children with autistic disorders [5], tinnitus [6], relief of acute, chronic, and cancer pain [7-9], decreasing aggressiveness and inappropriate behaviors in elderly patients with dementia [10-12], improving quality of life in terminally ill patients [13-14], and even relief of chemotherapy-related nausea and vomiting [15], to name a few.

One study conducted by Thaut et al at the Center for Biomedical Research in Music in Colorado exposed music therapy to patients who were undergoing rehabilitation after suffering from traumatic brain injury.[16] The music therapy consisted of a single-brief thirty minute music interlude between a pre-test and post-test neurologic assessment of attention, memory, executive function, and emotional adjustment. These patients showed an improvement in executive function, as well as less overall depression, anxiety, and sensation seeking.[16] Due to the specific patient population tested and the small number of subjects (n=31 in the treatment arm), however, the results of this study are not generalizable to the population, and the long-term effects of music therapy cannot be determined. Nonetheless, the study results are encouraging and suggest that further investigation should be done.

RAS seemed to serve as the most promising intervention as it had a significant effect on gait in two studies, proving beneficial for stroke patients’ gait velocity as well as length and symmetry of each stride.[18,20] In the one study that used SIPARI® as a voice training technique, patients with aphasia showed significant speech improvement.[19] Another trial using amnestic patients after severe brain injury found that playing participants’ preferred music in live and taped formats effectively reduced agitation and improved orientation.[21] These studies, however, are single-blind controlled studies, and their clinical applicability is therefore uncertain.[17]

Due to the limited number of studies and the fact that each study varied in its patient population, intervention, and measured outcome, no official recommendations have been made for any interventions with music therapy. More studies are necessary to determine clinical applicability of different types of music therapy for different disorders, including neurologic injury. Current studies, however, are promising, and music is a benign, cost-effective, and easy intervention to employ. There seems to be no harm in using music as a therapeutic tool until the benefits of music therapy are better established. Music therapy can strengthen an individual in countless ways, and in some cases, as with Congresswoman Giffords, it can help to provide an avenue of communication for those who have difficulty with words.

Dr. Chelsey Forbess is a 2012 graduate of NYU School of Medicine

11. Gerdner LA. Effects of individualized versus classical “relaxation” music on the frequency of agitation in elderly persons with Alzheimer’s disease and related disorders. Int Psychogeriatr 2000; 12:49.

One comment on “Music Therapy: The Art of Healing”