Down-And-Out With Diabetes: Caring For The Homeless Diabetic Patient 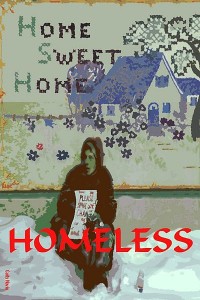 Each year in the US, an estimated 2.3–3.5 million individuals are homeless [1]. Homelessness has a complicated association with poor health. People at risk for losing their home tend to have heavier disease burdens. In New York City, 6.3% of a subset of newly homeless people had diabetes mellitus, compared to 1.9% of the same age group in the general US population [2]. In return, homelessness poses unique challenges to receiving and adhering to treatment for diabetes. The rewards of overcoming these challenges are better metabolic control and better outcomes [3]. So, how can doctors anticipate the difficulties that homeless patients face when struggling to manage diabetes, and how can we help?

Limited access to health care is problematic for many Americans, and homeless patients are not exempt. Interestingly, during an 18-month study of a group of newly homeless people in New York City, the percentage of participants who had health insurance climbed significantly; many had been eligible for Medicaid prior to becoming homeless but were not enrolled until they made contact with the shelter system [2]. Still, data suggest that many homeless people in the US lack health insurance and seek care as needed from emergency rooms [2]. Such encounters are poorly suited to long-term control of diabetes. If access to a primary care provider can be obtained, some recommended interventions should be made within the context of an office visit; these can be accomplished regardless of the disorganization of the world that awaits the patient outside the clinic. Examples are measuring hemoglobin A1c, blood pressure, and lipids; administering influenza, pneumococcal, and hepatitis B vaccinations; and screening for nephropathy, retinopathy, and neuropathy.

The disease-management woes do not end for this population after access to health care has been secured. In a study from Canada, where all citizens have health insurance, glycemic control was inadequate in 44% of homeless diabetics, and 72% of the participants in the study reported difficulty managing their diabetes [4]. For one, the homeless are particularly poor, and the daily measures required of diabetics can be expensive. For example, self-monitoring of blood glucose (SMBG) is recommended for patients who have frequent hypoglycemic episodes or require multiple daily insulin injections [5]. Unfortunately, testing strips cost $0.98 apiece on average; if a patient on insulin carries out SMBG thrice daily, this amounts to $91.14 per month [6]. In contrast, urine strips cost $0.19 apiece and can be cut into smaller pieces [7]. They cannot distinguish between normoglycemia and hypoglycemia, but may help patients to identify hyperglycemia and respond appropriately [8].

In addition to the challenges of poverty, the lifestyle imposed by homelessness is fraught with barriers to good diabetes management. Medical nutrition therapy–with its focus on weight loss, carbohydrate counting, and avoidance of saturated fat –-may be impractical. Despite poverty, the prevalence of obesity is over 30% among homeless adults, and the mean body-mass index is in the overweight range. Possible contributing factors include an adaptive metabolic response to periods of food shortage, sleep debt, and stress [1]. Many homeless people rely on food sources such as soup kitchens or shelters. Food choices tend to be limited, and starch and sugars may be overrepresented as they are less costly. Patients need information to help them choose wisely from the available options. Many food resource centers supply only one meal a day; as a result, patients may have difficulty predicting the time of their meals [9]. Clinicians should therefore think carefully about the individual’s dietary schedule before deciding whether tight glycemic control via insulin administration or sulfonylureas is safe.

Homeless patients who require insulin may not have access to a refrigerator for storage. Without personal storage space, syringes may be stolen by for drug use; at some shelters, syringes may be forbidden [4]. Perhaps because it sidesteps these issues and thus improves adherence, the use of an insulin pen has been linked with improved hemoglobin A1c measurements after 3 and 6 months of use in this population [10].

Foot care is made difficult by poor light in shelters, excessive standing or walking, and footwear that may be of poor condition or fit. Additionally, many patients sleep in chairs; they should be counseled to elevate their legs whenever possible to prevent fluid stasis [9]. If a homeless diabetic patient develops ulcers, but does not require hospital admission, it may be difficult for the patient to convalesce, as some shelters are not open during the day [9]. Clinicians should anticipate this problem and seek help from social work.

Transient homeless patients may not establish a long-term relationship with a single health provider; the Health Care for the Homeless (HCH) Clinician’s Network makes diabetic monitoring cards for patients to carry important information from doctor to doctor [9].

Psychosocial factors should also be considered when choosing therapy. Depression can lead to poor adherence, and is more common among the homeless [11,12]. Additionally, the national rate of substance abuse disorders among the homeless is 50%, predisposing them to liver dysfunction and to lactic acidosis if started on metformin; the existence of substance misuse should be carefully assessed [9]. Patients may have few or no available social supports to help in a hypoglycemic emergency, and shelter staff or other authorities may mistake these episodes as drunkenness [9]. Physicians and patients can work together to educate shelter staff of the signs of hypoglycemia and how to react to them.

Taking care of patients with chronic disease is a joint effort. Both physician and patient have responsibilities, and the weight of these responsibilities increases with the severity of a patient’s diabetes. Unfortunately, some of the same socioeconomic factors that contribute to worse disease may make it even more difficult for diabetic patients to help us help them. Patients’ perception of diabetes control is positively correlated with their quality of life [13]. This, as well as the real improvement in outcome that comes with better diabetes control, should motivate clinicians to understand and consider finances, daily routines, and psychosocial health when recommending a diabetes treatment plan for this population.