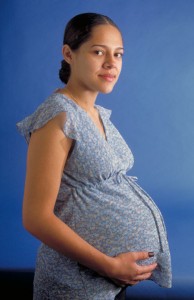 A 35-year-old Hispanic woman presented to the emergency room with severe joint pain and swelling for one week.

The patient had a history of hypothyroidism and hepatitis C which was treated with interferon therapy two years prior. She was recently discovered to be pregnant and, at the time of presentation, was in her tenth week of pregnancy. Three weeks prior to admission she developed a sore throat. She saw an outside care provider who diagnosed her with streptococcal pharyngitis. Her symptoms resolved shortly after starting a ten-day course of penicillin.

Two weeks prior to admission the patient developed pain in her ankles that, over the following days, successively spread to her knees, hips, shoulders, elbows, wrists and hands. The pain did not improve in any affected joints. By the day of admission, the patient had resorted to using a wheelchair and, when she visited her obstetrician, she was sent to the emergency department. For the last two days, her pain had prevented her from walking or using her hands.

On arrival to the emergency room, the patient was in great distress. She was afebrile with tachycardia. She had exquisite pain and decreased range of motion in her ankles, knees, hips, shoulders, elbows, wrists and finger joints. She also had mild erythema and swelling in the affected joints—most notably in the left ankle. She had a soft, systolic murmur over the right upper sternal border. Her laboratory studies were most notable for an elevated C-reactive protein (CRP) and erythrocyte sedimentation rate (ESR) of 214 mg/L and 136 mm/hr, respectively, and a normocytic anemia with a hemoglobin of 9.0 g/dl. Her EKG showed sinus tachycardia. She was given opiates for pain with minimal improvement and was admitted to medicine for further management.

An active infection was thought to be unlikely. Instead, her presentation appeared to be consistent with a post-infectious reactive arthritis and, given her recent history, a post-streptococcal arthritis was high on the differential diagnosis. Further laboratory studies were significant for an elevated anti-streptolysin O (ASO) titer of 703 units/ml, an elevated C3 of 256 mg/dl, an elevated C4 of 58 mg/dl, a negative anti-nuclear antibody, a negative rheumatoid factor, a negative anti-cyclic citrullinated peptide antibody and an absence of cryoglobulinemia. An echocardiogram was unremarkable.

Given these findings, 20mg of daily oral prednisone were started on the evening of day one. The following morning the patient reported a vast improvement in her pain and, over the following ten days, her symptoms continued to improve to the point where she could ambulate with minimal difficulty. Her ESR and CRP normalized and her ASO titer decreased to 604 units/ml. On the day of discharge, she had mild residual tenosynovitis in her right wrist. She was prescribed 20mg prednisone twice daily to be tapered as an outpatient.

The presentation of arthritis following streptococcal pharyngitis is often considered to be a manifestation of acute rheumatic fever (ARF). Poststreptococcal reactive arthritis (PSRA) is a clinically distinct entity from ARF and can often manifest with arthritis alone. Much like ARF, development of PSRA is less common in the context of a properly treated streptococcal infection.[1] Given that the distinction in diagnoses may have important ramifications in treatment and surveillance of these diseases, it is important to understand the following clinical question: What is post-streptococcal reactive arthritis and how does it differ from acute rheumatic fever?

Alternatively, the proposed diagnostic criteria for PSRA includes the following clinical features: 1) an acute arthritis which is poorly responsive to salicylates or NSAIDs, 2) evidence of antecedant group A streptococcal infection and 3) a failure to fulfill the Jones Criteria for ARF.[4] There has been concern, however, that these suggested guidelines may lead to the over diagnosis of ARF and under diagnosis of PSRA as there are a large number of patients who meet the Jones Criteria with 1 major criterion and 2 minor criteria (e.g. arthritis, elevated ESR/CRP and fever) who may be better classified as having PSRA.[5] The absence of a diagnostic “gold standard” to differentiate between these two diseases necessitates that clinicians are forced to rely on criteria more easily delineated in written guidelines than with actual patients.

Case reports have better discerned the specific characteristics that help to distinguish PSRA from ARF. These finding include the observation that ARF is generally a disease of children, most commonly manifesting between 4-9 years of age, while PSRA follows a bimodal age distribution between the first and second decades and the third and fourth decades, respectively. This distinction also separates PSRA from reactive arthritis which has a single peak of distribution between 27-34 years of age. PSRA generally has a shorter latency to onset after streptococcal infection than ARF (within 2 weeks versus 2-3 weeks). The character of the arthritis in ARF is usually migratory and resolves within two weeks while in PSRA it is additive, symmetric, and averages at least two months in duration with reported cases of arthritis lasting as long as eight months. The involved joints, in order of frequency, include the knees, ankles, hips, wrists, shoulders and elbows.1 Finally, the response of ARF to aspirin and NSAIDs is rapid and impressive while in PSRA the benefit of NSAIDs is characteristically minimal.5 Case series from described the complete relief of symptoms after a short course of prednisone although this response has been variable in the literature.[6,7]

Both ARF and PSRA are autoimmune reactions. It appears that the M-protein of the offending streptococcal agent has homologous sequences to cardiac myosin and laminin and this molecular mimicry is believed to explain, in part, the cardiac manifestations of ARF through the induction of antibodies that recognize these sequences and subsequently induce an inflammatory response. On the other hand, antibodies against the M-protein have also been shown to react with joint cartilage and synovium—a finding that may suggest a unique mechanism the inflammatory reaction that occurs in PSRA.[5]

Alternatively, there is no evidence to support antibiotic prophylaxis in patients with PSRA.5,6 One large study on PSRA followed-up adult patients not receiving prophylaxis with transthoracic echocardiography for nine years and found no increased incidence of valvular heart disease compared to normal controls.9 There has been no randomized controlled trial evaluating the use of prophylactic antibiotics in patients with PSRA. Still, despite a lack of evidence, the American Heart Association recommends prophylaxis for up to one year followed by re-evaluation for valvular disease to make a decision for further prophylaxis.8 Some reassurance may be derived from the fact that the risk of cardiac involvement in PSRA appears to be almost non-existent in adults however there is a small risk of cardiac involvement in children. This may be attributable to the misclassification of ARF as PSRA rather than an intrinsic characteristic of the disease. Another explanation is that, similar to ARF in which cardiac risk is inversely correlated with age, this relationship may also extend to PSRA.[5]

In our patient, a transthoracic echocardiogram ruled out any cardiac manifestations of disease and prophylaxis was not initiated given the absence of supporting evidence in the literature. Overall, the long-term prognosis for the patient is excellent. Arthritis in PSRA lasts, on average, approximately two months and only about 19% will have any reccurence.10 Lastly, no literature currently exists on PSRA in pregnancy and, as far as we are able to determine, this is the first such reported case.

2) Special Writing Group of the Committee on Rheumatic Fever, Endocarditis, and Kawasaki Disease of the Council on Cardiovascular Disease in the Young of the American Heart Association. Guidelines for the diagnosis of rheumatic fever: Jones Criteria: 1992 update. JAMA. (1992) vol. 268 (15) pp. 2069-2073   http://www.ncbi.nlm.nih.gov/pubmed/1404745