The DLO: Does FFP Correct INR? 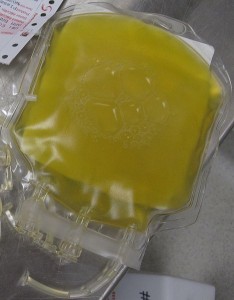 By Nicole A Lamparello, MD

Page from the hematology laboratory: critical lab value; INR 1.9. Liver biopsy scheduled for tomorrow. What is a knowledgeable physician practicing evidence-based medicine to do?

Fresh frozen plasma (FFP) is the liquid, acellular component of blood. FFP contains water, electrolytes, and the majority of the coagulation proteins [1]. It is frequently transfused to patients with an elevated prothrombin time (PT), a measure of the activity of the common coagulation pathway (involving factors X, V, prothrombin and fibrinogen) and the activity of the extrinsic pathway (involving factor VII). In clinical practice, PT is better understood using the international normalized ratio (INR), which takes into account variability due to different thromboplastin reagents. Most commonly, FFP transfusions are administered in an effort to “correct” coagulopathy and prevent the risk of bleeding.

In the very recent past, indications for transfusion of FFP included prophylaxis in non-bleeding patients with acquired coagulation defects prior to invasive procedures. Less than eight years ago, guidelines from the New York State Council on Human Blood and Transfusion Services approved the use of prophylactic FFP transfusions in patients with a PT or aPTT greater than 1.5 times the normal range [1, 2 ]. However, an examination into the literature suggests that FFP does not correct INR, and in fact, prophylactic FFP transfusions do not result in fewer bleeding events.

One of the first studies to examine the effect of large volume FFP transfusions in correcting INR was in 1966 by Spector et al. Thirteen patients with liver disease were given 3-9 units FFP. The PT in only eight patients decreased to within 60% of normal activity. This effect was short-lived as elevation of coagulation factors declined by 50% within the first 2-4 hours after transfusion [3]. Forty years later at Massachusetts General Hospital, a study examined a larger cohort of 121 patients. The patients had an INR between 1.1-1.85 and a repeat INR within 8 hours after receiving FFP. The main indications for transfusion were pre-procedure with elevated INR and bleeding with elevated INR. Results showed that normalization of INR (INR <1.1) occurred in only 0.8% of patients and halfway to normalization of INR occurred in only 15% of patients [4]. On average, INR decreased by only 0.07.

Further, a retrospective study by Holland and Brooks introduced the use of a control group to examine the effect of medical treatment alone on mildly prolonged coagulation factors. In this study, 224 patients receiving 295 FFP transfusions and a control group of 71 patients were included in the analysis. Findings showed that mildly elevated INRs (1.3-1.6) decrease without FFP via supportive care and treatment of the underlying medical condition after a median time of 8.5 hours. The proposed mechanism for the “natural correction” was thought to be related to the treatment of dehydration, anemia and metabolic disturbances which had led to organ hypoperfusion, systemic hypoxia and pH abnormalities[5]. Interestingly, a linear relationship was discovered to predict the change in INR per unit of FFP:

While pre-transfusion INR was predictive of the response to FFP, the strongest response was found when pre-transfusion INR was greater than 2 and not for mild elevations in INR. FFP treatment was minimally effective in correcting mild elevations in INR <1.7 [5]. While there may be a consumptive process occurring that depletes factors at a quicker rate than they are replaced by FFP transfusions, another likely explanation is the that the dose of FFP may be inadequate. Standard doses of FFP are in the range of 15-30mL/kg. In a 70-kg patient, a transfusion of 2U of FFP is only 400-450mL or 6mL/kg. With this volume, the coagulation factors are only expected to increase by 6% and would be unlikely to change INR significantly [6]. In order to achieve hemostatically adequate coagulation factor levels (20-30%), patients would need to receive a much large volume of plasma, which could represent a potential problem in many patient populations especially already volume-overloaded critically ill patients.

Regardless of the guidelines, mild elevations in INR may be normal. When interpreting the INR, as in any laboratory value, it is important to remember that the “normal range” of INR, 0.8-1.2, represents 95% of individuals. 5% of healthy individuals fall outside the reported reference range. Additionally, INR levels may be influenced by multiple factors. Most commonly, elevated hematocrit has a proportionally reduced volume of plasma, and therefore the ratio of anticoagulant to plasma is increased, resulting in a prolonged bleeding time and spurious elevation in the INR [8]. It is important to recognize the limitations of the INR. INR is validated for patients who are stably Coumadin anticoagulated, but not for patients with coagulopathy of liver disease or isolated factor VII deficiency. In the latter settings the interlaboratory agreement may be poor and the bleeding risks poorly correlated with INR.

The purpose of FFP transfusion is to lower the risk of bleeding in patients with coagulopathy. However, studies have found no difference in bleeding events in patients receiving FFP compared to those not. In a retrospective study of 115 patients, 44 critically-ill, non-bleeding patients received FFP. Only 36% of this group had an INR “corrected” or reduced to <1.5 and received approximately 12mL/kg of FFP. 71 patients did not receive FFP. Results showed no statistically significant decrease in INR or bleeding episodes, hospital deaths or length of stay in ICU [9]. Even more interesting, the group receiving FFP had a statistically significant greater incidence of new-onset acute lung injury, 18% vs. 4%, p=0.021. Which begs the question, what are the risks of FFP, especially when the benefits are seemingly slim to none?

While infection is a well-known but rare risk of blood product transfusion, other risks of plasma therapy include severe allergic reaction, transfusion-associated volume overload which is the most common, and transfusion-related acute lung injury (2). Between 2005 to 2008, transfusion-related acute lung injury (TRALI) was the leading cause of transfusion-associated death, responsible for 35% to 65% of all fatalities [10]. TRALI represents the acute pulmonary pathology occurring within six hours of transfusion and presenting with tachypnea, cyanosis, hypoxemia, and decreased pulmonary compliance [11]. Plasma-containing products are most frequently involved in TRALI, and FFP was the most commonly transfused product in TRALI fatalities, accounting for 51 out of 115 fatalities, or 44% [10]. One strategy in place at many blood banks to reduce TRALI risk is to use male only plasma donors.

There is a large proportion of inappropriate FFP use in medical institutions, a glaring example of which is the reversal of Coumadin anticoagulant effect in patients undergoing elective procedures or surgery due to scheduling constraints. Usage of FFP in non-bleeding patients with acquired coagulation deficits is more often dictated by convention rather than rationally based approaches. Furthermore, physician uncertainty in a medico-legal society leads to practicing “precautionary medicine.” In the eyes of many clinicians, the alternative of not transfusing patients and the risk of bleeding seems comparatively less desirable. However, awareness of the harmful consequences of FFP usage must be underscored among healthcare providers.

What is the take home message? Review of recent evidence suggests that FFP does not correct mild elevations in INR, much less reduce INR beyond several hours. Furthermore, elevation of INR does not predict bleeding in the setting of a procedure nor does prophylactic FFP transfusions result in fewer bleeding events. Given the absence of evidence of the benefit of FFP in correcting INR in conjunction with the known risks of FFP, FFP transfusion to non-bleeding patients with mild elevations in INR cannot be supported.

2 comments on “The DLO: Does FFP Correct INR?”