The Complicated Story of Saturated Fat 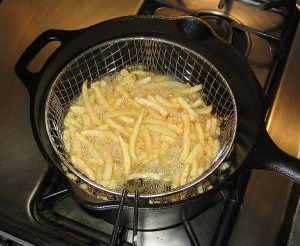 Everyday in clinic, we tell our patients to choose foods low in saturated fat. Because these foods raise plasma cholesterol, the thinking goes, they cause heart disease. Today, every major medical organization – from the American Heart Association to the Harvard School of Public Health to the USDA [1-3] – recommends a diet low in saturated fat to prevent and treat heart disease. The fat-cholesterol-heart disease connection is so thoroughly integrated into both medicine and popular culture that it’s become dogma. But since the initial data on saturated fat and cholesterol were published, our understanding of heart disease and cholesterol has significantly improved. We’ve moved from looking at total cholesterol to measuring LDL, HDL, and triglycerides. And as we better understand the pathophysiology of vascular disease, we may start to move away from cholesterol and directly measure lipoproteins instead.[4] But even as our risk factor assessment has evolved, the diets we recommend to our patients have not. Are we due for a more nuanced approach to evidence-based dietary recommendations? Let’s take a look at the evidence.

The first hypothesis that saturated fat might cause heart disease was developed more than a half century ago from data on the eating patterns of various nations. Back in the 1950s, researchers noted the epidemiologic relationship between heart disease and saturated fat consumption.[5,6,7] These associations were reinforced by data from the Framingham Heart Study which showed an association between hyperlipidemia and heart disease.[8] Critics at the time noted flaws in the original epidemiologic research, pointing out that additional available data would eliminate the saturated fat-heart disease association.[9] And while the Framingham study did find that cardiovascular disease was five times more likely for men with cholesterol over 260 than under 200, there was no difference between these groups in the type or quantity of fat consumed. The investigators also noted that cholesterol has “no predictive value” for women. And data on plasma cholesterol doesn’t necessarily tell us much about the effect on heart disease. A 1969 report from the National Heart, Lung, and Blood Institute stated, “It is not known whether dietary manipulation has any effect whatsoever on coronary heart disease.”[10]

Dietary research is notoriously hard to carry out. Researchers often rely on food frequency questionnaires to determine what participants in the study ate. Trusting their data requires placing faith in the ability of patients to recall exactly how frequently they eat various types of food. Many researchers believe these questionnaires to be a totally unreliable method of quantifying what people actually eat.[11] Investigations on institutionalized patients provide a way around this data collection conundrum. The Finnish Mental Hospital Trial and the Los Angeles Veterans Adminstration Study are the two most well known papers in this area. The Finnish trial was a crossover study looking at patients in two psychiatric hospitals in Helsinki; one hospital served its patients full fat milk and butter while the other served unsaturated vegetable oils and filled milk (milk that has been filtered and had its fat replaced by emulsified vegetable oil). At the end of 6 years, the hospitals switched diets. The Finnish study found a 50% relative risk reduction in cardiovascular mortality (although no change in total mortality) in male patients fed the low saturated fat diet.[12] Critics of the Finnish study have noted that the study was poorly controlled: almost half of the participants either entered or left the study over its 12 year duration and sugar consumption varied by more than 50% over the course of the trial. The Los Angeles VA study found an 18% relative risk reduction in cardiovascular deaths by replacing animal fat with vegetable oil, but no difference in overall mortality.[13]

While many of the studies investigating the effect of diet on health look at proxies for cardiovascular disease like cholesterol levels and blood pressure instead of measuring hard outcomes like cardiac events and mortality, others confound the effect of dietary changes by measuring the effects of multiple simultaneous interventions. The most famous example of this is Dr. Dean Ornish, who has demonstrated an incredible impact on cardiovascular disease through his research on comprehensive lifestyle changes.[18] Dr. Ornish attributes the effect to his ultra low fat diet, but his is still a hypothesis waiting to be rigorously tested.

Caveats abound in the research on diet and heart disease and we must take caution before drawing conclusions about healthy eating. When counseling our patients, it is vital to remember that decreasing saturated fat changes two variables in the food consumption equation: the removal of saturated fat and the addition of something else to replace it. Indeed, the replacement that our patients choose is likely to be the factor that determines whether a reduction in saturated fat consumption is helpful or harmful.

A look at some other populations provides useful context. When the Tokelau people, Pacific Islanders who consume more than half of their calories from saturated fat, migrate to New Zealand, their saturated fat consumption goes down by half. But their rates of heart attack go up.[19] The Masai, an African tribe, are another excellent example. When they are young, they eat a diet almost exclusively composed of blood, milk, and meat, at least one third of calories from saturated fat.[20]  As they get older, the Masai that continue this diet are remarkably free of atherosclerosis, even after age 60.[21] But those Masai that reduce their consumption of these substances high in saturated fat and replace them with flour, sugar, and shortening begin to develop atherosclerosis.[22]

A 2011 Cochrane Review found that replacing saturated fat with unsaturated fat can reduce relative risk of cardiovascular events by 14%, which equates to a 1% absolute risk reduction over two years.[26] This is a modest, albeit significant benefit for a major lifestyle change. So we should be open with patients about the magnitude of risk reduction from adopting our proposed dietary recommendations. And we should also be careful about how we frame the changes, being honest about the risk they face by substituting carbohydrates for saturated fat.

This absolute risk reduction is one of the most important take home points when thinking about evidence based dietary recommendations. Smoking cessation and blood pressure control are likely to be lifestyle interventions with a greater magnitude of benefit than saturated fat reduction. We should allocate time in our clinical practices to discuss lifestyle modification, but we should also be mindful of the absolute benefits that we hope to attain.

Dr. Gregory Katz is a 2nd year resident at NYU School of Medicine

One comment on “The Complicated Story of Saturated Fat”