From The Archives – The Hangover: Pathophysiology and Treatment of an Alcohol-Induced Hangover 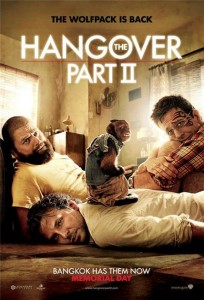 Please enjoy this post from the archives, dated May 27, 2011

The sunlight forces its way into your eyes, stabbing at your cortex. Suddenly, a wave of nausea and diarrhea grips your stomach, threatening to evacuate its contents. You rush to the bathroom, tripping over the clothes that speckle your apartment. Your heart pounds inside your chest and your hands shake ever so subtly. Your mind is in a fog and the details of last night’s party are a blur. Sound familiar?

If you’re anything like the millions of people who have ever drunk too much alcohol, you’ll immediately recognize the sordid signs of a hangover. It’s a condition that is well recognized yet poorly understood. Descriptions abound in pop culture and literature, saturating the public consciousness. Yet, a great deal of scientific research has had only limited success in explaining its pathophysiology.

The basic concept is simple. A hangover is secondary to binge drinking, the consumption of an excessive amount of alcohol in a relatively short time period. The National Institute of Alcohol Abuse and Alcoholism defines binge drinking as a rise in blood alcohol content (BAC) to greater than or equal to 0.08% within two hours, or more simply, the consumption of at least four (for women) or five (for men) alcoholic beverages in a single drinking session.[1] Of note, most people who binge drink consume far more than 4-5 drinks, imbibing an average of eight per night. [2] Binge drinking is extremely common, especially among young adults, and remains the leading cause of death each year among college-aged students in the US, [3] with similar worldwide rates of problematic alcohol use across Europe, South America, and Australia.[4] The dangers of consuming too much alcohol are obvious. Among other things, motor vehicle accidents, sexual assaults, and violence are more common among the acutely intoxicated. [5] A hangover, however, is largely regarded as an annoyance. It is defined as that which occurs after the acute intoxication has subsided, reaching its greatest intensity as the BAC approaches zero. It lasts for up to 24 hours and consists of a myriad of signs and symptoms, from constitutional (fatigue and malaise) and gastrointestinal (loss of appetite, diarrhea, and nausea), to nociceptive (headache and myalgias) and autonomic (tachycardia and tremor). Sleep disturbances, including increased slow-wave and decreased REM sleep, and neurocognitive symptoms, such as decreased attention and memory problems, are also common.[6] Furthermore, the impairment of one’s psychomotor performance can be substantial. In fact, if you think sobering up is sufficient for safely driving home, you may be wrong. Studies have shown that individuals who suffer from hangover symptoms have a decreased ability to operate a motor vehicle. [7], [8] Combined with the loss of work days and decreased productivity from hangovers, perhaps this annoying day-after affair isn’t so benign after all.

So what is the pathophysiological explanation for a hangover? If a hangover is secondary to the clearance of ethanol from the body (when BAC is equal to zero), isn’t it the same phenomenon as acute alcohol withdrawal? The answer, quite simply, is no. Alcohol withdrawal is secondary to the development of physiological alcohol dependence over the course of many drinking episodes, whereas the hangover occurs after one night of drinking and does not require alcohol dependence. Another possibility is that that a hangover may be the result of the direct effects of last night’s extracurricular activities. That is, a hangover may be the lasting effects of electrolyte imbalances, hypoglycemia, and dehydration, which persist longer than the ethanol itself. Unfortunately, studies have shown little correlation between hangover symptoms and serum electrolytes, blood glucose, or markers of dehydration such as antidiuretic hormone and renin. A similar argument has been made for acetaldehyde, a metabolic breakdown product of ethanol that has vasodilatory and gastrointestinal effects on the body. Again, limited evidence has been found linking acetaldehyde levels with hangover severity.[9] Perhaps understanding the effect of alcohol consumption on the immune system will elucidate the underlying cause of the hangover. A number of studies have shown that following a night of heavy drinking there is an upregulation of cytokines and prostaglandins. Specifically, increased plasma levels of interleukin-10, interleukin-12, and interferon-gamma were measured in individuals suffering from hangover symptoms long after their last drink. Prostaglandin E2, thromboxane B2, and C-reactive protein were similarly increased. Most importantly, the serum levels of these inflammatory markers were directly related to the degree of hangover symptoms.[10] This association has been supported by evidence that treatment with cyclooxygenase inhibitors leads to a decrease in these inflammatory factors and a subsequent decrease in hangover symptoms.[11] Unfortunately, this finding has not been regularly repeated in well-designed studies.

While the exact biological basis of a hangover may remain somewhat of a mystery, there is good evidence that certain factors exacerbate hangover symptoms. Certainly, sleep deprivation and the simultaneous consumption of other psychoactive substances worsen hangover symptoms. Perhaps less intuitively, so does the type of alcohol, even if two drinks contain the same alcohol content by volume. Simply put, darker liquors generally cause worse hangover symptoms. It is thought that this is due to so-called congeners, byproducts of the fermentation process related to the different casks and grains used. For example, amber-colored bourbon has a congener level of 37 times that of vodka, causing worse hangover symptoms than its clearer cousin.[12] At the end of the day, hangovers are unpleasant, to say the least. While a Google search for hangover remedies reveals thousands of hits for reportedly “clinically-proven” cures, there are really no good options. No evidence supports B vitamins, tomato juice, or fatty foods.[13] Other, more colorful options, such as the use of artichoke extract, reveal no difference between the study group and the control group.[14] The one bright spot? Prickly pear (Opuntia ficus indica) extract has been shown to decrease the inflammation associated with hangovers and the subsequent incidence of nausea, dry mouth, and anorexia.[15] As you may have suspected, however, the most important factor in preventing a hangover remains abstinence or moderation. In other words, avoid binge drinking entirely. Alternate alcoholic and non-alcoholic beverages or spread your alcohol consumption over a longer period of time.