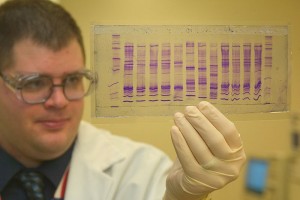 In reference to the $100,000 he spent to research the genetic basis of the pancreatic cancer that ultimately killed him, Steve Jobs famously said, “I’m either going to be the first to be able to outrun a cancer like this, or I’m going to be one of the last to die from it” [1]. Mr. Jobs was interested in finding the specific genetic mutations his tumor contained so as to allow doctors to optimize his drug therapy. Now other genetic tests that purport to tell patients their risk of certain diseases are becoming increasingly prevalent. With the rapidly decreasing cost of at-home genetic testing, what once seemed like technology reserved only for science-fiction movies like Gattaca may soon be a typical purchase for people eager to learn more about their genetic risk factors. A company called 23andMe recently made genetic testing available directly to consumers for a mere $99 [2]. Consumers submit a saliva test to the company to have their DNA analyzed for the million most important single nucleotide polymorphisms (SNPs) regarding ancestry, genealogy, and inherited traits [3]. Some might consider this a small price to pay to have this kind of knowledge; others may not want to know this information for fear of finding out they are at increased risk for a significant disease. Nevertheless, direct-to-consumer (DTC) genetic testing is now at a price affordable to many Americans and could have significant implications for preventive medicine in the near future.

23andMe is just one of several companies offering direct-to-consumer genetic testing. iGENEA, DNA Tribes, FamilyBuilder, deCODEme, Navigenics and others are also in the business [4]. When Angelina Jolie learned that she tested positive for the BRCA1 and BRCA2 gene mutations, putting her at increased risk of breast and ovarian cancers, she underwent prophylactic bilateral mastectomy, prompting a national dialogue on genetic testing and preventive care [2]. Will this type of genetically informed decision-making become more common as these tests become more widely available? If so, are certain segments of the population more likely to use these genetic tests? What will be the impact of the results of these genetic tests on patient behavior? At present, very little empirical evidence is available to answer these questions and explain how these tests will affect healthcare use and behaviors.

Most of the data regarding DTC genetic testing come from surveys; randomized-controlled trials are difficult to apply to this setting. Much of future research will come from cohort studies to determine outcomes and preventive measures taken by patients who underwent DTC genetic testing [5]. One survey of 1048 people who completed DTC genetic testing showed that 43% of the respondents sought additional information about a health condition screened for in the genetic test. Twenty-eight per cent discussed their results with a healthcare professional, and 9% underwent additional lab tests. To better understand the survey participants’ risk tolerance, their answers were stratified based upon their perceived colon cancer risk (low, medium, or high). Those who identified as “high risk” were significantly more likely to have sought information about a disease, discussed results with a physician, changed their diet, or started exercising more [4].

Another study of 2240 participants in the Scripps Genomic Health Initiative, a prospective longitudinal cohort study of adults who purchased the Navigenics Health Compass—a commercially available genomic test—showed that over a third of the test recipients shared their results with their physicians. Interestingly, the study also found that screening tests were not associated with long-term psychological risks. Most participants reported that they perceived the tests to be of high personal utility. Also, while this survey showed that the participants had no increase in anxiety after finding out the results, they did not consistently make lifestyle changes in terms of fat intake or exercise [5].

Genetic tests alone may not be enough to convince patients to make healthy lifestyle changes. The results of these two surveys indicate that different people have different perceptions of good health and health risk. Moreover, the data suggest that these differences in patient-perceived health risk and disease susceptibility lie at the root of health-related behavioral change. Those who felt that they were at low risk for a particular condition were less likely to seek out more information or to discuss their genetic test results with a healthcare professional. Personal and family histories of disease were positively associated with lifestyle changes after testing. Understanding the interplay between an individual’s perceived risk (through a combination of personal and family medical histories) and results of DTC genetic testing may offer primary care clinicians a new tool to prevent or better manage chronic disease and promote preventive health behavior.

The promise of direct-to-consumer genetic testing comes with a caveat, however. Through testing, patients can directly access very specific and complicated health information without a physician present to provide much-needed context. The legal and ethical implications of this information have yet to be defined [5]. For instance, who is responsible for following up an abnormal test result? Is there an obligation to share information about genetic risk with other family members who may potentially benefit from that information?

Researchers have attempted to examine the consistency of the results among the tests offered by different companies. A group of epidemiologists simulated genotype data using the methods of 23andMe, deCODEme, and Navigenics for 100,000 individuals and 6 diseases: age-related macular degeneration, atrial fibrillation, celiac disease, Crohn’s disease, prostate cancer, and type 2 diabetes. All of these diseases are known to have various SNPs with different effect sizes that contribute to the disease phenotype. Their analysis ultimately found that predicted risks differed substantially between the companies based on differences in the choice of SNP studied, average population risk estimates, and their individual formulas to calculate risks [7]. The data indicate that there may be strengths and weaknesses to each company’s approach, but ultimately the best algorithm will not be known until a longitudinal study is done on the actual predictive capacity of each test in real patients.

DTC genetic testing is a new frontier in medicine. Despite the promise of new information that could guide preventive care, doctors may be hesitant to recommend these commercial tests for fear that the results may be inaccurate or inconsistent. Furthermore, these tests are not supported by significant long-term research nor do they have the blessing of the FDA. The medico-legal questions that will inevitably arise from the disclosure of genetic information to insurance companies and the financial risks to individual policyholders will also need to be thoroughly considered. Direct-to-consumer genetic testing may have come a long way in the last decade due to scientific advancements, but it still has a long way to go before it becomes a routine part of everyday healthcare.

The author introduces us to an increasingly popular and heavily promoted area of healthcare: personalized medicine. Companies offering the consumer the ability to map his or her genome and to assess individual risk to specific diseases have proliferated. However, they have done so without significant evidence of consistency of results, benefit to patients, or cost-effectiveness. In November 2013 the FDA’s division on medical devices issued a cease-and-desist warning to the 23andMe. In its letter to the company, the FDA voiced significant concern that the testing offered by this company failed to demonstrate reliability and effectiveness [8]. 23andMe now offers “ancestry-related” rather than “health-related” genetic reports.

Of even more concern are the ethical considerations with DTC testing. Although many common diseases are due to a combination of genetic and environmental factors, testing oneself for genetic abnormalities inevitably provides information on other family members who share significant amounts of genetic material. This could result in a loss of privacy by inferring one’s genetic risk from the test results of one’s family members. There are other ethical and legal issues that are too numerous to discuss here.

As practicing clinicians, when we order a test for a patient, we should always ask ourselves how the result will affect our management. As with any new diagnostic modality, there comes the ability to learn ever more information, but is that newly acquired information worthwhile? The Roberts study showed that people who were more risk-averse and felt themselves to be at higher risk of poor health outcomes were more likely to act upon the results of their genetic testing [5]. Would these same health-conscious patients behave in the same manner without testing?

DTC genetic testing, with its shotgun approach for looking for complex diseases and reductionist attempts to quantify risk, is indeed a new frontier. Its promise of personalized medicine has yet to be realized. Consequently, both the clinical and public health communities should be wary.