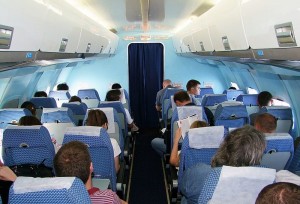 It’s become a familiar site to travelers: airline passengers wearing respiratory masks to filter pathogens from the cabin air. To those not wearing masks, the fashion trend can be discomfiting. Are the mask-wearers paranoid or prudent? What is the probability of contracting an illness on an airplane? And how unique is the aircraft environment when it comes to disease transmission?

It is clear that due to lower air exchange rates and decreased sunlight, enclosed spaces such as buildings and transport vehicles are more susceptible to the transmission of infectious particles than are the outdoors.[1] Aircraft cabins are particularly worrisome due to high occupant densities and long exposure times. Well-documented outbreaks of tuberculosis, influenza, severe acute respiratory syndrome (SARS), and norovirus are alleged to have occurred during air travel.[2][3][4][5] All of these diseases are transmitted via either large droplets or aerosolization.[6]

Quantifying the risk of disease transmission for a particular contagion in an aircraft cabin has proven difficult. In a 2005 review published in the Lancet, Mangili et al. argued that there is insufficient data to perform a proper meta-analysis on the risk of transmitting any particular disease.[6] Furthermore, they noted that many of the available epidemiological studies are compromised by reporting bias secondary to incomplete passenger manifests, complicating risk assessment.

In 2012 Gupta et al. performed the most recent in a series of computational fluid dynamics (CFD) simulations to quantify the rate of influenza transmission in an aircraft cabin.[7] A CFD is a computer algorithm that analyzes fluid flow (in this case, airflow within a simulated aircraft cabin). CFD models are very complex, and the aircraft simulation mentioned above took four weeks of computational time over eight parallel processers to simulate just four minutes of airflow. The authors looked at what would happen if one subject infected with influenza coughed, exhaled, and talked on a plane. Using a code called FLUENT, the authors analyzed the dispersion pattern of exhaled droplets emitted from the infected passenger. By inserting this data into a mathematical equation, they attempted to estimate the relative probability of any given passenger on the aircraft becoming infected, accounting for both temporal and spatial variations in the transmission of particles.

To decipher the results of the simulation, it is helpful to understand some basic characteristics of aircraft ventilation. First, air circulation on airplanes is not random or uniform. On most commercial aircrafts, systems are designed so that air circulates in a side-to-side (laminar) pattern, with very little front-to-back or back-to-front (longitudinal) airflow.[8] This means that two passengers breathe the same air if they sit in the same row or in adjacent rows, but not if they sit several rows apart.

Second, the air on airplanes is actively ventilated and filtered. A typical commercial aircraft recirculates 50% of the air delivered to passengers, and this air passes through a high efficiency particle air filter (HEPA) before reentering the cabin.[6] HEPA filters are 99.97% effective at removing particles greater than 0.3 units of measurement in size from the air.[9] These filters effectively remove dust, vapors, bacteria, fungi, and the droplets via which most viruses are spread. The air on a typical aircraft is recirculated more often and filtered more often than the air in a typical office building.[6]

So, what were the results of the CFD simulation? The infected (index) passenger was sitting in seat 4D. When the index passenger coughed, the infected droplets moved backwards to row 5 and then towards the windows. The passengers with the highest risk of exposure were those sitting directly adjacent to the index passenger, and those sitting towards the windows in row 4 (the index row) and row 5. This pattern is consistent with previously described models of airflow in aircraft cabins, in which air is directed from the center towards the sides of the plane.[6]

Respirator masks reduced the probability of a given passenger becoming infected during the simulation. N95 respirators, commonly utilized by health professionals and increasingly worn by the general public, have been shown to be effective barriers to the transmission of airborne and large droplet-borne infections.[10] Gupta et al. calculated the decrease in exposure risk that a respirator would provide by estimating the number of infectious particles in a typical droplet and combining that data with the filtration efficiency of common respirator masks.[1] They estimated that in their simulation, the number of secondary infections would be reduced from three to zero if all of the passengers wore respiratory masks.

Of course, the ubiquity of contemporary air travel poses additional global health challenges. Someone infected with a disease endemic to a particular region, say polio in India, can easily hop on a plane and transmit the disease to a non-endemic region. A well-publicized example of this is alleged to have taken place in the early 1980s, when Gaetan Dugas, a flight attendant and one of the first documented cases of HIV, helped spread the virus throughout North America and Europe.[11] Airplanes can also harbor unwanted, non-human passengers, such as insects and other disease vectors. Cases have been documented of people from Florida and Virginia, without any history of foreign travel, contracting malaria.[12] “Airport malaria,” in which infected mosquitoes hitch a ride on an airplane and infect people in non-endemic countries, usually within the vicinity of an airport, is a real, albeit rare occurrence.

So should you wear a mask on your next flight? Nothing suggests that you are more likely to catch an illness on an airplane than in any other enclosed space. An aircraft cabin actually may even be safer than the average office building because its air is filtrated so frequently. Perhaps the reason people feel vulnerable to infections on airplanes is the same reason people feel vulnerable on airplanes in general: there can be something unnerving about moving five hundred miles per hour, forty thousand feet above the ground. Still, unless you are ready to start wearing an N95 respirator mask in all enclosed spaces, it probably does not make much sense to wear one specifically on an airplane.

[8] Gerencher CL. TRB Conference Proceedings: Research on the Transmission of Disease in Airports and on Aircraft: Summary of a Symposium. TR News. 2011.  http://trid.trb.org/view.aspx?id=934654