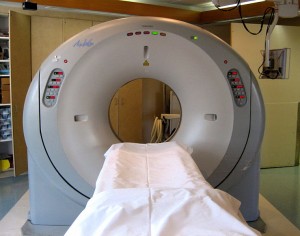 The U.S. Preventive Services Task Force (USPSTF) recently finalized its position regarding annual low-dose computed tomography (LDCT) scanning for early detection of lung cancer. The grade B recommendation states that individuals between the ages of 55 and 80 with a 30 pack-year history or more of smoking who are current smokers or who have quit within the last 15 years should undergo annual LDCT screening, based on the results of the National Lung Screening Trial [1]. Lung cancer is the leading cause of cancer deaths in the United States and accounts for as many cancer deaths as breast, prostate, colon, and pancreatic cancer combined. Every year, 160,000 patients will die from lung cancer [2]. Nearly 60% of patients will have metastatic disease at the time of diagnosis and the combined 5-year survival rate for all types of lung cancer is only 17% [3]. An effective screening test for lung cancer could significantly improve survival rates. Randomized controlled studies of screening patients at high risk of lung cancer based on age and smoking history with chest X-rays and sputum samples did result in earlier detection of more lung cancers but unfortunately failed to demonstrate improvement in mortality rates [4]. The advent of dose-modulated CT scanning has allowed for a more sensitive and specific method of examining the lung parenchyma and opened up the possibility of truly effective lung cancer screening. In 2012, the National Lung Screening Trial (NLST), the largest and most expensive randomized controlled trial of a screening test ever undertaken, was completed. The trial enrolled over 50,000 current and former smokers aged 55 to 74 with a 30 pack-year or greater history at 33 centers nationwide and is the basis for the recent USPSTF recommendation [5]. The subjects were randomly assigned to either low dose LDCT or chest X-ray for 3 consecutive years. Positive screening results were then followed up with diagnostic procedures. Overall, the study found a 20% reduction in lung cancer mortality in the LDCT group, with 247 deaths from lung cancer per 100,000 person-years in the LDCT group vs 309 deaths per 100,000 person-years in the X-ray group. Estimates done by Ma and colleagues at the American Cancer Society predict that 5.2 million men and 3.4 million women in the United States would meet criteria for screening defined by the National Lung Screening Trial based on data from the 2010 National Health Interview Survey. Given the rate of lung cancer mortality within this population, derived from the National Health and Nutrition Examination Survey (NHANES-III), the authors estimate 12,000 deaths from lung cancer would be prevented annually if wide-scale LDCT screening were implemented across the United States [6]. Using modeling studies based on data from the NLST trial, the USPSTF concluded that screening up to age 80 could extend survival in the absence of serious medical co-morbidities and that only an estimated 10-12% of screen-detected cancers were “overdiagnosed,” meaning they would not have been detected in the patient’s lifetime without screening.

While a 20% reduction in mortality and the potential to avert 12,000 deaths from lung cancer annually are impressive results, screening and subsequent diagnostic and therapeutic interventions are not risk-free. The main drawbacks of screening to the individual patient are radiation exposure, poor specificity (73.4% in NLST), and potential complications of follow-up diagnostic procedures. Overall, the NLST found that LDCT scanning has a positive predictive value of 3.8%, meaning that over 96% of people with a positive scan who potentially undergo further diagnostic workup with additional imaging or biopsy will not have lung cancer. (The USPSTF model estimates a positive predictive value of 5%.) Ultimately, 7% of subjects in the NLST group with a positive scan underwent a biopsy procedure, of whom only 53% had confirmed disease. Given that the average case of lung cancer is diagnosed at age 70, are we willing to subject asymptomatic 55 year olds to additional radiation and potential biopsies as part of the diagnostic workup of a positive scan that is misleadingly worrisome in over 96% of people?

For a certain subset of patients, that risk may be worth it. Kovalchik and colleagues at the National Cancer Institute re-examined the data from the NLST and stratified the subjects in both arms into quintiles based on 5-year risk of death from lung cancer. Stratification was based on a risk-prediction model that weighed mortality from lung cancer vs death from other causes and incorporated validated risk factors for the development of lung cancer including age, body-mass index, family history of lung cancer, pack-years of smoking, years since smoking cessation, and pre-existing pulmonary conditions. Overall, 60% of patients with the highest risk of death accounted for over 88% of preventable lung cancer deaths from screening. They calculated the number needed to screen to prevent one lung cancer death to be 5276 in the lowest quintile vs 161 in the highest quintile [7]. A clinically useful risk stratification tool that further refined selection criteria among heavy smokers aged 55 to 74 to target those at greatest risk would maximize the benefits of LDCT scanning by boosting pretest probability and positive predictive value.

Although formal analysis of the cost effectiveness of widespread screening and subsequent treatment using final data from the NLST has not yet been generated, researchers at Harvard Medical School used preliminary data from the trial released in 2010 to generate estimates of the cost-effectiveness of screening. They found that annual screening of current and former smokers aged 50–74 would cost between $126,000– $169,000 per quality adjusted life year (QALY). By comparison, the authors estimate that smoking cessation therapy costs approximately $17,000 per QALY, given the current quit rates [8]. Additionally, the authors of the NLST point out that screening and subsequent diagnostic workup, including additional radiographic imaging, were done at advanced tertiary care facilities with dedicated chest radiologists and thoracic surgeons, and these necessary conditions may not generalize across the country. The cost and accessibility considerations may be especially relevant, given that the rate of smoking is over 60% higher among individuals below the poverty line (29%) than those above (17.9%) [9]. In an increasingly cost-conscious age of medicine, these estimates make it difficult to imagine that large-scale screening efforts would be economically feasible.

The National Lung Screening Trial clearly demonstrates that annual low dose CT screening of high-risk individuals results in earlier detection and reduced mortality from lung cancer. Yet the high false-positive rate coupled with the additional radiation exposure and the potentially risky follow-up procedures resulting from a positive scan complicate the decision for patients and their doctors on whether to screen. From a societal perspective, it is unlikely that widespread screening of at-risk individuals is cost-effective or even feasible. The National Lung Screening Trial represents real progress in developing an effective screening test for lung cancer, but without further refinement in the selection criteria and development of cheaper, less invasive diagnostic follow-up, widespread LDCT scanning does not yet constitute a viable screening test for lung cancer.