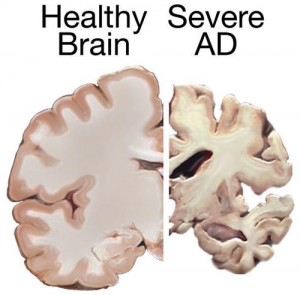 Approximately 5.2 million Americans are currently living with Alzheimer’s disease (AD) [1], with this number expected to triple by the year 2050 [2]. Alzheimer’s disease is now the sixth leading cause of death in the United States [3] and accounts for $100 billion in healthcare expenditures each year [1]. Nevertheless, the most devastating and far-reaching effects of Alzheimer’s disease hit close to home. While those with the disease progressively lose their memory, speech, and independence, it is the caretaker who often bears the brunt of the burden. Not surprisingly, an estimated 23.5% of spouses of a person with Alzheimer’s disease develop clinically significant anxiety and 10.5% develop depression [4]. Overall, the mortality from any cause among caretakers of patients with AD has been found to be higher than controls by up to 63% over 4 years[5].

Alzheimer’s disease is a slowly progressive disease of the brain that affects the hippocampus, frontal cortex and cingulate gyrus [6]. As the disease advances, patients require higher levels of care that often extend beyond the capabilities of family caretakers and result in high rates of patient placement in nursing homes. Preventing and reversing the dementia seen in AD in order to increase quality of life among these patients is the goal of treatment. Nevertheless, the backbone of Alzheimer’s treatment remains acetylcholinesterase inhibitors (CIs) such as donepezil (Aricept), rivastigmine (Exelon), and galantamine (Razadyne). Memantine (Namenda), which is also approved for the treatment of Alzheimer’s disease, is an NMDA receptor antagonist. These drugs do not target the beta-amyloid plaques and neurofibrillary tangles associated with AD, but function by inhibiting the acetylcholinesterase enzyme and thus reducing the rate at which acetylcholine is broken down in the neural synaptic cleft. This net increase in free acetylcholine has been argued to increase memory and other cognitive functions [7]. Doctors have long suspected that these drugs neither reverse pre-existing cognitive damage nor slow down the development of new damage. Instead, CIs temporarily enhance the remaining cognitive function of the patient and mask the full presentation of the existing disease.

Many patients with a new diagnosis of AD are eager to begin treatment with CIs. Often these patients have great expectations regarding the extent to which these drugs will affect their course of illness. It is imperative that prescribing physicians counsel patients and their families about CIs so that patient expectations align with probable outcomes. What does the evidence show about the benefits of acetylcholinesterase inhibitors in the treatment of Alzheimer’s disease?

Numerous studies investigating the effects of CI treatment on AD progression have yielded results that many find disappointing. One such study followed 2853 persons with Alzheimer’s disease to assess for changes in Mini-Mental State Examination (MMSE) score after treatment with donepezil, rivastigmine, or galantamine [8]. By 9 months, only 15.7% of patients responded to treatment, with two-thirds of patients actually demonstrating further deterioration in MMSE score. The strongest predictor of obtaining a positive response to CIs was the presence of an improvement by 3 months. After this time period, the likelihood of clinical improvement was much reduced. Furthermore, increasing doses of CIs were less likely to result in a response to treatment and more likely to cause adverse drug reactions such as heart block, stroke, gastrointestinal distress, and adverse psychiatric changes such as hallucinations. Furthermore, the CRONOS study reported in 2005 that CI treatment has no effect on patients’ abilities to perform the activities of daily living or the instrumental activities of daily living [9], which for many are felt to be among the most debilitating effects of the disease. Of note, many studies that suggest CIs provide significant improvements in cognition often have unclear endpoints or are initiated and funded by pharmaceutical companies with clear incentives to show the efficacy of CIs. The AD2000 study was the first non-pharmaceutically funded study to compare donepezil to placebo, and it found no significant difference in patients’ progression to institutional care, disability, behavioral and psychological symptoms, and other measures of AD severity [10]. When one considers that generic CIs cost an average of approximately $200 per month, it is reasonable to conclude that CIs don’t work well enough to validate their costs, even before one considers their numerous side effects.

Despite these limitations, CIs may have valuable benefits. Studies show that when a person with AD dies while living in a nursing home, the spouse experiences more grief than do the spouses of patients who died while living at home [11]. Fortunately, patients taking donepezil, rivastigmine, or galantamine are more likely to avoid or delay nursing home placement and are thus more likely to continue living at home [12,13]. On average, patients receiving CIs may remain at home under the care of their spouses for almost 2 years longer than non-treated patients [12]. This delay in nursing home placement may be due in part to the fact that patients on CIs are less likely than non-treated patients to experience behavioral disturbances such as destroying property, threatening others, and shouting, and consequently require sedation less often [14]. This prolonged ability to remain at home may help to mitigate the effects of guilt, grief, and depression that caretakers too often experience when they become unable to care for a loved one.

In one study assessing the effect of CIs on the level of distress among caretakers, it was found that the caretakers of patients receiving donepezil reported lower levels of burden of care, even though demand for care remained unchanged from that of patients not receiving the drug [15]. Prior research showed that the ethnicity of caretakers affects reported levels of distress: white parents and siblings of patients with severe mental illness reported a higher level of burden than their black counterparts with the same responsibilities [16]. It is therefore possible that simply reducing the perceived helplessness and loss of hope associated with caring for a loved one with AD, in this case by treating with CIs, is enough to improve the quality of life for caretakers even when no clinical improvements are seen in the patient.

CIs are different than most other drugs in that their effects may benefit the caretaker more than the patient. Providers must consider the ethics of offering CIs for their placebo-like effects or for the benefit of a person who is not the patient. In such a scenario, other potentially safer drug alternatives can be considered. Some evidence shows that memantine may be equivalent to donepezil in slowing decline in neuronal density, dementia scales and other markers of dementia [18]. In turn, Vitamin E, a natural, cheap, and safe alternative, has been shown to be superior to memantine in slowing decline in patients with mild-to-moderate AD [17]. If a prescriber or family members wish to use CIs, most commonly a trial of benefit will be used in order to gauge whether the drug should be continued. With grey lines separating helpful from harmful, it is important to make the distinction between disease as a biological process and illness as a human experience. In this case, we may not be able to treat the disease, but we can ease the experience. Perhaps most important to patients and caregivers dealing with AD is practical advice and help through support groups and advocacy organizations such as the Alzheimer’s Association, that can reduce frustration and assist families during challenging times. Although science continues to work towards developing a drug that will treat the pathology behind AD and more effectively slow decline among patients with AD, the benefits of CIs, their alternatives, and strong social support not only include improved quality of life for patients and their caretakers, but also the immeasurable benefits of hope and empowerment that render the effort therapeutic.