The Rise in Tick-Borne Diseases: Is Climate Change Responsible? 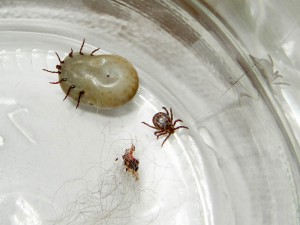 In 1998, the list of reportable tick-borne pathogens in the US included Rocky Mountain spotted fever, tularemia, Lyme disease, human granulocytic ehrlichiosis/anaplasmosis, and human monocytic ehrlichiosis. All of these illnesses, except for tularemia, have since increased in annual incidence and many more have been added to the list [2]. Lyme disease, for example, increased 101% from 9908 reported cases in 1992 to 19,931 cases in 2006 [10]. The cases reported to the Centers for Disease Control and Prevention (CDC) are only a sliver of the actual incidence of these infections. In a recent press release, the CDC announced preliminary estimates from 3 studies indicating that around 300,000 Americans are diagnosed with Lyme disease each year [1]. This estimate is about 10 times greater than the number of annual reported cases. In response to this finding, the chief of epidemiology and surveillance for CDC’s Lyme disease program stressed that this tick-borne infection is a significant public health problem [1].

The issue spreads across international lines. The end of the 20th century and the beginning of the 21st century witnessed national and regional epidemics of tick-borne infections in Central and Eastern Europe, India, Turkey, Russia, and the US [2]. Worldwide, there is now mounting concern about the increasing prevalence of tick-borne illnesses. So what is causing the rise in incidence? Although some argue increased awareness or better diagnostic testing, a more insidious and widespread issue may be the answer.

It is well known that human activities have led to a rapid increase in greenhouse gases, including carbon dioxide, methane, and nitrous oxide. The release of these gases into the atmosphere has resulted in warming of the Earth’s surface. In the US, average daily temperatures since 1900 have risen by 0.4 degrees C. This change has largely occurred over the past 30 years [3]. Climate change is predicted not only to cause warmer temperatures, but to increase rainfall, droughts, wildfires, and natural disasters [4]. The resulting environmental transformation will alter the Earth’s complex ecosystems, affecting the life cycles of vectors and their hosts. An important potential consequence is the increased risk of disease transmission [3].

Since ticks spend 98% of their life cycle detached from their hosts, climate plays a large role in the dispersal of tick populations across the US [5]. The life cycle of a tick (an arachnid, not an insect) begins at the egg, then progresses to larva and nymph stages before the creature reaches adulthood. After hatching from the egg, a tick needs to consume blood at every stage to live [6]. For the life cycle to continue, a humidity of over 85% is critical. Temperatures over 7 degrees C (44.6 degrees F) are also necessary for tick questing, in which the tick climbs leaves or grass in order to latch onto a new host [7]. As well as providing an ideal environment for tick growth, a rise in temperature up to a certain limit can accelerate the developmental cycle, increase egg production, and increase tick population density [7]. Greater rainfall can also increase the amount of breeding sites for ticks [3]. In fact, regions with the highest average rainfall correlate with high tick populations [7]. A rise in tick populations will result in an expansion of their geographical distribution in North America, particularly at higher latitudes where there will be an increase in minimum temperatures. The increased number of ticks may also lead to increased tick-human interactions. Already, the close proximity of humans, tick vectors, and deer has increased the transmission of tick-borne pathogens.

Although data support a link between climate change and increased transmission of tick-borne diseases, there are numerous confounding variables. Socioeconomic factors, human migration and settlement, human behavior, changes in land cover, and population immunity all play a role in incidence of infection. Many of these variables are themselves affected by global warming, resulting in a convoluted pattern of interactions that make it difficult to identify the exact element responsible for increased disease transmission [8]. It is thus important to research the effect of weather and climate changes on the transmission cycles of these pathogens [9]. In the meantime, improved surveillance, increased awareness, and the use of insect repellant are key to protecting ourselves from becoming the next meal.

2. Institute of Medicine (US) Committee on Lyme Disease and Other Tick-Borne Diseases. Critical needs and gaps in understanding prevention, amelioration, and resolution of Lyme and other tick-borne diseases: the short-term and long-term outcomes. Workshop report. Washington, DC: The National Academies Press, 2011:219-263. http://books.nap.edu/openbook.php?record_id=13134 . Published 2011. Accessed August 20, 2013.