Vit-a-minute: Are Supplements Worth It? 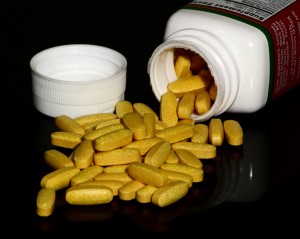 The Huffington Post recently publicized a large study on the health habits of doctors. The study, a survey done by Medscape with 31,399 participants, revealed that more than half of doctors take some form of dietary supplement. The most common form of supplement taken was a multivitamin [1]. With the way doctors find themselves in constant discussions about “evidence based medicine” these days, we can assume that there are solid data showing that multivitamins are beneficial to long-term health. Right? As it turns out, that issue has recently become a controversial one. So much so that it was written about in that bastion of zeitgeist: USA Today.

The article brings forth an argument between pro- and anti-vitamin groups. On one side is an editorial recently published by the Annals of Internal Medicine entitled “Enough is Enough: Stop Wasting Money on Vitamin and Mineral Supplements.” Standing on the other side of the issue is (unsurprisingly) a representative of the supplement industry, Dr. John Michael Gaziano, whose multiple large studies on the effects of multivitamins were largely ignored by the editorial [2]. While those on each side may or may not have their own less-than-scientific motivations for taking a stand, the question at hand is an interesting one. In the U.S., 28 billion dollars are spent on supplements per year [3]. Are we wasting our money?

The authors of the Annals of Internal Medicine editorial certainly think so. The article states that extensive literature review on the ability of supplements to prevent chronic disease indicates that not only is vitamin supplementation unhelpful, but the evidence for it’s lack of impact is so strong that further studies would be a waste of time and money [3]. The article makes this case by citing two studies by name. One study was a randomized controlled trial comparing outcomes (defined as total death, recurrent MI, stroke, coronary revascularization, or hospitalization for angina) between subjects given a daily multivitamin versus a placebo while recovering from an MI. This study found no difference between the two groups, but had a significant issue with non-adherence and withdrawal (17% of subjects withdrew) [4]. As a side-note, it is curious that the authors chose to cite this study of 1,700 subjects and a median of 31 months of follow-up instead of another similar randomized controlled trial (the Physicians Health Study II (PSH II) done by Dr. Graziano) with 14,641 subjects and a median of 11.2 years of follow-up that had the same negative conclusion [6].

The other article prominently cited by the editorial was another randomized controlled trial comparing the effect of multivitamins versus placebo on decline in cognitive function. This study also found no change between the two groups [7]. The editorial goes on to reference other studies in passing that show no benefit in supplementation of single vitamins such as Vitamins A, E, B and beta-carotene. The authors lament that despite these negative results, the use of multivitamins has continued to rise steadily since 1988.

Critics of this editorial make several points. One is that it only examines the role of multivitamins in terms of prevention or worsening of chronic diseases. Other potential benefits of multivitamin supplementation are not addressed. For instance, the benefits of folic acid supplementation in pregnant women are well known and have been studied extensively [8]. Another criticism is that the studies cited by the article only examine multivitamin supplementation in well-nourished populations: the subjects in the trial showing no benefit of multivitamins in the slowing of cognitive decline were all physicians [7]. But the main criticism of the editorial is that it overlooks data from prominent studies in this area of research. In particular, any mention of the paper by Fortmann et al. (also in the Annals of Internal Medicine, oddly enough) is conspicuously absent. This meta-analysis examined 103 articles on 26 separate studies that looked at the exact question that the editorial is trying to address: do vitamin supplements slow the development of chronic diseases? The conclusion that Fortmann et al. reach is slightly but importantly different. They mention two studies in particular that do show a benefit in multivitamin supplementation on the development cancer in men [5].

One study was an enormous randomized controlled trial that examined the role of a multivitamin versus placebo on cancer occurrence. This was another PSH II study, and had the same study subjects and follow-up period as the trial measuring cardiovascular outcomes mentioned above [6]. The trial reported a statistically significant decrease in cancer recurrence in the multivitamin group compared to the placebo [9]. A smaller French study (13,017 subjects with a median follow-up of 7.5 years) examined the same question in both men and women and found a similar result, but in men only [5]. While these studies seem to invalidate the editorial by themselves, there is also another PSH II study (not examined by Fortmann et al.) that demonstrated a positive effect of multivitamin supplementation. This one showed a decrease in the number of cataracts in the multivitamin group [10].

But before we (just the men, I suppose) run out and purchase a lifetime supply of Centrum Silver, a closer look at these studies is warranted. While the results were statistically significant, the clinical significance was modest at best. In the PSH II cancer study there was only an 8% decrease in cancer occurrence between the two groups – and only for non-prostate cancer – and there was no significant decrease in cancer or all-cause mortality [9]. The French study found a slightly more clinically significant difference, with an adjusted relative risk ratio of 0.69 (p=0.02), but in men only [5]. When the results from both trials were pooled and analyzed over a 10-year follow-up period, Fortmann et al. found only a 7% decrease in cancer risk in men taking a multivitamin [5]. The cataract study showed a 9% reduction in cataracts in the multivitamin group but no significant decrease in age-related macular degeneration [10]. It is also important to note that because the subjects in two of these studies were male physicians over the age of 50, and the other also only found statistical significance in males, their external validity is limited.

So what should we believe after examining the evidence put forth by the anti-vitamin editorial, its critics, and the Fortmann et al. meta-analysis? It seems to me that the data in support of multivitamin supplementation is limited and probably isn’t worth the $28 billion we spend on it in this country every year. But that doesn’t mean that vitamin supplementation doesn’t have a positive role to play in many situations. And it certainly doesn’t mean that future studies examining this question are a waste.

Aditya K. Sreenivasan is a student at NYU School of Medicine