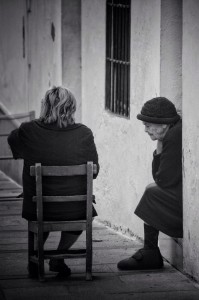 It was late when I left the call room on my last day as an intern in the step-down unit, and I hesitated before entering the stairwell. I considered turning instead towards the elevators, which would take me swiftly down seventeen floors, a world away from the sickness and disease we had spent the day battling. Instead, I took a detour to say good-bye to a patient I had met earlier in the month. I felt somewhat embarrassed and exposed as I left behind the silence of the stairwell, entering the bright, beeping world of the ICU. He was at the end of his battle with metastatic melanoma, and I wasn’t sure what I was going to say to him.

As soon as I slipped through the sliding glass doors of his room, where his wife greeted me warmly, I no longer doubted my decision. They seemed so grateful to see a familiar face and so surprised that I would take the time to come by, that I felt guilty for even considering bolting towards the elevators. We chatted about their young children and his upcoming birthday, a departure from the serious and sterile atmosphere surrounding us. Then, as I had grown accustomed to doing with all my patients over the previous few months, I asked my favorite question, “If you could give one piece of advice to a young doctor, what would it be?”

Over the past year I have gathered hundreds of responses, some comedic, many poetic, most extremely thoughtful. At that moment, I doubted that anything they could say would really surprise me. His wife gave my question some thought before responding,

“Show that you care. Patients are in such a vulnerable place, so that means a lot. We had one doctor that we saw for all of this, and when we walked out the door, we felt like he was never going to think about us again. Going through something like this, it’s really important to know that your doctors care.”

Still fatigued from a recent surgery, my patient simply echoed her thoughts,

“Show that you care.”

She paused for a second, quickly glancing at him before continuing,

“But I suppose it can be hard to care when you sometimes lose patients.”

As a preliminary intern, going into neurology, I hope to remember a lot of the medicine I learned this year, but realistically, I know that I will forget more than I retain. One attending recommended writing down everything we learn. I can’t imagine how many notebooks that would fill, and to be honest, I can’t imagine going back and reading them. Medicine changes daily. On the other hand, the lessons I learn from my patients will be relevant both today and in 50 years, for an intern in medicine and a seasoned neurologist. So instead of keeping track of all the medicine I’m learning, I’m keeping track of all the advice from my patients “for a young doctor.” What follows is but a small sample of what I have learned from my patients:

1. “You should listen. These days, with all the technology, a lot of doctors don’t listen to their patients.”

2. “Don’t even get involved in something like alcohol.” “Don’t get cirrhosis.”

3. “Pray. Pray hard. Because it’s hard. You gotta know all this stuff, and you gotta say it right.”

5. “Be gratified by God. Most people participate in taking lives. Even people with jobs, they’re working themselves to death, literally. You’re a lifesaver.”

6. “Stay single! When you marry young, it changes your lifestyle forever. You can’t make your own decisions. You have someone else making them for you. You know what’s more dangerous than alcohol and cocaine? Love. When you want to leave. They should put love on the shelf right next to liquor.”

7. “Let [patients] have a hamburger once in awhile!”

8. “Take every piece of advice with a filter.”

10. “Open your eyes more. Despite being a doctor, get on the joy living bandwagon. Get in and ride until the wheels fall off.”

13. “If you could get the jugular, you would get blood really quick.”

15. “Be positive. If you think negative, your treatment will be negative.”

16. “Don’t tell patients how long they have to live unless they ask.”

17. “Stay open. I used to think creativity was only in the arts, theater…But it’s everywhere. Even Wall Street. And remember that everyone can contribute.”

18. “Assume nothing. Ask a lot of questions. It’s the questions you don’t ask that will get you in trouble. Especially for neurology. It’s so nebulous.”

19. “The best thing, but the most dangerous thing, is to be passionate about something and follow your passion. Some things are hard. Theater is tough. Toy designing is almost impossible. Some fields like yours are full of opportunity. There is room for growth and intelligence. My one line of advice would be, ‘Love what you do.’”

I have never regretted getting to know a patient. Like my co-interns, I’m still learning the art of medicine. Unlike with physiology or pharmacology, there is no textbook to which to turn. We must carefully observe the behavior of our attendings and residents, learning from the good examples as much as the bad . Most of all however we learn from our patients. They teach us which forms of communication work and which fail. They can provide a never-ending education on life, culture, and humanity.

I have never regretted getting to know a patient. Like my co-interns, I’m still learning the art of medicine. Unlike with physiology or pharmacology, there is no textbook to which to turn. We must carefully observe the behavior of our attendings and residents, learning from the good examples as much as the bad . Most of all however we learn from our patients. They teach us which forms of communication work and which fail. They can provide a never-ending education on life, culture, and humanity.