Chimeras Could Bridge the Gap Between Treatment and Cure Or Are They Your Silent and Deadly Twin? 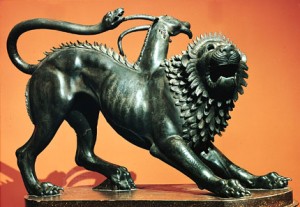 Mrs. CS is a 66-year-old Indian female who presents for a cardiology follow-up. The patient has a history of mitral regurgitation secondary to rheumatic fever she experienced as a child. As a teenager, her condition was diagnosed when she frequently became short of breath while playing sports in school. She was in good health until 24 years ago, when an acute episode of dyspnea while climbing stairs sent her to the emergency room. Her native mitral valve was found to be irreparable, and now a prosthetic valve that used to belong to a pig sits in its place in her human heart.

My encounter with Mrs. CS made me think about other patients who have both human and animal parts. How do these people feel about sharing DNA with another species? Or with another human? Several years ago, I read about a woman named Karen Keegan, who was born with two genetically distinct cell lines, each with a unique set of human DNA. Her blood consisted of one cell line while some of her tissues derived from the other cell line. One cell line matched that of her children while the other did not. Ms. Keegan and Mrs. CS are examples of chimeras who exist in the human race, whether created by natural or medical means [1].

Where did the term chimera come from? Don’t be surprised if this name sends you back in time to the days of Greek mythology. On the island of Lycia, the chimera was a bestial creature who terrorized civilians until Bellerophon the immortal descended from the sky and killed the beast with the help of his stallion, Pegasus. Numerous writers, including Homer and Hesiod, described the Chimera in their mythological works:

“Ekhidna bore the Khimaira, who snorted raging fire, a beast great and terrible, and strong and swift-footed. Her heads were three: one was that of a glare-eyed lion, one of a goat, and the third of a snake, a powerful dragon.” [2]

Scientists have taken this concept of the chimera to define an unusual genetic circumstance. A natural chimeric human is a person who is born with more than one DNA cell line, each of which is expressed in different tissues or organs. The fertilization of two zygotes, each by a different sperm, normally results in fraternal twins. However, if these two zygotes meld together at the pluripotent stage of embryogenesis where cells can differentiate into any cell type, one fetus is created harboring two genetically distinct cell lines – a dominant cell line and an alternative cell line, forming a chimera [3]. There are approximately 100 cases of chimerism recorded in medical literature, the first one reported in 1953 being Mrs. McK, who had more than one blood type: 61% O Group cells and 39% A Group cells. Mrs. McK had never received a transfusion, yet her blood composition was similar to a person with a large transfusion of O blood into an A recipient [1,4]. Sharing of DNA in a chimera usually goes unnoticed, as it does with fraternal twins who share some of each other’s unique DNA in >20% of dizygotic sets [5]. Similarly, following childbirth, mothers carry some fetal DNA through microchimerism, a dormant process that has the potential to trigger autoimmune disease [6].

When sex chromosomes of each cell line differ (ie, X and Y together) to produce a hermaphroditic fetus with reproductive infertility, or the secondary cell line is present in a proportion >25%, a person’s chimeric nature can interfere with transplant, transfusion, and biological disease progression [1]. In the case of Mrs. McK, she carried enough of her twin brother’s DNA to manifest blood antigens of two different people [4].

The weaker cell line of a chimera can also reject a blood product, a transplanted organ, or alter a person’s disease prospects. When Karen Keegan searched for a kidney donor in 2002 and none of her three sons matched her own DNA, a chimera hypothesis was considered. After samples of hair follicles, skin, and surgical tissue were compared, Ms. Keegan’s hidden cell line was discovered. While her dominant cell line was expressed in her blood, her new line contributed to all three of her sons [1].

In pregnancy, there is evidence that microchimerism introduces secondary DNA that is recognized by our immune system as foreign, as in the case of cancer and mutated DNA. In an effort to remove “foreign” genetic material, autoimmunity develops [6]. Autopsies of women who died from autoimmune disease and who gave birth to sons reveal male cells in female spleen, skin, and lymph node tissue. In a study comparing women with systemic sclerosis (SSc) with and without sons, mothers with male cells had an increasing HLA compatibility that predisposed them to system sclerosis [7]. These findings are being extrapolated to other autoimmune conditions such as Hashimoto’s thyroiditis [8].

Let us not forget Mrs. CS, who is also a chimera of sorts, with her porcine valve and human blood coursing through her veins. However, she is an artificial chimera. Artificial chimeras are created either by transplant, transfusion, or in vitro fertilization. They include: (1) chimeric animals made from multiple embryos (like the chimeric rhesus monkey in 2012), and (2) animals with human-specific organs, like the pig with human flowing blood created at the Mayo Clinic in 2004

Living chimeric embryos could be an important source of information compared to cultured embryonic stem cells, which contain only one cell line. Chimeric organisms can grow human tissue that can be used as models for human disease. Culturing human cells in a living animal would be more efficient than creating stem cells from a patient’s own tissues, because the cloning procedure of using oocyte nuclei is very demanding [11]. Yet people are concerned that medicine will take this theory too far [12]. Will we have chimeric mice conceive human babies, or monkeys with human brains and behavior? [11] What does this mean for animal rights? Are these animal-humans ethically protected from harm? [13]

Injecting a fully potent embryonic stem cell into an early embryo would produce the most homogeneity between animal and human cell lines and produce a true chimera. Older organisms have body plans that are already developed and are less likely to meld two sources of genetic information [14]. Given restrictions on chimeric projects, researchers should strictly reproduce human organs in more mature embryos, thereby avoiding the significant overlap of genetic material that concerns ethics committees. These experiments are the starting point to tracking disease and genetic mutation, so that human embryos can become a more effective option for tissue transplant and disease cure. Nevertheless, the danger that natural chimeras increase the risk of autoimmune disease still exists.

Chimeras thus pose a dilemma for the medical world: while they appear the face of the future for stem cell treatment, the rise of autoimmunity suggests that the number of natural chimeras “might have been greatly underestimated, because such people are usually discovered only by chance” [1]. If therapies using animal chimeras lead us to a cure for chronic disease, will these animals eventually develop autoimmunity as in their human counterparts? And will this affect the value of stem cell treatments? It is up to the medical world to weigh the use of chimeras as the road to cure.