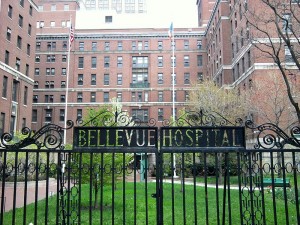 -How common are elevated cardiac enzymes during Wellens’ syndrome?

-Can the EKG changes in Wellens’ syndrome be found with other causes?

This post represents a follow-up to the 2009 article in Clinical Correlations by Dr. Erin Ducharme [1].

Wellens’ syndrome refers to a distinctive combination of clinical and EKG findings in unstable angina associated with high-grade lesions of the left anterior descending artery (LAD) [2]. Initially described in 1982, the criteria has undergone minor changes over 30 years to now include [2,3,4]:

-Inverted, symmetrical or positive-negative biphasic T-wave changes in the precordial leads (most noticeable in V2-V4)

The clinical importance of Wellens’ syndrome was established early with a reported incidence of 14.2% in unstable angina cases [3]. It has been known as a “pre-infarction” stage as the initial, pre-PCI study found that 75% of these patients went on to develop anterior myocardial infarctions (MIs) within a mean of 8.5 days if not revascularized [2].

A 52 year-old Polish woman presented to an outside hospital complaining of intermittent chest pain for 1 week. She had presented to an outpatient clinic 1-week prior after an episode of exertional left-sided chest pain. She was diagnosed with angina and prescribed aspirin and sub-lingual nitroglycerin (EKG unavailable). Throughout the subsequent week, her chest pain episodes worsened in both frequency (up to 10x/day) and quality. Chest pain was described as pressure-like sensation with radiation down her left arm associated with diaphoresis and nausea. She experienced a 10-minute episode at rest the night prior to admission that prompted her to present to the emergency room (ER).

Her medical history was only significant for active cigarette use (40 pack-year history). She had a family history significant for myocardial infarction and cerebrovascular accident in her mother (age 70s).

Her troponin levels were positive with a peak of 0.153 ng/ml (unclear time course). Other labs and chest x-ray were unremarkable. She was treated with aspirin, clopidogrel, metoprolol, and therapeutic enoxaparin for NSTEMI. She was then transferred to Bellevue for catheterization.

At transfer, troponin levels had downtrended to 0.086 ng/ml (36 hours after initial presentation). She was converted to intravenous heparin and started on rosuvastatin. Subsequent EKG performed while chest pain free and on ACS protocol showed new TW changes with inversions in I, aVL, and V1-V6 (most pronounced in V3 and V4) [Figure 2]. 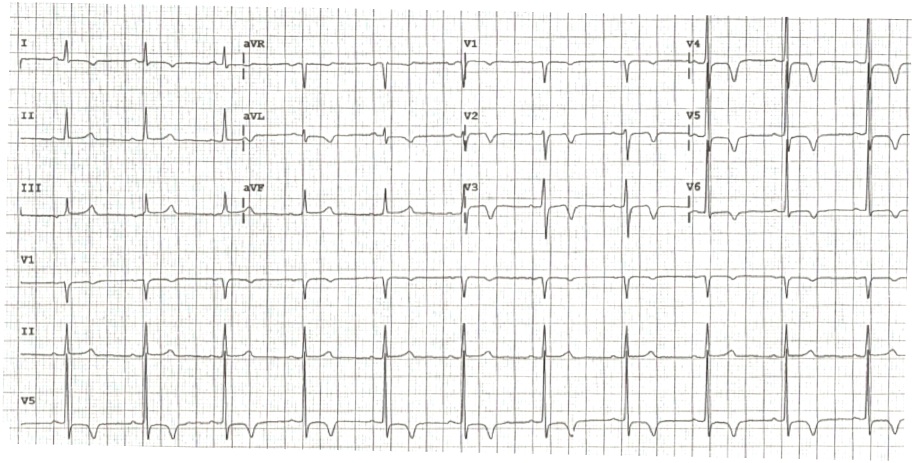 She remained asymptomatic and cardiac catheterization was performed showing a 95% proximal LAD lesion with 40-50% lesions in the left circumflex (LCx) and right coronary arteries (RCA). The LAD lesion was treated with two drug-eluting stents with excellent angiographic results. Post-catheterization EKG [Figure 3] showed persistent TWI in I, aVL, and slight biphasic TW in V2, V3 and TWI in V4-V6. She was discharged with plans for dual anti-platelet therapy for a minimum of 1 year and smoking cessation.

The frequent absence of clear ischemia at initial evaluation has made recognizing Wellens’ syndrome challenging. Our patient’s recent onset and progression of symptoms were consistent with early reports that nearly 70% of patients developed new-onset angina within 6 weeks of admission [2]. Her age fell within previously reported ranges, however a recent paper reported the youngest case of Wellens’ in a 24-year old female [3,5]. Given the increasing prevalence of atherosclerotic risk factors in younger populations, we can expect an earlier age of onset to become more common. Many patients, such as ours, may be chest-pain free as the time interval between last chest pain episode and admission was found to be a mean of 1.3 days [3].

Electrocardiographically, the initial EKG findings were subtle and progression of her TW changes during an asymptomatic period is not uncommon [6]. Only 50-60% of patients may have the characteristic T-wave changes on admission with an additional 30% of patients developing these findings within 24 hours [3]. EKG findings may be the sole clue to Wellens’ as only 11.6-21% of patients will have elevation in cardiac enzymes. Of the small percentage of patients with positive cardiac enzymes, none had elevations above twice the upper limit of normal [2,3]. The presence of positive enzymes is particularly worrisome as it has been associated with a higher incidence of total LAD occlusion and should prompt emergent catheterization evaluation [3]. Of note, the initial studies were limited as currently used cardiac biomarkers (troponin, CK-MB) were not yet available at the time of publication.

More recent studies describe EKG findings similar to Wellens’ syndrome in a number of different clinical contexts and suggest acute myocardial edema may mediate the characteristic changes. A recent case series reported 4 patients believed to have Wellens’ based on initial EKG. Further cardiac work-up revealed that none of these patients had a high-grade LAD stenosis and a different underlying cause was identified in each (myocardial bridge of the LAD, coronary dissection, cholecystitis, and takatsubo’s) [7, 8]. Follow-up with cardiac MRI revealed areas of acute myocardial edema. At 6 to 8 week follow-up, this edema had resolved coinciding with EKG normalization. The authors concluded that myocardial edema rather than left systolic dysfunction led to the EKG repolarization abnormalities although the exact mechanism remains unknown at this time.

Our patient’s clinical presentation and course represents a classic case of Wellens’ syndrome. Although case reports have begun to show that the EKG findings of Wellens’ can occur in the absence of LAD stenosis,suspicion for a critical LAD stenosis should remain high to ensure prompt evaluation and revascularization when indicated.