The answer to the mystery quiz is pleural effusions, specifically, bilateral subpulmonic effusions. The chest radiograph shows a number of findings: (1) the apparent diaphragm shadow is in fact fluid sandwiched between the undersurface of the lung and the actual diaphragm (Image 2a, arrow); (2) the density of this shadow is homogenously white (Image 2a, asterisk) and differs from a normal diaphragm which has a graded density (Image 2b, triangle) due to superimposed air that progressively decreases towards the bases (Image 3b); (3) the actual diaphragm (Image 2b, double arrows) begins its descent more medially than the descent of the subpulmonic effusion (Image 2a); and (4) the distance between the top of the gas bubble and the left hemidiaphragm is very small in the normal radiograph (Image 2b), compared with the increased distance due to the subpulmonic effusion (Image 2a). The chest CT confirms that the findings on the standard radiograph represent subpulmonic effusions (Image 4, asterisk). 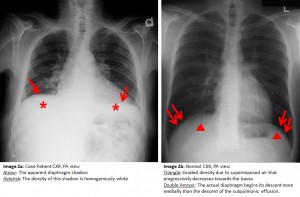 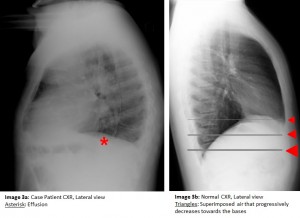 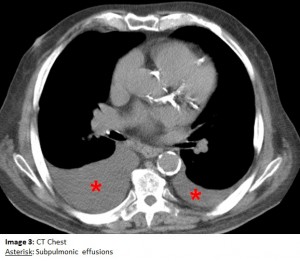