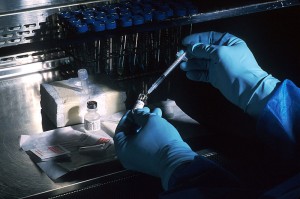 We are not winning the war against cancer, if war is even an appropriate metaphor. When Richard Nixon signed the National Cancer Act into effect in 1971, many predicted that cancer would be a thing of the past within 5 years. It was likened to polio, smallpox, and other long-since-forgotten scourges of mankind; with appropriate funding and research, surely cancer, too, would vanish. With that act in 1971, the National Cancer Institute received a budget of $200 million, a figure that has grown to nearly $4.8 billion today. Time and time again, glimmers of hope have emerged. Angiostatins made the front page of the New York Times in the late 1990s, but development was quickly halted by Big Pharma when it became clear that their effect was short-lived and their cost exorbitant. A similarly discouraging story can be told recently with many of the targeted drugs, epitomized by the emergence of resistance mutations in melanoma treated with BRAF inhibitors [1].

The story of cancer is not all grim. With the widespread adoption of early detection and screening programs, 5-year survival has increased by as much as 33% since 1971. The most transformative advance, gaining traction only in the last decade or two, is the redefinition of cancer from a disease of tissue tumors to one of molecular cell defects and deregulation (often inflammatory) of the surrounding “microenvironment.” This shifting paradigm has introduced a role for host immunity in cancer and drugs targeting tumor and non-tumor oncoantigens to perturb the microenvironment. Perhaps the most optimistic development to arise from this new cancer model is the idea of a cancer vaccine [2].

There are two types of vaccines for cancer: those that prevent it and those aimed at treating it once it occurs. Examples of the former include recombinant human papillomavirus vaccine [types 6, 11, 16, 18] (Gardasil; Merck and Co., Whitehouse Station, NJ) for the prevention of cervical cancer, and the hepatitis B vaccine to prevent hepatocellular carcinoma (HCC) [3]. These vaccines are similar to traditional antiviral vaccines in that they are raised against viral target antigens and prevent propagation of infection by bolstering the host immune clearance of the virus. However, they are unique in that, by curtailing the infection, they also prevent the viral-induced oncogenic transformation that often follows. Hepatitis C vaccines are currently in the pipeline [4] and may have similar effectiveness in the reduction of HCC incidence. Perhaps further in the future we may see a vaccine against Epstein-Barr virus [5] with reduction in its associated malignancies (nasopharyngeal carcinoma and Burkitt’s lymphoma). The efficacy of currently available preventive, viral-targeted vaccines is undeniable, exemplified by the adoption of routine vaccination of nearly all teenagers and young adults with the Gardasil vaccine.

At first, it may not be obvious how an entity as enigmatic as cancer can arise from commonplace infectious causes, when it is more often thought of as a non-communicable disease of genetics or aging. Inflammation, however, provides a mechanistic link between these cancers and those arising from somatic oncogene mutations. Chronic, low-grade inflammation and its associated cytokines and C-reactive protein–whether from infection, autoimmunity, or environmental causes–play a proven role in carcinogenesis [6]. An understanding of these pathways and the steps where we can intervene is essential to the development of targeted cancer therapeutics. Still, despite the extensive pathogenic overlap between virus-induced and de novo neoplasms, treatment vaccines (compared to preventive vaccines) have been mostly disappointing. In brief, tumor growth kinetics [7], tumor-derived immunosuppressive mechanisms [8], and genomic instability leading to resistance [9] play significant roles.

If we are to design better cancer treatment vaccines, we must understand why the host immune system is ineffective at clearing cancer in the first place. Ideally, the first cell to obtain a transforming mutation would immediately be detected by natural killer cells via recognition of surface ligands. Destruction and antigen uptake and processing by macrophages would follow, and eventually long-lived, tumor-specific B- and T-cells producing cancer-directed antibodies would be generated. Sound familiar? Replace the word “tumor” with “virus” and we are transported back to immunology courses and discussions of the cell-mediated response to infection. With such a robust defense mechanism in place, what provides the escape mechanism that allows cancer to be so much more devastating than, say, chicken pox? In a word: the microenvironment. Understanding this concept is crucial to developing hearty and efficacious vaccines. The microenvironment provides a niche for cancer cells by harboring them physically, supporting them with nutrition and blood flow [10], and providing an environment that promotes development of antigen-negative (read: resistant) tumor cells through selective pressure. These antigen-negative tumor cells are unaffected by single epitope monoclonal antibodies [9], be they host- or laboratory-derived. Thus, administration of mono-antigenic vaccines in the face of a competent microenvironment seems doomed to fail.

However, were it possible to administer the vaccine earlier in the course of the cancer, in the context of an immature microenvironment, there is potential that the antibody response could evolve alongside the cancer and its niche. Cancer biologists are hopeful that cross-presentation between antigen-presenting cells would generate propagation of the immune response that both persists after elimination of the original monoclonal antibody and generates a polyclonal response to multiple antigenic epitopes [11]. Theoretically, antigen-negative tumor escape would be attenuated and the effector T-cell response might generate immunological memory [12]. Ultimately, this proposed solution to the failure of treatment vaccines still relies on early detection, emphasizing further the role of screening for targetable cancers.

Even in the face of these obstacles, meaningful clinical responses have been observed with therapeutic cancer vaccines in clinical trials. Jean-Claude Bystryn, Ruth Oratz, and Richard Shapiro performed some of the pioneering studies on a polyvalent melanoma vaccine here at the New York University School of Medicine in the early 2000s. In the proof-of-concept study, significant populations of CD8+ T-cells were derived against one or both of two melanoma-associated antigens in 60% of a small cohort of patients. More importantly, those T-cell responders remained recurrence free for at least 12 months, compared to a 3-5 month range of recurrence in nonresponders [13]. In the subsequent randomized, controlled trial, patients with metastatic disease and particularly poor prognosis were randomized to melanoma vaccine or placebo groups with mean follow-up of 2.5 years. Kaplan-Meier analysis demonstrated a trend towards lengthened median time to disease progression and Cox proportional hazards found this trend to be statistically significant [14]. There was also a trend towards increased overall survival, though the study was not powered to detect this difference with statistical significance. Two additional randomized, controlled trials [15,16] would follow and find this difference in overall survival in vaccine-treated patients to be significant. From these studies and those that came later, it seems clear that vaccines are safe, have improved toxicity profiles compared to chemotherapeutic options, and have the potential to demonstrate clinical efficacy. More recently, studies of anti-HER-2/neu peptide vaccines for breast cancer, reviewed by Mandell this year, have demonstrated similarly promising results [17-21].

The drawbacks of cancer vaccine treatment are few and the serious side effects are thankfully rare and mostly theoretical. Commonly, induration, pain, swelling, lymphadenopathy, chills, and fever are observed. More infrequently, self-limited transfusion-like reactions can occur, which may progress to life-threatening systemic toxicity in atypical cases. Theoretical side effects include untoward enhancement of tumor growth and the development of autoimmunity to normal host cells and tissues. The former is due to induction of an activating immune response and has been observed in animal models and only a handful of human patients. However, it is unclear if this is due to the vaccine or to particularly aggressive behavior of the malignancy. Autoimmunity has occurred, presenting as vitiligo in melanoma patients treated with anti-melanocyte vaccines, with no systemic effects or autoimmunity to vital organs detected.

From napalm-esque chemotherapeutics to targeted biologics more closely resembling homing missiles and now vaccines acting as double agents to eradicate cancer, maybe war is a proper analogy. If so, we find ourselves at a draw at best, with cancer causing 1 in 8 deaths worldwide, over half a million deaths in the United States each year, and nearly $1 trillion in yearly economic losses from premature death and disability. Many strides have been made to push the understanding of cancer to the limit of our technological and intellectual abilities. Whether or not vaccines will be integral to the future of cancer treatment remains to be seen; however, their development is an illustration of the conceptual shift currently occurring within the field of cancer therapeutics.