The patient is a 46 year old female who presented to the emergency room with breathlessness, productive cough, subjective fever, and myalgia for one week. Her history was notable for mild persistent asthma treated with tiotropium, mometasone, formoterol, and albuterol as needed. The patient was homeless and lived in a shelter. She was poorly compliant with her medications. In the ER, the patient had a pulse rate of 102 bpm, was afebrile with normal blood pressure, and had diffuse wheezing on physical exam. The CXR from the ER visit is shown (image 1). The patient was discharged on azithromycin. Two days later, she returned to the ER, complaining of ongoing symptoms, productive cough with a small amount of blood streaking, and worsening myalgia. The temperature was 101.8F, pulse rate 115 bpm, with a blood pressure of 90mmHg systolic after 3.5L of intravenous fluids. The WBC was 22k with 32% bands. The CXR from this ER visit is shown (image 2). The patient was subsequently admitted to the MICU and started on prednisone, ceftriaxone and continued on azithromycin. On hospital day 4, the patient had normal blood pressure but remained febrile; antibiotics were switched to vancomycin and piperacillin-tazobactam. On hospital day 5, a CXR was obtained (image 3).

What is your leading diagnosis? 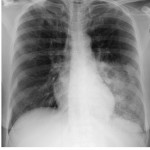 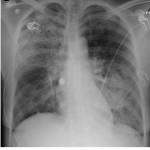