The Role of Fish Oil in Arrhythmia Prevention 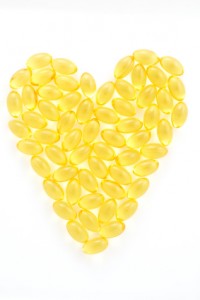 Omega-3 fatty acids were first identified as a potential agent to prevent and treat cardiovascular disease through several epidemiologic studies of the Greenlandic Inuit in the 1970s suggesting that high consumption of fish oil was associated with a decreased risk of cardiovascular disease [1,2]. Fish oil contains two omega-3 fatty acids, eicosapentaenoic acid (EPA) and docosahexaenoic acid (DHA), that have been shown to be beneficial in treating hypertriglyceridemia and in the secondary prevention of cardiac events [3-5].

The GISSI-Prevenzione trial, published in 1999, was one of the first multicenter, randomized controlled trials to explore the effect of supplementation with omega-3 fatty acids on patients with recent myocardial infarctions [5]. The trial included 11,324 patients with recent myocardial infarctions. They were randomized to receive daily supplementation with either a capsule containing EPA and DHA in a 1-to-2 ratio or a placebo capsule for 3.5 years, with death from any cause, non-fatal myocardial infarction, and stroke as the composite primary endpoint. The trial demonstrated that supplementation with omega-3 fatty acids resulted in a significant reduction in the primary endpoint, with a relative risk reduction of 10% compared to placebo. The results of this trial suggested that a reduction in sudden cardiac death could be responsible for the decrease in mortality, sparking investigation of the potential anti-arrhythmic properties of omega-3 fatty acids.

Omega-3 fatty acids have been shown to increase the threshold of depolarization of cardiac muscle required for action potential generation in animal models, resulting in a decrease in arrhythmias. A 1994 study using a canine model showed that infusion of a fish oil emulsion resulted in a significantly decreased incidence of ventricular fibrillation compared to a control infusion in response to exercise-induced ischemia [6]. Further studies in rat cardiomyocytes revealed that the mechanism responsible for the reduction in arrhythmias is inhibition of voltage-dependent sodium and L-type calcium channels [7-9]. By shifting the cell membrane potential to a more negative value, omega-3 fatty acids increase the threshold required to generate an action potential, preventing the initiation of arrhythmias.

A 2005 randomized controlled trial of 402 patients with implantable cardioverter-defibrillators, however, demonstrated a trend towards benefit in patients receiving supplementation with omega-3 fatty acids [12]. The primary endpoint selected for the trial was time to first episode of ventricular tachycardia, ventricular fibrillation, or death from any cause. Though the results did not show a significant reduction in the primary endpoint, patients who received omega-3 fatty acid supplementation showed a trend towards a prolonged time to the first episode of these arrhythmias or death from any cause, with a risk reduction of 28% and p-value of 0.057. Furthermore, the risk reduction was significant when probable episodes of ventricular tachycardia and ventricular fibrillation were included in the analysis, with a risk reduction of 31%.

With conflicting results from several trials, a systematic review was performed in 2008 of 12 randomized controlled trials to synthesize clinical data on the effects of fish oil on mortality and arrhythmia prevention [13]. The primary outcomes were defined as the arrhythmic end points of appropriate implantable cardioverter-defibrillator intervention and sudden cardiac death. The results of the meta-analysis showed that fish oil supplementation did not have a significant effect on arrhythmias and all-cause mortality. The review did demonstrate a significant reduction in deaths from cardiac causes consistent with previous studies, including the GISSI-Prevenzione trial.

The mixed results between these studies may reflect differences in the baseline characteristics of the cohorts of the three studies. The Mozaffarian study placed an age restriction on the cohort of the study, resulting in a mean age of 72.8 years, compared to 56 years for the Danish Diet, Cancer, and Health Study and 67.4 years for the Rotterdam Study. The risk of atrial fibrillation increases with age; thus, the reduction in risk of atrial fibrillation in response to omega-3 fatty acid supplementation may only be appreciable in elderly populations at highest risk [17-18]. The assessment of dietary intake of omega-3 fatty acids also differed between the studies depending on the method of information collection. The Rotterdam study, for example, obtained information via a questionnaire and follow-up interview with a dietician, while the Mozaffarian study employed only a questionnaire.

The 2012 OPERA trial was the first randomized controlled trial to assess the effect of omega-3 fatty acid supplementation on atrial fibrillation [19]. The OPERA trial randomized 1516 patients with a mean age of 64 years who were scheduled for cardiac surgery to receive either a daily fish oil capsule or placebo for 3-5 days before the surgery and for 10 postoperative days or until discharge, whichever came first. The results of the trial showed that perioperative supplementation with fish oil did not reduce the risk of postoperative atrial fibrillation compared to the placebo.

In conclusion, although omega-3 fatty acid supplementation has been shown to provide several potential cardiovascular benefits, trials have failed to consistently show that omega-3 fatty acids have significant anti-arrhythmic effects. The reasons for the inconsistent results are unknown, and perhaps may be related to patient selection, type of fish oil preparation, fish oil dose, or other factors. Meta-analyses of randomized controlled trials have not shown a reduction in either ventricular arrhythmias or atrial fibrillation. Additional studies are necessary to further characterize the role of fish oil in preventing arrhythmias.