There’s an App for That: Fitness Apps and Behavior Change Theory 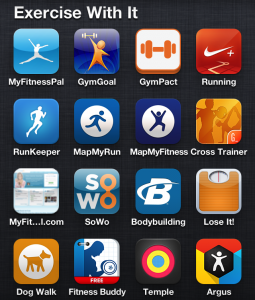 According to recent reports by the CDC, more than one-third (78.6 million) of American adults are obese. Approximately 17% (12.7 million) of children and adolescents ages 2-19 also meet criteria for obesity [1]. Obesity-related health conditions, including diabetes, heart disease, certain types of cancer, and stroke are among the leading causes of preventable death. Yet, obesity is not the sole contributor to these diseases. Other health risk behaviors, including smoking, alcohol abuse, and lack of physical activity all interact to produce poor outcomes.

Software developers have begun to take advantage of people’s obsession with technological advances to develop applications targeting health improvement. These apps exploit society’s move towards the “quantified self,” or the ability to self-monitor, self-sense, and self-track aspects of our daily lives [2]. They also make use of “gamification,” the concept of applying game mechanics and game design techniques, such as competition and reward systems, to engage and motivate people to achieve their goals [3]. Questions remain, however. How effective are these programs in actually changing behavior and do they make use of what we already know about behavior change? Let us review two of the more prevalent health behavior theories that have been successfully implemented for behavior change to determine what fitness apps already do well and what can be improved.

The health belief model, first developed in the 1950s by social psychologists Hochbaum, Rosenstock, and Kegels, is based on the understanding that a person will take a health-related action if that person a) feels that a negative health condition can be avoided b) has a positive expectation that by taking a recommended action, he/she will avoid a negative health condition and c) believes that he/she can successfully take a recommended health action. In this model, a person will weigh threats with net benefits, taking into account perceived susceptibility, severity, and barriers [4]. 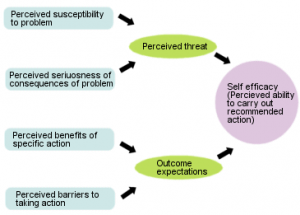 The transtheoretical model was developed by Prochaska and DiClemente in the late 1970s and has been used successfully in smoking cessation. It suggests that individuals move through several stages of change. The first stage, precontemplation, includes people who do not yet recognize that they need to change their behavior. During the contemplation stage, people start thinking about changing. In the preparation stage, people start taking small steps toward initiating their behavior change. During action, people have recently changed their behavior and plan to continue this change. In maintenance, people intend to maintain their behavior change. Finally, in termination, people have no desire to return to their unhealthy behaviors. It is important to keep in mind that the model also includes a stage known as relapse, in which people return to their old unhealthy behaviors, and this can occur at any point in the process [5]. 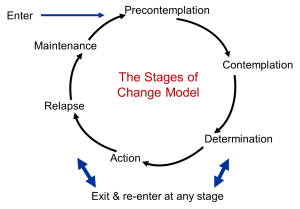 Adapting these behavior change models to fitness applications could prove very effective. Let’s take MyFitnessPal as an example. Upon downloading this app for the first time, users are immediately asked for their goal: lose weight, maintain weight, or gain weight. The app then asks for physical activity level, height, weight, and contact information. Immediately after these steps, users are told their maximum allowed calorie count per day and are asked to begin tracking their meals and activity. According to the transtheoretical model, for people in the precontemplation or contemplation stages this first five-minute encounter with the app can seem overwhelming and abrasive. Negative feelings about behavior change have been shown to deter people from engaging [6]. If the app instead first assessed a user’s readiness to change, it could then tailor goals to specific stages. Someone in the contemplation stage, for example, may benefit from easy-to-understand information regarding weight loss and its benefits on several organ systems. Another user in relapse may benefit from encouragement from members of his or her social network rather than constant app reminders to fulfill a certain daily calorie requirement.

According to the health belief model, behavior change is an individualized process, in which the patient’s self-efficacy is of upmost importance. MyFitnessPal may be successful in providing assessment and feedback to motivate change, as users are reminded of goals they set and are rewarded when they reach these goals. It is less effective, however, in providing individually tailored assistance or guidelines that are specific to a person’s unique risk factors for disease. If the initial profile assessment were to include factors that are included in the American Heart Association atherosclerotic cardiovascular disease (ASCVD) risk calculator, such as systolic blood pressure, HDL cholesterol, or smoking, recommendations could be made that are specific to an individual’s risk factors [7].

Taken together, it seems that, while fitness apps are promising in some respects, there is room for improvement to better align with the principles of behavior change theory. One study, conducted by Brunstein and colleagues in 2012, examined a multitude of different behavior change apps and found that they would benefit from giving tailored, personalized advice that is integrated into a treatment plan for a particular person [8]. Another study, conducted by West and colleagues in 2012, looked specifically at diet apps and found that most apps were theory-deficient and provided just general information or assistance [9].

There are newer wearable devices that automate the input process. These devices, such as FitBit or JawboneUp, systematically upload physical activity (number of steps) and sleep (hours slept and deep versus light sleep) onto a mobile device. This automaticity makes behavior tracking more convenient for the user. A 12-month prospective quasi-experimental single cohort study conducted by HITLAB and Boehringer Ingelheim assessed the impact of wearable devices in improving physical activity, sleep, body-mass index, and self-reported health in 565 healthy adult volunteers. In this study, every age group of participants increased physical activity, with the older population (50-67) demonstrating the greatest overall increase in the number of steps from baseline [10]. The convenience and ease of use of the wearable fitness trackers can successfully improve users’ self-efficacy.

One of the most promising future aspects of fitness applications is their use in the larger healthcare system. Programs such as HealthKit are being developed that will allow healthcare providers access to patients’ fitness app information [11]. This will enable physicians to make recommendations or adjustments to a treatment plan based on the patient’s unique progress. With apps that can measure heart rate, as well as apps soon to be developed that can detect blood pressure or even serious arrhythmias, doctors can also incorporate individualized physiological information to help patients set more realistic goals. Of course, the success of these larger-scale projects depends on the ability of the apps to change behavior successfully. An opportunity exists for software developers to partner with health behavior change experts to improve user experience and success. As the legendary Rosie the Riveter poster taught us, albeit for a very different cause, “We can do it!”