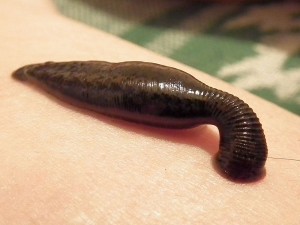 “Do you want to see something gross? Go into the soiled utility room and check out what’s in the jar.” Never one to pass on the opportunity to “see something gross,” I poked my head in and examined the tiny glass jar that sat on the counter. Living up to its billing, within the container sat about a half dozen leeches. Contrary to my assumption that any role these segmented worms had in the field of medicine went away with the abandonment of bloodletting, they had been used that day on a wound site in a plastic surgery patient.

Hirudotherapy, the utilization of leeches for medicinal purposes, has re-emerged over the last half century to play a significant role in the postoperative management of patients who have undergone various forms of microsurgery. Their use in microsurgical operations spans a range that includes free tissue flap transplants as well as the reattachment of digits, limbs, and other body parts [1]. The revival of hirudotherapy was spurred by the 1960 paper, “Venous congestion of flaps treated by application of leeches,” by Deganc and Zdravic in the British Journal of Plastic Surgery. It sought to address a major issue plaguing reconstructive microsurgery at the time: the “blue flap.” This term referred to the ominous discoloration seen in a flap that had become cyanotic, most often from venous congestion in tissue that was not yet adequately vascularized [2].

To improve blood flow, the pair introduced Hirudo medicinalis, a species of leech native to Europe. In a series of 20 cases of venous congestion, Deganc and Zdravic allowed leeches to bite and attach to patients’ skin and then suck blood from the tissue until they detached of their own volition. A 70% success rate for complete restoration of blood flow was observed, while the other 30% of patients in the cohort experienced at least partial decongestion. Deganc and Zdravic proposed a dual mechanism by which H medicinalis was able to achieve such results. The first was the simple act of the leeches sucking out blood from the tissue, removing a volume that was noted to be about 5-10 mL per leech. The second involved the secretion of a number of biologically active substances in the saliva of H medicinalis, including hirudin, an inhibitor of thrombin with both antithrombotic and thrombolytic properties more potent than any other known natural substance [3]. As a consequence of this second action, Deganc and Zdravic often observed their patients continuing to bleed from a bite site for about 24 -72 hours after a leech had detached, resulting in the removal of 20-50 mL of blood [2].

In the 55 years since Deganc and Zdravic published their findings, hirudotherapy for the treatment of venous congestion in microvascular free flaps and revascularization of tissue has become increasingly accepted. In the summer of 2004 the FDA deemed leeches to be an approved medical device. Many of the fundamental principles remain the same, although hirudotherapy has undergone standardization and contemporary modification as it has become more widely utilized. Hirudotherapy is usually employed until revascularization of a transplanted flap or reattached tissue can occur, a period that typically lasts 2-6 days. Surgical sites are continuously examined and the hematologic status of patients receiving hirudotherapy is stringently monitored, with complete blood counts, partial thromboplastin times, and serum chemistries being checked every 4 hours. Patients also receive prophylactic antibiotic therapy against Aeromonas, a genus of bacteria with a known symbiotic relationship with leeches [1].

The efficacy of hirudotherapy has remained largely unchanged over the past several decades, as numerous studies have reported rates of tissue salvage ranging between 70-80%, with others describing success in greater than 90% of cases. Additionally, it has proven remarkably safe, with serious side effects such as vasovagal syncope or thrombotic microangiopathy observed only rarely and in patients with an underlying predisposition to such outcomes. The most common adverse effects experienced by patients include itching at the site of leech bites, regional lymphadenitis, and emotional distress at the idea of having leeches attached to their bodies. Excess blood loss nonetheless remains a concern, given the inherent nature of this practice, but can generally be managed by following the guidelines above and by transfusing packed red blood cells if hemoglobin levels dip below 8.0 g/dL [1]. The success of hirudotherapy in relieving venous congestion depends on the severity of congestion and the status of the revascularizing tissue at the time therapy is initiated. Nonetheless, it is apparent that leeches can safely provide substantial benefit to patients, regardless of how “gross” many may find the means by which it is achieved.

The practice of medicine is, above all, pragmatic. As Jonathan Bekisz mentions in this excellent review, patients are understandably leery about the notion of having bloodsucking annelids released into a wound and essentially being told, “Latch on and have fun with it.” But we are willing to give treatments that are revolting (fecal transplant for C difficile), gothic (electroconvulsive therapy for depression), or disfiguring (amputation), as long as the patient is better for it in the long run.