Don’t Tie Me Down! Do Neckties Spread Infection? 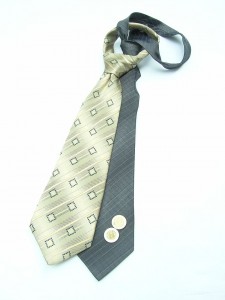 For over a century, neckties have been a staple accessory in the wardrobe of the American professional man. Although white-collar dress codes have trended toward a more casual style, the quintessential physician still wears the white coat, a stethoscope draped around the neck, and, if male, a necktie. This is understandable. No one would accuse a profession using an oath that originally swore “by Apollo the Physician and by Aesculapius [1]” to be one that easily strays from tradition. However, at a time when pathogens are rendering the antimicrobial arsenal increasingly ineffective, evidence supporting practices that may reduce nosocomial infections could change hospital policy quickly. Some efforts have already been implemented, like the hand-sanitizer dispensers placed throughout the wards. While these may help ensure that a clinician’s hands will be cleaned before and after every patient examination, the personal medical tools and clothing of the physician must also be seen as potential fomites. The stethoscope and white coat often come into contact with surfaces or patients, but the stethoscope can easily be cleaned with an alcohol wipe, and the white coat can be exchanged at a hospital laundry facility. Ties, however, “have been shown to be contaminated by pathogens…they are rarely laundered and play no part in patient care [2]” according to the United Kingdom Department of Health.

As medical policy is primarily driven by evidence, studies have recently been performed to determine if neckties are dangerous fomites. McGovern and colleagues published a study in 2010 that examined whether ties could be colonized by significant pathogens [3]. The authors cultured the ties of 95 British physicians, including interns, residents, and attendings. Seventeen of the 95 cultures grew potential pathogens, of which 10 grew Staph aureus (8 cultures were methicillin-resistant) and 10 grew gram-negative rods. Three cultures of ties grew isolates of both. Also of note, 55% of the participants reported that their ties had never been cleaned. The significance of these results is that ties worn by physicians can carry potentially harmful pathogens.

To explore whether transmission of bacteria from tie to patient is possible, Weber and colleagues published a small study in 2012 in which a physician simulated examining patients wearing different combinations of clothing inoculated with Micrococcus luteus [4]. The two conditions studied were: 1) a shirt and unsecured tie with the distal 6 centimeters swabbed with fluid from a bacterial suspension, and 2) a shirt (but no tie) that was inoculated with bacteria at the area just above the belt where the distal portion of a tie would be. The physician examined a mannequin 10 times with each form of dress.  Six of 10 mannequins that were examined while a tie was worn were found by culture to be contaminated, as compared to 1 out of 10 without a tie (p=0.036). There had been no growth of cultures of the mannequins before the encounter with the physician. These results support the contention that it is possible for bacteria to be transmitted from a physician’s tie to a patient.

A common justification for a necktie in the medical wardrobe is that it instills confidence in patients. As stated before, in the UK Department of Health guidelines, ties themselves provide no objective clinical utility in patient care or in protection of the physician. Unlike the stethoscope, penlight, or reflex hammer, they are useless for eliciting clinical findings in a patient. They are solely an accessory, with no practical use. In fact, a tie provides a convenient garrote around the neck of physician for the particularly disturbed patient.

There is a paucity of data in the United States regarding patient preferences as to whether or not physicians should wear a tie. In 2008, Hathorn and colleagues published a survey of 100 outpatients in an otolaryngology setting on preferred physician appearance [5]. Eighty-eight percent of patients indicated that the general appearance of a physician was important to them, but only 24% preferred ties to be worn. “Many commented that they preferred the more informal, relaxed atmosphere created, as long as the doctor still appears professional [5].” Despite the limitation of this survey to a small number of outpatients, the results suggest that perhaps the necktie is not essential to the professional appearance of the male physician in the 21st century, as long as he is otherwise appropriately dressed.

The cited studies provide insufficient data to conclusively direct medical policy, but they do implicate the necktie as a likely fomite and as a fashion accessory that is not critical to patient perception of the physician. The decision for medical directors to make, pending conclusive data, can be reduced to this: does the risk of transmission of dangerous bacteria by a physician’s tie outweigh the benefit of increased patient confidence by his wearing a tie? Based on their policy of prohibiting ties, the UK Department of Health indicates this is so. Perhaps hospitals in the United States should consider a change in dress code as well.

Bring Back the Bowtie

The UK Department of Health guidance states: “Although there is no conclusive evidence that uniforms and workwear play a direct role in spreading infection, the clothes that staff wear should facilitate good practice and minimise any risk to patients [2].” The small but plausible risk of MRSA transmission via the long end of, say, a Donald J. Trump Vector Collection necktie may bring about a recrudescence of the endangered bowtie.

The bowtie among male NYU residents is like the knuckleball among Major League Baseball pitchers: there are never more than two practitioners, but it never seems to totally die out.

Whenever one retires (Tim Wakefield) or graduates from the program (David Levine), another one comes along to take his place. And so the fragile tradition lives on.