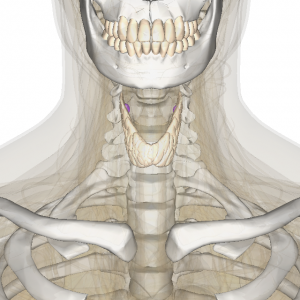 A 48-year-old depressed male smoker with a bit of an alcohol problem presents to the emergency department with worsening fatigue, severe lower back pain, constipation, abdominal pain, and 4 days of coffee ground emesis.

This could be anything. Viral gastroenteritis? Perhaps. Food poisoning? Probably not. Upper GI bleed? Likely, given his alcohol use. You send off routine labs, and then are called for a critical value: his calcium is 13.8 mg/dL. The albumin is normal. Next, you check the parathyroid hormone (PTH) level and it comes back low at 7 pg/mL (normal = 11-54 pg/mL).

Calcium enters the body through dietary intake. Forty percent is absorbed in the small intestine via the brush border membrane, and the remainder is excreted in stool. Vitamin D acts directly on the intestinal epithelial cells to bind calcium, facilitating its absorption [1]. In low calcium states, PTH is released from the parathyroid glands via exocytosis. It then acts directly on bone, binding to the osteoblast PTH-1 receptor to oppose the inhibition of the β-catenin/Wnt signaling pathway, thereby stimulating osteoclast proliferation. Simultaneously, PTH acts directly on the kidney to increase renal calcium reabsorption by facilitating the conversion of vitamin D to its most active form [2]. PTH demonstrates both an anabolic and catabolic effect on the bone depending on its method of administration; continuous infusion of PTH results in severe hypercalcemia and a net decrease in bone volume, whereas daily intermittent PTH treatment increases bone formation [3]. This mechanism is incompletely understood, but research has implicated the role of Wnt signaling protein WNT-4 in the differentiation of osteoprogenitor cells [3].

The most common outpatient etiology of hypercalcemia is primary hyperparathyroidism due to a parathyroid adenoma [4]. If the adenoma is single and large enough, it may be detected on a Sestamibi scan and treated by surgical resection.

With a suppressed PTH of 7, this patient clearly does not have primary or secondary hyperparathyroidism. Our thoughts turn to other causes of hypercalcemia. Does he take diuretics? No. Any history of thyroid problems or symptoms of thyrotoxicosis? Nope. Has he recently experienced prolonged immobilization, perhaps following an orthopedic surgery? Negative. Did he overdose on milk products, antacids, or take high doses of vitamins A or D? Not that he can recall. History of tuberculosis or other granulomatous disease? No. Weird family history of high calcium levels in the blood? He has no idea.

At this point, hypercalcemia of malignancy must be considered. This is most commonly caused by tumor production of parathyroid hormone related peptide, or PTHrP. Although typically produced by squamous cell cancers (including lung, head, neck, breast, bladder, and ovarian malignancies), it can also be seen with lymphomas and even in patients with T-cell leukemia [6].

PTHrP is actually a normal gene product expressed in many primitive neuroendocrine tissues and the placenta. Its major physiologic role occurs at the growth plate, where it regulates endochondral bone development; it also mediates the epithelial-mesenchymal reaction during mammary gland formation [7]. While useful in developing fetuses and children, the physiologic role of PTHrP in the non-pregnant adult is not clear. Accordingly, elevated serum PTHrP in an adult is abnormal and concerning. In recent years, research has elucidated PTHrP’s role in development and disease states such as osteoporosis and osteoarthritis [7].

The PTHrP molecule itself has significant homology with PTH, even binding to the same PTH-1 receptor in osteoblasts [8]. It also activates the same pathways of bone resorption, distal tubular calcium resorption, and inhibition of proximal tubule phosphate transport as PTH [9]. But clearly PTHrP and PTH are not entirely alike in their functions. In particular, PTHrP fails to stimulate enzymatic renal conversion of vitamin D to its most active metabolite, and therefore does not increase intestinal calcium absorption [10]. Further, it is rare for cancer cells to ectopically produce endogenous PTH.

It is unknown why some cancer cells produce ectopic PTHrP. However, it appears that proliferating cancer cells capitalize on the same mechanisms that occur at the developing growth plate, using the normally dormant developmental Hedgehog pathway to enhance expression of PTHrP [11]. This, in turn, induces RANKL expression and subsequent bone resorption and forms a focus for bony metastasis, releasing TGF-β in the process. This becomes a vicious cycle, as TGF-β itself stimulates further production and release of PTHrP from tumor cells [12]. In this sense, PTHrP drives the development of bony metastases, and the breakdown of bone mediates further release of PTHrP. Notably, PTHrP can also stimulate metastases independently of the Hedgehog pathway, using the transcription factor Gli2 [13].

Therefore, PTHrP excess often results in more significant hypercalcemia than hyperparathyroidism given that it causes an uncoupling of bone resorption and formation. Thus, patients with elevated PTHrP tend to have severe hypercalcemia, often greater than 12 mg/dL. Patients with PTHrP-mediated hypercalcemia also typically have suppressed PTH levels, and the patient above is no exception. This is because serum calcium is high from an autonomous source, so it negatively feeds back on the normal parathyroid glands to decrease production of endogenous PTH [6].

Since PTHrP appears to play a role in normal osteoblast function, it may be possible to capitalize on this molecule in other disease models. Although PTHrP causes disproportionate bone loss in metastatic bone disease, PTHrP analogues are currently being developed as potential anabolic agents in the treatment of osteoporosis [14]. Most presently available treatments for osteoporosis are geared towards preventing bone resorption. Currently, the only treatment that induces bone formation is teriparatide (or rhPTH 1-34), though other drugs are being studied that also utilize the WNT pathway in osteoblasts. The theory behind this potential use is that, like rhPTH, intermittent administration of PTHrP might encourage osteoblastogenesis and promote osteoblast survival [15].

Not surprisingly, treatment of PTHrP-induced hypercalcemia involves treating the underlying source of the PTHrP production with surgery or chemotherapy. Used as a biomarker, a PTHrP level can measure response to anti-neoplastic treatment. There is currently no available agent that targets PTHrP specifically, although non-calcemic vitamin D analogs such as 22-oxacalcitriol have been studied and appear to reduce PTHrP release in animal models in vitro [16].

The patient described above underwent upper endoscopy, which revealed multiple gastric and duodenal ulcers. Pathology from this procedure was negative for Helicobacter pylori and malignancy. He underwent a spine X-Ray to evaluate his lower back pain, which was negative for lytic bone lesions and showed mild degenerative joint disease. Finally, he had a CT chest, abdomen, and pelvis, which revealed a 3-cm nodule in the right upper lobe. Biopsy confirmed non-small cell lung cancer, squamous type. Two weeks later, his serum PTHrP came back elevated (47 pmol/L; normal <6). His scans revealed localized disease, and the patient had surgery to remove the tumor and then was treated with chemotherapy.

This case demonstrates the importance of ruling out malignancy in patients with hypercalcemia and suppressed PTH. It is crucial to understand the subtle, but important differences between PTH and PTHrP, as they have tremendous implications for diagnosis, treatment, and patient outcomes.