Oxygen-Induced Hypercapnia in COPD: What is the Mechanism? 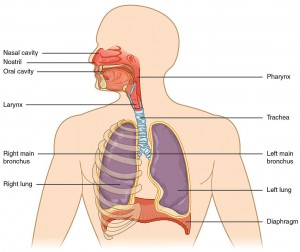 It was my first week on the wards as a third-year medical student, and I found myself huddled with the team in a busy corner of the Bellevue ED, listening to a man cough and wheeze his way through an interview. He was an elderly patient with an extensive smoking history–a lifetime of a destructive habit that had dilated and distorted his lungs beyond repair. He told us, between bouts of breathlessness, of worsening dyspnea and copious sputum production over the past couple of days, riding into his diseased alveoli on the viral coattails of a recent upper respiratory infection. Armed with a presumptive diagnosis of acute chronic obstructive pulmonary disease (COPD) exacerbation, we proceeded to manage his symptoms in full force, dilating his bronchioles and suppressing his inflammation. However, when it came time to administer supplemental oxygen, to give this man some much-needed breaths of air…we held back. I can distinctly remember my resident saying: “Make sure to titrate his oxygen to a sat between 88 and 92 percent.” At that moment, my resident was of course concerned about hyperoxic hypercarbia, a phenomenon that all of us are taught about in medical school, in which increasing oxygen saturation in a chronic carbon dioxide retainer can inadvertently lead to respiratory acidosis and death.1

But where do these magic numbers 88 and 92 really come from? What is the evidence against high-flow oxygen therapy in these patients? In one randomized comparison trial based in Australia, over 400 patients with probable acute COPD exacerbation were treated by paramedics with either oxygen titrated to a saturation between 88-92% or high-flow oxygen therapy, all while en route to the hospital. The authors found that all-cause pre-hospital or hospital mortality was significantly less in those patients who had received oxygen by conservative titration, with a relative risk reduction of 58%; these patients were also less likely to develop subsequent respiratory acidosis.2 Based on this study, there appears to be strong prospective mortality evidence in favor of withholding high-flow oxygen from COPD patients.

Why does the phenomenon of hyperoxic hypercarbia occur in the first place? Is there any evidence to back up the traditional “hypoxic drive theory”–a theory that is still taught in some medical school classrooms (as well as certain shelf examination preparation materials that shan’t be named)? Or has this historical explanation been debunked in favor of some other underlying mechanism? The earliest studies that warned against uncontrolled oxygen therapy in COPD date back to the 1940s; one investigator at the time theorized that hypoxia provided a vital “stimulus” to breathe in these patients, at the level of the sinoaortic nerves.3 And so, the theory of hypoxic drive was born. It postulates that chronic retainers bear a blunted response to carbon dioxide levels (and to their proxy, low serum pH), and that these patients therefore rely to some degree on hypoxemia in order to breathe.

Over the following years, the hypoxic drive theory gained traction within the medical community. It was not until the early 1980s that it was seriously called into question, at least within the scientific literature. In one prospective study at the time, COPD patients with acute respiratory symptoms each received 100% oxygen supplementation, which was found to decrease their minute ventilation by an average of nearly 20% (via a decrease in both tidal volume and respiratory rate). Surprisingly, this initial decrease in minute ventilation almost entirely reversed on its own within the next several minutes, even as these patients remained on 100% oxygen. The authors noted that despite this near-complete restoration of minute ventilation, arterial carbon dioxide tensions still remained significantly elevated compared to control, an observation that could not be explained by decreased minute ventilation alone.4 They hypothesized that the primary explanation for hypercarbia in the setting of oxygen supplementation was not alteration in minute ventilation, as had previously been thought, but rather, ventilation-perfusion (V/Q) mismatch. They reasoned that these patients were experiencing a loss of hypoxic pulmonary vasoconstriction, the physiologic process that in healthy people accompanies alveolar hypoxia and serves to redirect blood flow away from under-ventilated lung in order to optimize the V/Q ratio.  This normal physiologic compensation, when overcome with excessive O2 administration, results in worsening V/Q ratios, that is to say, more areas in the lung where V/Q ratios are low and more areas of high V/Q.  The extreme high V/Q areas that have no flow (no Q) represent dead space. In a situation where total minute ventilation remains constant, an increase in dead space diminishes CO2 excretion and results in higher PaCO2 values.

Almost two decades later, another study was published in which pulmonary vasculature modeling software was used to reinforce that same conclusion, namely, that increased oxygen levels contribute to hypercarbia chiefly by inhibiting hypoxic vasoconstriction and increasing alveolar dead space, and only secondarily by diminishing minute ventilation.5

Another mechanism that likely contributes to oxygen-induced hypercapnia in COPD is the well-studied Haldane effect, which was first proposed in 1914.6 The Haldane effect revolves around the hemoglobin-carbon dioxide dissociation curve, which shifts to the right with increased levels of oxygen, thereby increasing arterial carbon dioxide tension in the blood. This increase in PaCO2 is due to the fact that oxygenated hemoglobin binds to carbon dioxide relatively poorly compared to deoxygenated hemoglobin, and thus deposits more carbon dioxide in the bloodstream. By virtue of their tachypnea, patients with acute COPD exacerbation are not able to compensate and excrete this excess carbon dioxide through their lungs as effectively as they otherwise would in the absence of respiratory distress. Indeed, in the aforementioned study by Aubier and colleagues, the authors estimated that fully one quarter of the effect of oxygen on hypercarbia could be attributed to the Haldane effect alone.4

Regardless of the underlying mechanism (or most likely, mechanisms)… primum non nocere! Oxygen should never be withheld from a patient in situations of doubt–that much is certain. However, it is also important to recognize the prospective evidence against high flow oxygen in acute COPD exacerbation. And so, as I look back on my first week on the wards, huddled in the Bellevue ED next to the man with the broken lungs, I can proudly say that my resident did good. By holding back, and not over-zealously treating, he proved that he was up to date on the latest evidence regarding oxygen supplementation in COPD, and he may very well have spared this man a complicated and extended hospital course.

2 comments on “Oxygen-Induced Hypercapnia in COPD: What is the Mechanism?”