Why Does Our Hair Turn Gray? 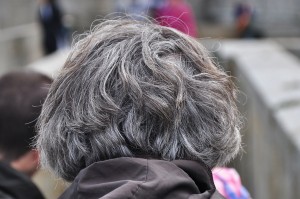 All but a lucky few of us will one day see our locks lose their color. But what is the physiologic basis for this unsightly transformation, known scientifically as canities? Why does our hair turn gray?

Epidermal and follicular melanocytes display some significant differences. Compared with their epidermal brethren, follicular melanocytes are larger, more dendritic, have more extensive Golgi and rough endoplasmic reticulum, and produce larger melanosomes [2, 3]. They also have a much higher capacity for melanin production. As few as 100 follicular melanocytes can intensely pigment a hair fiber up to 1.5m in length [4]. The remarkable melanogenetic potential of follicular melanocytes may have an evolutionary basis. Melanin is an avid binder of toxins and metals, and long, pigmented hairs may act as a sink for sequestering potentially noxious materials and limiting their access to the highly vascularized scalp [1]. Finally, unlike in the skin, where melanin is degraded as it is transported to the upper layers of the epidermis, melanin in hair remains relatively undigested (hence the consistent color of a hair fiber from root to tip).

Significantly, the life cycles of follicular melanocytes are inextricably bound to the hair growth cycle [1]. Hair follicles rotate through three stages of existence: anagen (growth phase), catagen (transitional phase), and telogen (resting phase). This sequence of phases causes human hair to repeatedly grow and shed. The hair growth cycle is driven by the proliferation and differentiation of epithelial stem cells residing in the bulge area [5]. It is in these bulge areas  that contain epithelial stems cells which store melanocyte stem cells which are responsible for hair pigmentation [6].

In contrast to epidermal melanocytes, which are free to continuously produce melanin, follicular melanocytes only produce pigment when their resident hair follicles are in their anagen phase [1]. During the anagen phase, these differentiated melanocyte stem cells located in the hair bulb produce and transfer pigment to adjacent epithelial cells that differentiate into hair [6]. However, as the hair enters the telogen phase, the differentiated melanocytes are no longer present as they undergo apoptosis that occurs with the degeneration of the lower part of the hair follicle [7]. The active period of melanogenesis, corresponding to anagen, can range from one month in an eyebrow hair to ten years in a scalp hair [8].

An enduring mystery of hair follicle biology is what causes melanocytes to disappear. The current belief is that, much like elsewhere in the body, the accumulation of free radicals eventually causes irreversible damage to melanocytes [4]. Ultimately, the cells die secondary to oxidative stress. Recent research supports this theory: a 2006 study from Berlin found that the “common” deletion in mitochondrial DNA (a marker of oxidative stress) occurred more frequently in graying hair follicles than in normally pigmented hair follicles [10]. Another study found that gray hair follicles accumulate hydrogen peroxide, a highly oxidative molecule, in millimolar concentrations [11]. Because melanogenesis is a highly toxic biochemical process, and follicular melanocytes contain such large stores of melanin, it makes sense that follicular melanocytes would be prone to oxidative damage [1]. This oxidative damage theory was further strengthened by a pilot case-controlled study conducted in an Indian population with premature canities. The investigators demonstrated that patients with premature canities had a higher level of pro-oxidants and lower levels of antioxidants in their sera compared to controls [12].

The rate of melanocyte loss can vary. There can be remarkable heterogeneity between different sites on one person’s body and even between different compartments of the same site (hence an individual’s temples becoming gray before their crown, or their scalp becoming gray before their beard). This heterogeneity may reflect differences in intrinsic “melanogenetic clocks” of individual melanocytes [4]. Genetics also play a role. Canities appears to be inherited through an autosomal dominant pattern, although inheritance is likely polygenetic [7].

But why gray? Why doesn’t our hair turn white, or for that matter, blonde or red or brown? Variations in hair color are due to mutations in the melanocortin-1 receptor (MC1R) gene [13]. Regardless of the original color of a hair fiber, when a follicle loses its melanocytes, it turns white. What we perceive as gray is usually an admixture of fully white and fully pigmented hairs [4]. Moreover, the loss of follicular melanocytes affects more than just the color of hair. Melanocytes interact biochemically with the keratinocytes that produce hair fibers. When melanocytes die, the composition of a hair changes. Graying hair is coarser, wirier, and more unmanageable than its pigmented equivalent. Changes to physical characteristics such as geometry and curvature affect shine and luster, which in turn affect how we perceive the appearance of hair. Gray hair is due to more than just the absence of melanin [4].

Currently we can treat gray hair cosmetically by dying it, but we cannot prevent hair from turning gray. Yet promising treatments are on the horizon. We now know that melanogenically active melanocytes are relegated to the hair bulb, at the base of the hair follicle [1]. Higher up on the hair shaft lies a reservoir of immature, inactive melanocytes, and evidence suggests that these immature cells can repopulate the hair bulb and become active when exposed to certain stimuli such as radiotherapy [1]. The activation of these immature melanocytes also appears to be regulated by a number of molecular signals, principal among them the Wnt  signaling pathway. The importance of this pathway has been exemplified by studies showing that mice deficient in Wnt expression exhibit a loss of melanocyte formation from the neural crest [14]. Theoretically, immature melanocytes could be used either to repigment a gray hair or to prevent a hair from turning gray in the first place.

Before we subvert nature, however, we should keep in mind that a phenomenon as universal as canities often has an evolutionary significance. As mentioned earlier, melanogenesis is a rather toxic process. Toxic processes tend to result in cellular mutations, cellular transformations, and ultimately, cancer. Could the death of follicular melanocytes prevent them from transforming into melanoma cells? Maybe there is a reason why our hair turns gray after all.

Dr. Aaron Smith is a former NYU medical student and current radiology resident at University of California at San Diego

One comment on “Why Does Our Hair Turn Gray?”