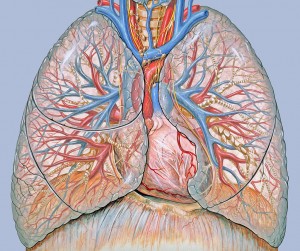 The American College of Physicians (ACP) recommends supplemental long-term oxygen therapy (LTOT) in all patients who have severe resting hypoxemia, defined as a PaO2 ≤55 mmHg or an SpO2 ≤88%. In patients with cor pulmonale or polycythemia they recommend initiation of oxygen therapy at a PaO2 ≤59 mmHg.1 Absent from the ACP recommendation is a target range to which saturation should be restored. The accepted standard of practice is restoration to a range of 88%-92%, and there are British guidelines that make recommendations regarding this range.2 Although no trial has ever been run to specifically identify a target range, an a priori understanding of the physiology of hyperoxic hypercapnea, as well as data from other studies, guide our current practice.

There are seven randomized clinical trials that currently inform our administration of oxygen therapy.3,4 Of these, five trials examine the administration of LTOT. The Nocturnal Oxygen Therapy Trial (NOTT) and MRC Working Party Trial (MRC), from 1980 and 1981 respectively, are the only trials to show a survival benefit for LTOT in COPD.5,6 NOTT was a multicenter, parallel-group, open-label, randomized controlled trial. Enrolled patients were required to have PaO2 ≤55 mmHg or PaO2 ≤59 mmHg with edema, hematocrit ≥55%, or electrocardiographic evidence of cor pulmonale. The 203 patients enrolled were randomized to continuous or nocturnal oxygen therapy. At 24 months of oxygen therapy there was a significant decrease in mortality in the continuous oxygen arm of the trial. MRC was a UK trial of similar design that randomized patients with a PaO2 between 40 and 60 mmHg and one or more episodes of heart failure with documented ankle edema to either LTOT or no oxygen therapy. The LTOT group had a significant improvement in 5-year mortality, with an impressive number needed to treat of 4.5.

The remaining trials did not demonstrate a mortality benefit for LTOT, but notably, these studies targeted patients with mild-to-moderate hypoxemia.3 Gorecka and colleagues defined this as a PaO2 of 56-65 mmHg in their inclusion criteria, and Haidl and colleagues, who studied the effect of LTOT on the decline of endurance in patients with reversible hypercapnea, included only patients with a PaO2 >50 mmHg.7,8 These two trials were not powered to assess mortality, but for many years were the only available evidence regarding LTOT in this population. However, the 2016 Long Term Oxygen Treatment Trial has provided strong new evidence supporting the conclusions of these previous studies.4 This multicenter, parallel-group, randomized, unblinded trial enrolled 738 patients. With more patients than all previous LTOT trials combined, it is the largest trial ever to examine this therapy. Initially, the trial was designed to assess whether LTOT would result in longer time to death compared to no oxygen therapy in patients with moderate desaturation, defined as a resting SpO2 of 89-93%. It was amended after seven months, as the trial’s design was deemed to be flawed due to lower-than-projected mortality. It was redesigned to utilize a composite primary outcome of time to either death or hospitalization for any cause.  Furthermore, noting the phenotypic overlap between patients with moderate resting desaturation and exercise-induced desaturation, the trial was expanded to include patients with exercise-induced desaturation to an SpO2 ≥80% for ≥5 minutes and <90% for ≥10 seconds. The study had 90% power to detect a hazard ratio of 0.60 for the composite primary outcome. There was no benefit to LTOT in the treatment group for the primary outcome, and no benefit for all secondary outcomes; the authors noted that the consistency of the null result across all outcomes strengthens their findings. It can thus be concluded from these studies that LTOT provides a mortality benefit in severely hypoxemic patients with COPD, but does not improve mortality in those with mild-to-moderate hypoxemia.

These trials do not indicate an optimal target range for supplemental oxygenation. The currently accepted oxygen saturation target of 88%-92% is an attempt to provide adequate tissue oxygenation while avoiding the complication of hyperoxic hypercapnea by giving the minimum amount of oxygen needed to stay above severe hypoxemia. This well-known complication was initially attributed inappropriately to a decrease in minute ventilation secondary to increased oxygen delivery to the sino-aortic zones, thus removing the anoxic stimulus to increase respiratory rate; the complication is now attributed primarily to oxygen-induced ventilation-perfusion (V/Q) mismatch and the Haldane effect.9 In normal physiological states, anoxia is a potent stimulus for pulmonary vascular vasoconstriction leading to decreased perfusion of poorly ventilated alveoli. Providing supratherapeutic oxygen counteracts this mechanism and therefore increases perfusion to diseased lung where CO2 cannot be exchanged. This V/Q mismatch leads to increased PaCO2. The Haldane effect refers to the increased ability of deoxygenated hemoglobin to carry CO2, and thus in the presence of oxygen the dissociation curve for CO2 from hemoglobin will shift toward the right, and PaCO2 will increase.9 Normally, this will cause increased minute ventilation leading to exhalation of CO2, but patients with severe COPD may not be able to increase their minute ventilation.

There exist recent clinical studies that address the dangers of over-supplementing oxygen, of which one strongly supports a target oxygen saturation range of 88%-92%. These data come primarily from studies that examine the administration of oxygen to patients experiencing an acute COPD exacerbation in the emergency setting. A retrospective audit of such patients in Denmark from Ringbaek and colleagues found that 88.7% of the 405 enrolled patients arrived at the emergency room with supratherapeutic oxygen levels (defined as SpO2 >93% by the guidelines used in Denmark).10 However, they reported that there was no significant difference in the need for ventilatory support, length of stay, or mortality compared to patients who arrived at the hospital with an SpO2 <93%. They do, however, note that patients with respiratory acidosis receiving inappropriate oxygen therapy, as a rule, will have a normalization of their acid-base status when their oxygen supplementation is titrated down to the appropriate range. It is worth noting that this retrospective study stratified patients by chart-recorded oxygen saturations rather than by controlling for administration method, and thus the patients who were not supratherapeutic may have been sicker. Supporting this, their study notes that having an SpO2 <93% was associated with an increase in in-hospital mortality.

In contrast, a randomized, controlled, unblinded trial of patients experiencing a suspected COPD exacerbation by Austin and colleagues in Australia compared the administration of titrated oxygen therapy (to a target of 88-92%) with a control group that received high-flow oxygen treatment (8-10 L/minute) via a non-rebreather face mask during pre-hospital transit.11 Mortality was the primary outcome. Paramedics in the study were randomized, although they were first stratified by location in order to equalize duration of ambulance travel between groups. This study also enrolled 405 patients, with 226 patients in the high-flow group, and 179 in the titrated group. In an intention-to-treat analysis, there was a 58% reduction in mortality in the titrated oxygen group. It is also worth noting that the study inclusion criteria were “people aged 35 years or older with breathlessness and a history or risk of chronic obstructive pulmonary disease.” A subgroup was formed of the patients who had pulmonary function tests within the last five years confirming the diagnosis of COPD; in the analysis of this subgroup, the mortality benefit in the titrated therapy group grew to 78%. Although this trial was not blinded, it is the first randomized trial comparing titrated oxygen therapy to high-flow therapy, and the reduction in mortality is quite significant.

While there are no randomized controlled trials specifically addressing a target oxygen saturation for LTOT, the clinical benefit of LTOT for patients with severe hypoxemia demonstrated by NOTT and MRC, compared to other trials targeting mild-to-moderate hypoxemia, suggest a threshold at which oxygen supplementation is beneficial.3 Furthermore, the Austin study provides novel, high-quality clinical evidence that there is harm associated with not titrating oxygen supplementation.11 The commonly accepted oxygen saturation goal of 88-92% therefore lies within the realm of evidence-based practice, although further trials focusing specifically on LTOT would be valuable.

One comment on “Oxygen Saturation Target of 88-92% in COPD: Evidence-based Medicine?”