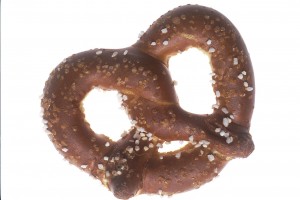 The JNC-8 sodium recommendation for the general population is the equivalent of about 5.75 grams (1 teaspoon) of common table salt. For perspective, an average hamburger with cheese on a bun contains about this amount. It should be no surprise then that the diet of most people exceeds the JNC-8 recommended salt intake per day. In fact, the average diet of American men and women contains about 10.25 grams and 6.88 grams of salt, respectively.4  Yet the antihypertensive effect of salt reduction can be significant. In some individuals, the effect of a 4 gram daily salt limit (when paired with a DASH eating plan) has blood pressure-lowering effects similar to single drug therapy.5

A significant barrier to adopting a low-salt diet is the ready availability of foods that are high in salt. Many fast foods and processed foods contain quantities of salt that approach daily limits. One such food item is the much beloved New York City salted soft pretzel. First created by an Italian monk around 600 AD as a treat for children, these strips of dough resembling a child crossing its arms in prayer made their way across the Atlantic in the 1700s with German immigrants who settled in Pennsylvania. Interestingly, it is believed that pretzel street vendors first started appearing in Germany more than 600 years ago.6 This convenient snack is similarly sold today on most street corners at all hours of the day, representing a ubiquitous opportunity for New Yorkers to consume a substantial amount of salt in the span of minutes.

In New York City, there are approximately 3000 pushcarts that are classified into 4 main types: hot dog, kebab, coffee (“processing”), or fruit (“nonprocessing”).7 NYC soft pretzels are sold at the hot dog carts and are primarily manufactured by the New York Pretzel Company, LLP. According to the NYC Department of Parks & Recreation, the approved price of a pushcart pretzel is $2.8 The average daily revenue of a hot dog cart, including all products, is $200 to $300, but after overhead costs are subtracted, the daily net earnings are around $125.9 One such interesting cost is associated with where the carts go at night. They are typically all stored in garages at the western edge of Midtown.

Wanting to better understand how much these pushcart pretzels contribute to the daily recommended salt intake, I visited 3 different vendors in the vicinity of Bellevue Hospital. At each vendor, I purchased 1 pretzel and recorded the quantity of salt on the pretzel. I also asked 4 questions: How many pretzels do you sell per day? How many of your customers are overweight? How many pretzels does each customer eat? What is the most common ethnicity of your customers?

Concerning the quantity of salt on the pretzels, the average salt was 2 g per pretzel (n=3). The salt on each pretzel was scraped off and weighed on a balance. The individual measurements were 1 gram, 2 grams, and 3 grams (rounded to the nearest gram). Salt found in the pretzel dough itself is estimated from online sources to add another 40% of salt.10 Thus, an average New York street corner soft pretzel contains about 2.8 g of total salt, which is 46% of the daily recommended intake. The carts also sold hot dogs, water, and sodas. All 3 vendors gave answers to my questions. They sold 10, 10, and 40 pretzels per day. The customers tended to be “not fat,” ate 1 pretzel, and were Caucasian.

In summary, a low-salt diet is a nonpharmacologic therapy that can lower systolic blood pressure by 2-8 mmHg. However, the pleasant taste of high-salt foods poses a significant barrier for most patients. Many patients are also unaware of the high sodium content in foods they consume. The available information is often incorrect. A query of “NYC soft pretzel” on Google resulted in inconsistent information, and the most popular result listed 0.2 grams of total salt per pretzel—less than the weight of the salt grains found on each pretzel in our study!  This brief experiment shows that the New York City soft pretzel is a salt bomb with nearly 50% of daily recommended salt in a single pretzel. Interestingly, a single NYC soft pretzel with its 2.8 grams of total salt (>1 gram of sodium) contains just enough salt to incrementally increase blood pressure, according to JNC-8 guidelines. This fact is potentially useful for New York City primary care physicians when discussing how to reduce sodium intake as therapy for hypertension. Indeed, as a unit of measurement for their patients, foregoing 1 NYC soft pretzel would be significantly easier to understand than 1 gram of sodium.