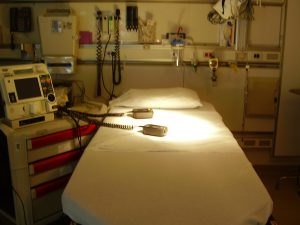 Emergencies happen slowly sometimes. His organs were shutting down – first the liver, its failure evident from his skin’s jaundiced hue; then he couldn’t protect his airway, so they intubated him to make sure he’d keep breathing. That afternoon he’d started passing blood with his bowel movements – lots of blood – and the colonoscopy showed countless excoriations. He was bleeding everywhere, with no one area to staunch with coagulants and staples.

It was my fourth shift on night float, and my ninth day as a doctor. The title felt uncomfortable; despite all the training I’d had up to this point, the leap from med student to resident was humbling. I knew that a hypokalemic patient needed potassium, but when it came to putting in the order, I floundered – Why are there twenty potassium chloride supplements, and which one should I be using? And isn’t potassium chloride what they use to kill people?

I started on days, so I was able to slip under the radar. The ICU is full of nurses, residents, and attendings who all know what to do – I asked a lot of questions, and was able to cover up what I didn’t know with what I did. But nights bring on a brutal reckoning; you can always wake up the resident if you need an answer, but it’s a bad time to ask stupid questions. It’s quiet, and there aren’t many people to distract you from facing, irrefutably, the magnitude of what you don’t know.

So when his hemoglobin dropped on his 10 pm labs, I did what I was supposed to do; I transfused him with blood, and started diuretics so he would urinate off the extra volume. But a few hours later, his foley bag was still empty, and none of the medications I was pouring in had any effect. His kidneys were failing.

Kidney failure is a bad diagnosis at 2 am. The fluid he couldn’t excrete was written all over his body – the skin of his hands taut from edema, the new murmur in his heart belying the excessive fluid rushing through with each heartbeat, the rattle in his lungs the first hint that all our attempts to save his life were flooding his lungs. In medical school, the answer to anuric kidney failure was dialysis, but at 2 am the answer is more like this: check with your resident, who says the patient doesn’t meet criteria for emergency dialysis quite yet. Go back and look at the patient, watch his heart race at 120 beats a minute, look at the ventilator settings, fiddle impotently with your stethoscope. Go back and sit at a computer, look through his record, rack your mind for any ideas. Stare at your hands for a while.

When things go wrong it’s a strange muddle of seemingly irreconcilable feelings: fear that the patient might die, and that I might hasten their decline; sadness at the suffering evident in a patient’s labored breathing, a father’s choked cry; acute awareness of my real or imagined shortcomings; morbid fascination at the pathophysiology unwinding in front of me – the widening pulse pressure of distributive shock, the dusky coloration of fingers losing their blood supply as a vasopressor clamps down peripheral arteries – and the immediate and savage guilt that my curiosity is satiated by another’s suffering.

At 4 am those emotions come unfiltered, unleashed by the encroaching delirium of my sleep deprived mind, experienced through a caffeinated veneer superimposed on the fatigue of another night in the hospital after a few hours of sleep stolen from the humidity of a thick summer day. Any time I pause long enough to process my patient’s decline I get sucked into the ambient sounds of the ICU, which are no longer masked by the cheerful cacophony of a daytime unit. The hiss of 4 dyssynchronous ventilators breathing for 4 sedated patients, the rhythmic tone of a patient’s heartbeat on the monitor nearby. The mechanical voice – “system processing, stand clear” – as a defibrillator is calibrated. I try to escape by reading up on treatment options for my patient, but close the window when the words start to blur. Massive transfusion is historically defined as the replacement by transfusion of 10 units of red cells in 24 hours. In patients with hepatorenal syndrome who are critically ill, we suggest initial treatment with norepinephrine in combination with albumin.

5 am is when it starts to fall apart. Half the clocks are broken, and the ones that work all read a different time. One reads 8:05, when there was still enough going on – residents finishing notes, nurses calling out to verify meds – to distract me from my thoughts. A patient coughs gratuitously, and spits into a cup by her bedside table. Another reads 11:17, when I sent an email to my parents telling them I wasn’t going to be able to hop on a phone call for a few days. The telemetry monitor blares as a patient kicks into non-sustained V tach for a few beats before dropping back into sinus rhythm. Glucocorticoid therapy for severe alcoholic hepatitis typically consists of prednisolone 40 mg per day for 28 days. Another says it’s 1:28, which would have been wonderful – my friend Sam was sending pictures from a party up in Yonkers, and Mike was flooding my phone with articles and drawings borne of the hypomanic episode he’d plunged into three days prior. But even Mike was starting to nod off around 5 am, and with that my last connection to the outside world was gone.

The first time I had a patient with decompensated liver failure it was almost funny. The guy shows up to the emergency room because his chest was hurting, but hadn’t he noticed that he was bright yellow? Then it was exciting diagnosing uremic pericarditis, interesting to learn the diagnostic complexity of hepatorenal syndrome, but his responses to my questions were getting shorter and shorter and the GI specialists still didn’t want to start steroids (“we really ought to get a biopsy, this might not be alcoholic hepatitis”), but his creatinine was going up as his sickness choked off his kidneys and then he stopped talking altogether and I walk in one morning to find him moaning – no, roaring – his wordless invocations, his guttural howls nearly masking the sound of his mother crying as her only son – so young – told us in his own way that he was dying.

And as the haze of 5 am turns into 6 the narrative of these two patients weaves inextricably together before snapping apart, falling together again. I should have given him steroids. I need to check another CBC. The coagulation system should be frequently monitored with measurements of the PT, aPTT, fibrinogen concentration, and platelet count. I could have pushed harder for his care, I need to get him two units of red cells and some plasma.  A high-pitched alarm goes off as a patient turns in her sleep and occludes the IV dripping zosyn into her veins. Accepted urgent indications for dialysis in patients with AKI generally include refractory fluid overload, severe hyperkalemia, signs of uremia, severe metabolic acidosis, and certain alcohol and drug intoxications. Couldn’t we have put him on dialysis before he tanked, this man needs dialysis or he’s going to drown in his own lungs, why hadn’t I just given him the steroids?

At least when someone is actively dying you can do something about it – step up for chest compressions, plunge the needle in for an ABG, shout the patient’s medications and lab values and imaging results – but no one tells you what to do when you’re caught in purgatory with a dying man. So I pull up the nephrologist’s number for the 8th time, look at the patient’s vitals – still shitty – pull up his lab values to construct the argument for emergent dialysis, lose my nerve, walk into the patient’s room and watch his chest wall rise and fall with a jolt as the machine forces air in, lets it out, forces it in.

Dawn is coming up over the east river, and in a few hours we’ll be discussing him in morning rounds, the academic banter of fresh frozen plasma versus prothrombin concentrate complex, pressure support ventilation versus PRVC feeling like a sheet pulled over a man with no voice save the telemetry alarms. I won’t be alone with my thoughts, but I’ll still have nothing to combat inevitability; his care will move forward, but he’ll still be dying.

I don’t believe in heaven, but I do believe in fentanyl and hepatic encephalopathy. I hope his mind is somewhere more beautiful than this – bliss clouds of the days before his marriage fell apart and he replaced her with vodka, scattered snippets of the unburdened laughter of his childhood when his life stretched out before him with its limitless open doors, hallucinatory split lines where I give him steroids and he makes it this time, and he watches the sunrise unburdened by his foley and the vent, unbothered by the inevitable dyspnea of his half-drowned lungs, free from my insecurities and insufficiencies and the demons I drag of patients past.