Why We Do What We Do: The Evidence Behind Rapid Response Teams 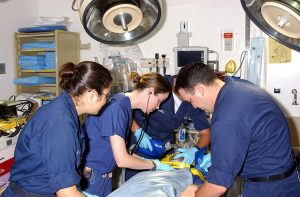 “Rapid Response Team to 7W. Rapid Response Team to 7W.” After switching elevators and waiting for security to buzz you in through the double doors, you see your fellow residents rushing to one of the corner rooms. When you arrive, med consult is calmly delegating various tasks to nursing and residents: vitals, EKG, ABG, CXR, IV access. They quickly review the patient’s history and medications. Depending on the acute condition—respiratory failure, cardiac arrest, septic shock—interventions such as NIPPV, fluids, antibiotics, diuretics, ACLS are implemented to help stabilize the patient and, if appropriate, expedite his/her transfer to the ICU.

Multidisciplinary Rapid Response Teams (RRT) or Medical Emergency Teams (MET) are groups of hospital personnel—nurses, critical care nurses, respiratory therapists, and physicians (with MET always including an MD)—that promptly bring Intensive Care Unit (ICU) level care to acutely deteriorating inpatients outside the ICU. Rapid Response Systems (RRS) became a new hospital standard in 2004, in response to the Institute of Healthcare Improvement’s “100,000 Lives Campaign,” an initiative to decrease in-hospital morbidity and mortality.1,2 Within a decade, RRS were established in 65% of hospitals nationwide.3 The reasoning behind the creation of these teams is clear: there are often clues as to which patients may deteriorate, well before the need for chest compressions and defibrillation. Vital sign derangements and acute changes in mental status may be present 8–48 hours prior to in-hospital cardiopulmonary arrest (IHCPA).2,4 Implementing a system to identify, assess, and treat patients at risk for rapid decline prior to a catastrophic event should, in theory, save lives “either by initiating changes in care that prevent the arrest or by facilitating transfer to an ICU, where fast resuscitation efforts following a cardiac arrest are more likely to be successful.”1 However, the evidence to support this now ubiquitous healthcare delivery paradigm is surprisingly mixed.

The initial studies of RRS implementation began with single institutional experiences which yielded mixed conclusions. Beitler et al and Lighthall et al both showed that adopting RRS was associated with a significant reduction in cardiac arrests and improvement in hospital-wide mortality.2,5 However, Chan et al, Segon et al, and Shah et al, all failed to show any significant benefit of RRTs with similar outcome measures.6-8 The lack of effect noted in these institutional studies were hypothesized by Beitler et al to be attributed to underutilization and delayed activation, thereby minimizing improvements in clinical outcomes gained with adopting an otherwise effective RRS.2

One of the most widely cited negative studies on RRS, came from an Australian multi-centered, clustered-randomized controlled trial conducted by Hillman et al who showed that the MET system did not substantially affect the incidence of cardiac arrest, unplanned ICU admissions, or unexpected death.9 However, it should be noted that, in this study, only 30% of patients with documented calling criteria were referred to METs, and, of patients with reported adverse events, less than half had vital signs recorded beforehand.10 The largest multi-institutional study examining RRS outcomes in US hospitals came from an analysis of 10 acute tertiary care centers in Washington state.3 Controlling for severity of illness, Salvatierra et al showed improved mortality in 6 out of 10 hospitals post-RRS implementation. However, the study was quick to point out a critical cofounder—overall hospital mortality has been declining steadily in the US. In 2016, patients with IHCPA had close to a 25% chance of surviving to discharge, up from 13.7% in 2000 and 22.3% in 2009.11,12 This calls into question the degree that RRTs have affected this trend in contrast to other factors such as improved coronary interventions.3 It highlights a major limitation of the “before-and-after intervention” approach to study design, since results can be confounded by other unrelated advancements in care impacting IHCPA that have accompanied RRS implementation.

RRS effectiveness has been well studied through systematic reviews, as it is impractical, perhaps even now unethical, to randomize standardized RRS implementation and no RRS implementation by patients or hospital. While earlier systematic reviews of RRS did not find a significant reduction in IHCPA or mortality, the positive impact of these interventions was manifested when these analyses were extended to include more recent studies.13-15 A 2015 systematic review and meta-analysis by Maharaj et al examined 29 studies conducted between 1990 and 2013. They showed that the implementation of RRTs significantly reduced overall in hospital mortality in adult (RR, 0.87; 95 % CI, 0.81–0.95, P<.001) and pediatric (RR, 0.82; 95 % CI, 0.76–0.89) patient populations.16 Additional analyses failed to show a dose-relationship between effectiveness of RRS and duration of implementation of these systems or the number of RRS activations per 1000 admissions.16 When looking at optimal composition of RRS, the presence of a physician on the RRS did not impact hospital mortality.16 The most recent meta-analysis by Solomon et al also supported the benefit of RRS with both IHCPA and overall hospital mortality rates.15 Nonetheless, observational studies lacking control groups limit the meta-analyses and other systematic reviews on RRS. Furthermore, variability among RRS composition, training, and threshold for activation may preclude evaluating these interventions across clinical and geographic setting.

Numerous components of RRS research make it difficult to form conclusions about their effectiveness.6 Despite this, the positive effects of its implementation become clearer as the tenure of RRS grows and hospital cultures adapt to this new tool. Future studies should expand beyond IHCPA and hospital-wide mortality measures and look at more nuanced benefits of RRS eg, improved clinical skills and decision making of house staff and nurses; elevated levels of patient and family empowerment and satisfaction; or facilitated dialogue regarding end-of-life care among terminally ill patients.6,17

The effect on goals-of-care is a particularly interesting area of future inquiry. One potential factor contributing to the reported benefit of RRS on mortality statistics is that patients and families may engage in more decisive goals-of-care discussions after an RRS-activated event. Felner et al compared Do Not Resuscitate (DNR) orders placed pre-RRS implementation (1998–2005) and post-RRT implementation (2006–2008) at a VA hospital, and found the ratio of DNR orders to cardiopulmonary resuscitations in the pre-RRS time period ranged from 0.76 to 1.40, as compared with a ratio of more than 2.0 to 1.0 during the period after the system was initiated.18 It could be hypothesized that with more terminally-ill patients deciding to be DNR, the patient population eligible for advanced resuscitative techniques inherently becomes more robust, leading to improved mortality outcomes observed with RRS implementation. Perhaps the use RRS can not only improve hospital-wide mortality, but also indirectly benefit end of life care as a whole.18