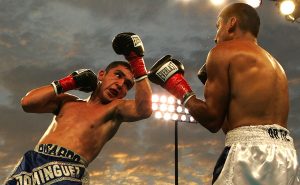 Injuries associated with amateur boxing include facial lacerations, hand injuries, and bruised ribs.1 While many of the superficial wounds and bone fractures can completely heal, brain damage secondary to boxing has also been well documented and can often have detrimental long-term health effects.2 Boxers are at risk for sequelae of traumatic brain injury (TBI) as a consequence of repeated blows to the head.  Traumatic brain injury can be classified as acute TBI, commonly known as a concussion, and chronic TBI, sometimes called chronic traumatic encephalitis (CTE).3 Concussion represents an immediate and transient response of the brain to trauma,4 while CTE is a neurodegenerative disease that can present years after initial injury.5

Concussions occur less frequently in amateur boxing than professional boxing.6 The reduction of concussions in amateur boxing could be attributed to shorter match durations and greater implementation of stringent safety considerations, including standing eight counts.  Still, amateur boxers may be at a 13% chance of concussion every time they step into the ring for competition.7

Despite evidence of concussions occurring as a result of amateur bouts, there has been little study of the incidence of chronic TBI in amateur boxing. In a systematic review on CTE incidence in amateur boxers, 42% of studies found some evidence of relevant brain abnormalities in amateur participants.8 However, there was no strong association found between amateur boxing participation and CTE in the systematic review, though most studies included in the review were not sufficiently designed or statistically powered to uncover such an association. With CTE developing years or even decades after initial concussive episodes, more frequent and longer-term follow-up may be required to fully appreciate the incidence of CTE in amateur boxers.9

A study measuring markers of neuronal and axonal injury in amateur boxers found a four-fold increase from baseline in serum neurofilament light (NFL) protein three months after participation in an organized boxing match.10 Risk factors for raised biomarker concentrations included being hit over 15 times in the head during an amateur bout and grogginess after fighting. Further investigation into neuronal damage biomarkers in boxers could provide promising diagnostic and prognostic information regarding acute and chronic TBI. Of note, there was no significant association found in a 2013 study between levels of neuronal and axonal injury biomarkers and apolipoprotein E, a gene associated with predisposition to concussions.11

The ability to assess for genetic predisposition to chronic brain injury would be helpful in identifying those at greatest risk for deleterious effects of the sport. A 1997 study of 30 boxers showed the apolipoprotein E genotype to be associated with high chronic brain injury (CBI) scores in high-exposure boxers, defined as boxers with greater than 11 professional bouts.12 While this study was statistically underpowered, it set a valuable conceptual framework to build upon in identifying nonmodifiable risk factors for TBI in amateur boxers. A similar study in 2011 of nearly 200 college athletes, predominantly male football players, found that certain APOE allele carriers were ten times more likely to have a history of concussions than noncarriers.13 More studies directly evaluating the relationship between APOE genotype as well as other potential genetic risk factors for traumatic brain injury and concussions sustained in amateur boxers will be useful in establishing preventive health measures for these individuals.

Modifiable risk factors in amateur boxing are the subject of considerable controversy. Some factors that may result in less acute traumatic brain injury include safer sparring practices leading up to competition, ringside physicians evaluating boxers for possible signs of TBI, and greater referee predilection to stop uncompetitive bouts. Additionally, the use of gloves and headgear in amateur boxing may serve a protective role against sustaining linear blows, but appears to lack similar efficacy in protection against hooks.14 The effects of boxing glove weight and the use of headgear on concussion incidence in competition remain unknown.

There are physicians who suggest that the greatest modifiable risk factor of all is the existence of boxing in the first place, calling for outright abolition of the sport.15 A ban on professional or amateur boxing seems unlikely in the near future, given the current popularity of the sport. Rather than shun the existence of boxing, physicians should play an active role in the development of safer practices.

One idea proposed in a 2007 study analyzing the prevention of fatalities in boxing suggested the implementation of a computerized warning system that encourages officials to stop a fight based on statistical differences in punch volume between two unevenly matched boxers.16 Such a system, with lower thresholds for alarm to reinforce referee and ringside physician judgment, may be of use in curbing concussions sustained in amateur boxing. Another study of high schoolers playing football found that, for every one-pound increase in neck strength, odds of concussion decreased by 5%.17 The study concluded that neck strength screening may be valuable in identifying high school athletes at risk for developing concussion and implementing concussion prevention programs. No similar study has been completed for amateur boxers, but such a study could provide physicians with greater insight into the evaluation and management of patients who are active boxers.

Amateur boxing, a sport with thousands of male and female participants, merits greater attention from the medical research community. Further study of acute and chronic TBI incidence in amateur boxing, molecular markers as signs of brain damage and predictors of health outcomes, and identification of modifiable and non-modifiable risk factors may ensure better long-term health outcomes in these individuals.