The History Behind Aspirin 81 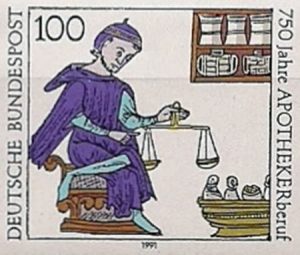 Patients often come into clinics on a grocery list of medications. Common prescriptions include lisinopril 20 mg, amlodipine 2.5 mg, metformin 500 mg, and aspirin 81 mg. One dosage stands out from the others. While most medications come in dosages of round numbers or common decimals, low-dose aspirin has a standard dose of 81 mg.

Why is aspirin available at a dose of 81 milligrams? The answer is historical in nature and is rooted in a medieval and now defunct system of measurement called the apothecary system of weights and measures. The full explanation of aspirin 81 requires some background information on the apothecary system and is best explained in comparison to the more familiar metric system.

The apothecary system of weights and measures was developed and formalized in England and France during the early Middle Ages. This system came to be used for medication dosages before the development of the now-standard metric system in the late 1700s. In the metric system, mass is based on the kilogram, with other units defined relative to the kilogram. For example, the gram is one one-thousandth of a kilogram, and one milligram is one one-millionth of a kilogram. In the apothecary system, the base weight was derived from the weight of a grain of barleycorn. This unit was creatively termed the grain, abbreviated gr.1 The grain is equivalent to 64.8 mg.2

The grain was used to define the larger units in the apothecary system. England and France both used scruples, drams (sometimes written as drachme), ounces, and pounds as larger units built from the grain. However, the countries defined the units differently. In France, 24 grains formed 1 scruple, while in England, 20 grains formed 1 scruple.1 Above that, the systems were aligned, with 3 scruples making one dram, 8 drams making one ounce, and 12 ounces making one pound.1,3 That is correct: as opposed to the modern pound (also known as the avoirdupois pound), 12 ounces made 1 pound, as opposed to 16 ounces.1 The differences between the number of grains in a scruple between the two countries led to one English ounce weighing 480 gr, while one French ounce weighing 576 gr. One English pound weighed 5760 gr, and one French pound weighed 6912 gr.

Of note, the barleycorn grain has a history of being used to derive other units. The medieval English inch was defined as three medium-sized barleycorn grains placed end-to-end, which is approximately the same length of the inch used in America to this day.4

In 1790, French scientists, at the request of the French government, began to devise a new measurement system, leading to the creation of the metric system. By 1799, the kilogram was defined as the mass of one cubic decimeter of water at 4 degrees Celsius.5 After being established in France, the metric system was instituted in England via legislation in 1824, 1878, and 1963.1

Aspirin, codeine, and morphine were some of the drugs commonly ordered in grains as opposed to milligrams.2,8 Aspirin dosing is rooted in this history. The standard adult aspirin dose was 5 gr, or 325 mg in metric, the dose still used today for analgesia. Low-dose aspirin was one quarter of the standard dose, 1.25 grains, which converted to 81 mg. This dosing regimen has persisted to modern times.8

Although the apothecary system of weights and measures is no longer in official use, its impact is still alive whenever physicians prescribe aspirin 81 mg, serving as a connection to the prescribing practices of generations of physicians and pointing to the hidden and untaught history of pharmaceutical weights and measures.

By Joshua Novack, a 3rd year medical student at NYU School of Medicine