Is There a Role for DOAC Level Monitoring in Clinical Practice? 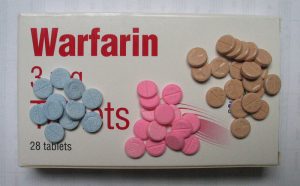 Direct Oral Anticoagulants (DOACs) are a class of medications consisting of the thrombin inhibitor, dabigatran (Pradaxa), and the factor Xa inhibitors, rivaroxaban (Xarelto), apixaban (Eliquis), and edoxaban (Savaysa). These therapies are rapidly changing the way physicians manage venous thromboembolic disease (VTE), ischemic stroke prophylaxis in non-valvular atrial fibrillation, and, soon, stable coronary artery disease 1-9. DOACs have demonstrated an improved risk-benefit profile for long-term anticoagulant therapy compared with standard-of-care vitamin K antagonists (VKA) such as warfarin. With their predictable pharmacokinetics and pharmacodynamics, DOACs can be given in fixed doses without need for routine monitoring10,11.

Despite its extensive drug interactions and frequent need for monitoring and dose adjustments, warfarin continues to have the clear advantage in terms of rapid, reliable, widely-available laboratory testing and drug reversal agents. For an anticoagulated patient presenting with an acute bleed, thromboembolic event, and/or a need for an urgent invasive procedure, the evidence and tools available to reliably assess levels of anticoagulation and reverse continue to buoy warfarin’s modern clinical relevance. A DOAC lab measurement analogous to prothrombin time (PT)/international normal ratio (INR) would be a valuable management tool for this type of anticoagulant therapy. This review will explore the current state of DOAC level monitoring and its potential role/limitations in clinical management.

To Measure or Not to Measure

The general consensus in the medical community is that patients receiving DOAC therapy do not require routine monitoring or dose adjustment.12 However, it is prevailing opinion that the anticoagulation (AC) effect of a DOAC is generally directly proportional to its plasma concentration. Studies show that higher plasma drug levels may be associated with bleeding and lower plasma levels with increased stroke rates 12-14. Given this, it is becoming increasingly accepted that certain “special” clinical situations warrant DOAC level measurement including: (A) acute/chronic renal insufficiency; (B) thrombolytic therapy consideration (e.g. Tissue Plasminogen Activator [tPA]); (C) clinically significant bleeding; (D) recurrent VTE/therapeutic failure; (E) reversal of anticoagulation by antidotes; (F) urgent or emergent surgery/invasive procedures 10,13,15-22. Additionally, there are other scenarios where DOAC levels would be potentially useful such as with patients at extreme body weight, presence of interacting medications, and confirmation of chronic anticoagulation following initial loading period 10,13,18.

There are two types of tests in the situations outlined above that can help guide management for patients on DOACs: 1) a screening assay for when a clinician needs to determine quickly the presence or absence of the drug (e.g. prior to administering thrombolytics or urgent/emergent surgery); 2) a quantification assay for when a clinician is concerned for abnormal absorption/clearance/metabolism (e.g. extremes of weight, renal insufficiency, medication interaction)14.

Traditional PT/aPTT cannot be used to draw conclusions on levels of AC in patient on DOACs due to variability in prolongation which does not correlate with level of AC 10,23,24. A normal TT can be used to rule out the presence of dabigatran (direct thrombin inhibitor), but not FXa inhibitors10.

Non-dedicated/general anti-Xa assays typically used to monitor heparin therapy are able to reliably exclude the presence of direct factor (F) Xa inhibitors, but are affected by a high inter-assay variability and thus should not be used to quantify direct anti-Xa inhibitors25.

An ECA can accurately assess dabigatran plasma concentrations in the low (< 50 ng/mL) and  normal range (from 50 to 500 ng/mL). Of note, this assay is not sensitive to heparins which can be useful in cases of concomitant heparin administration25.

Anti-Xa assays with specific apixaban, edoxaban or rivaroxaban calibrators are able to reliably measure individual DOAC plasma concentrations 25.  Instead of a general Xa level, these tests result with a drug-specific plasma level in ng/mL. It is important to keep in mind that, unlike an INR for VKA, DOAC plasma levels should not be used as a metric for drug adherence due to the relatively short therapeutic half-lives for these agents. Instead, it should be a marker of current AC activity. If assessing for steady state levels, this level should be drawn as a trough which, unlike peak levels, have been correlated with bleeding risk 26-28.

Turnaround time for these tests is dependent on assay availability and lab staffing. At centers where the use of the above assays are more common, results are available between 1 (stat) and 4 hours (routine).29

Clinical Application of DOAC Levels in the Inpatient Setting

If a patient on DOAC therapy presents with an acute thrombotic event, the first decision point is whether or not tPA is being considered. If yes, providers should send a DOAC-dedicated anti-Xa level for quantification and screening purposes. Plasma levels of 10 (apixaban), 50 (dabigatran) and 100 (rivaroxaban) ng/mL have been proposed as cut-offs for considering tPA in acute ischemic stroke. However these values are based on drug-specific pharmacokinetic studies and expert opinion rather than robust, prospective clinical trials, so risks and benefits of thrombolytics should be weighed carefully in each individual case 25,30. If a dedicated anti-Xa assay is not available, a qualitative screening test (e.g. general anti-Xa/TT [depending on the DOAC]) should be sent to detect the presence of clinically significant AC activity to aid in the individual risk-benefit assessment.

In cases where tPA is not being considered, a quantitative DOAC-specifc drug trough level would be of most clinical value since this will reflect the AC steady state. If the level is lower than typical trough plasma concentration ranges, providers should assess for compliance and potential drug interactions such as with concurrent use of CYP3A4/P-glycoprotein inducers 31.  If these factors are ruled out, a switch to another DOAC or warfarin/enoxaparin should be considered rather than increasing the dose of the original DOAC 11,32.

The Subcommittee on Control of Anticoagulation of the International Society on Thrombosis and Haemostasis (ISTH) recommends administration of an antidote for patients presenting with  clinically significant bleeding & a DOAC concentration > 50 ng/mL33,34. In cases of a hemodynamically unstable/life-threatening bleeding event, in addition to supportive management and hospital-transfusion protocols, available antidotes should be given as soon as possible: idarucizumab, 5 g, in patients treated with dabigatran; or nonspecific reversal agents for Xa inhibitors, e.g. PCC/aPCC, 50 IU/kg followed by 25 IU/kg, if required25. Coagulation studies should not delay treatment, but if able to be drawn (along with basic chemistry and hepatic panels), a quantitative DOAC trough will be helpful in assessing whether drug accumulation was contributing to the bleed etiology (e.g. secondary to inappropriate dosing, renal/hepatic insufficiency, and/or drug interaction, etc.,). In some cases, they may be used as metrics for correction of hemostasis after antidote administration or to guide additional dosing of antidote.

With emergency surgery for life-threatening conditions, an appropriate antidote for neutralizing anticoagulant effect should be administered without delay 25. According to the subcommittee of ISTH on the use of specific antidotes for the reversal of DOACs, patients requiring an urgent intervention associated with a high risk of bleeding and a DOAC plasma concentration > 30 ng/mL warrant antidote administration. Recommendations regarding duration of pre-op DOAC interruption will be covered in the following section.

Clinical Application of DOAC Levels Monitoring in the Outpatient Setting

Though there is no “safe” operative threshold for DOAC plasma concentration, a pre-operative cutoff level (≤ 30 ng/mL) for dabigatran and rivaroxaban has been proposed 11,33. A prospective multicenter study by Godier et al. found that stopping DOACs 3 days before a procedure achieved this cut off value in nearly all patients35. Moderate renal impairment, especially in dabigatran-treated patients, and the use of antiarrhythmics in anti-Xa-treated patients should result in a longer DOAC interruption 25,35. The European Heart Rhythm Association (EHRA) recommends stopping factor Xa inhibitors at least 24 hours prior to surgery with a low bleeding risk and at least 48 hours prior to surgery with a high bleeding risk with a longer abstention time (≥ 36 and ≥ 48 h, respectively) in patients with severe renal impairment (CrCl = 15–30 mL/min)11. For dabigatran, due to its higher percentage of renal clearance, patients should allow ≥ 36 (low risk) and ≥ 72 h (high risk) if their CrCl is 50–80 mL/min and ≥ 48 and ≥ 96 h, respectively, for CrCl 30–50 mL/min11. If this protocol is followed correctly, confirmatory laboratory testing is usually not indicated. However, some patients with multiple factors that interfere with the pharmacokinetics of DOACs could benefit from laboratory testing especially if they are set to undergo interventions associated with a high bleeding risk (e.g. neuraxial,, cardiovascular procedures, etc.,)25.

EHRA guidelines recommend clinical assessment and routine lab monitoring every 6 months for patients taking DOACs but do not recommend any monitoring of coagulation assays 31. The American College of Chest Physicians has not made a recommendation for DOAC monitoring36,37. Routine clinical monitoring consists of reviewing medication adherence and dosing frequency/timing, evaluating comorbid disease, assessing for potential concurrent interacting medications coupled with laboratory monitoring consisting of serum creatinine (sCR), liver function (LFTs), or complete blood count (CBC) 37. In their recent clinical practice review, Conway et al. recommended that patients who are obese/underweight, and/or have CHA2DS2-VASc or HASBLED scores of 3 or higher undergo monitoring at least every 6 months to ensure thromboembolism and bleeding complications are minimized37.

Despite an ever-growing list of indications, favorable pharmacokinetics and pharmacodynamics, and, at least non-inferiority compared to dose-adjusted warfarin, there remains a specter of concern when it comes to management of adverse events with DOAC therapy. This is further complicated by the lack of rapid quantitative tests to measure plasma levels of DOACs in contrast to the common and readily available PT/INR for warfarin 11,36,38. Given this conundrum, internists and other first-line physicians should be aware that measuring DOAC plasma drug levels could provide useful clinical information in the following clinical situations: suspected high levels/excess effect; apparent therapeutic failure; determining the need for reversal11,39.

A DOAC-calibrated anti-Xa assay is best for both screening and quantification of DOAC activity. However, if this is not available, screening tests such as a normal TT or general anti-Xa assay can effectively rule out the presence of physiologically significant levels of dabigatran or FXa inhibitors, respectively. There is no role for PT/aPTT for these purposes. These values can help inform clinical decision making in the acute inpatient setting as well as managing/monitoring this patient population in the clinic.

While DOAC lab measurements and reversal agents may represent the future of AC monitoring and management, it is clear that a significant amount of work remains. Though the prevailing expert opinion is that there is no current role for DOAC level monitoring in the clinical setting, it should be noted that the randomized control studies these conclusions are based on have limited data on certain patient populations such as renal insufficiency, older age, and extremes of weight which have been shown to significantly correlate with supratherapeutic DOAC level concentrations40.  Currently available ranges for therapeutic DOAC plasma concentrations must be validated in prospective studies to ensure that clinical decisions based on these numbers are optimally balanced in order to avoid bleeding complications while preventing thrombosis 25.

The emergence of the DOACs has ushered in a revolution in anticoagulation care. That DOACs offer relative ease of use and enhanced safety relative to warfarin is incontrovertible. Routine DOAC monitoring is not indicated. However, the widespread use of these novel anticoagulants including in populations that have not been rigorously studied such as patients with renal or hepatic dysfunction or those at extremes of bodyweight, raises genuine safety concerns. The ability to measure should provide reassurance to patients and providers alike. The major limitation to testing is the lack of widely available commercial drug specific activity assays. Some centers including our own have developed in-house assays, however this is labor intensive and relatively few centers offer this testing. More studies will be needed to ultimately validate the clinical utility of testing. Meanwhile, my prediction is that testing will have a role in select populations.