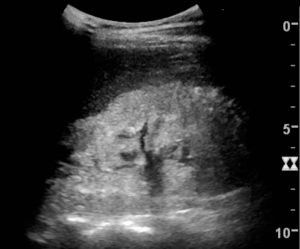 The mechanism of sodium retention and edema formation in patients with nephrotic syndrome has long been highly contested in the nephrology world. The traditional teaching was that proteinuria leads to hypoalbuminemia, and the decreased plasma oncotic pressure results in the movement of plasma from intravascular space into the interstitial space, causing edema. This underfilling of the intravascular space leads to activation of the renin-angiotensin-aldosterone system, which would lead to renal sodium retention.

This intravascular underfilling model may seem physiologically sound, but there are numerous flaws to that mechanism. First, studies have found considerable heterogeneity in the activation of the renin-angiotensin-aldosterone system among nephrotic patients. Boer and colleagues found that plasma renin activity was actually suppressed in 41% of nephrotic patients, normal in 48%, and elevated in only 11%,1 and Brown and colleagues found similar variability.2 Further complicating this underfilling model, there are many states, such as HIV and malignancy, that cause hypoalbuminemia but do not result in edema. One study found that only 25% of hospitalized patients with serum albumin less than 3 g/dL had edema, and in fact none of the patients with serum albumin levels less than 1.5 g/dL had edema.3  Another study looked at 21 case reports of analbuminemia, a rare congenital disorder characterized by very low levels of albumin, and found that 43% of patients had no edema and 38% had only mild ankle edema.4 In addition, studies of unilateral renal injection of the aminonucleoside puromycin showed unilateral proteinuria and unilateral sodium retention,5 suggesting that sodium retention is related to intrinsic renal factors of sodium metabolism not explained by underfilling. Clearly, hypoalbuminemia alone is not sufficient to drive sodium retention and edema in nephrotic syndrome.

Recently, studies have found evidence for an alternate model for edema and sodium retention in nephrotic syndrome. Svenningsen and colleagues6 proposed a mechanism of renal-aberrant response to nephrotic urine, based on their study of nephrotic rats. They detected increased levels of plasminogen filtered into nephrotic urine and demonstrated that the plasminogen is activated into plasmin in the renal tubules by a protein called urokinase-type plasminogen activator (uPA). They found that plasmin then proteolytically cleaves and activates the epithelial sodium channel (ENaC) in the collecting ducts, which promotes sodium reabsorption and leads to increased volume retention and pedal edema. They also showed that nephrotic urine from human patients contained plasminogen and plasmin while control urine did not, and found that human nephrotic urine also stimulated ENaC activity. Another study demonstrated that remission of nephrotic syndrome is correlated with decreased urine plasmin and ENaC activity, and they found that the urinary plasminogen-plasmin/creatinine ratio was 226 μg/mmol in nephrotic urine versus a ratio of only 9.5 μg/mmol after remission.7

Putting this all together, glomerular damage in nephrotic syndrome results in increased plasminogen filtration into urine, which is activated into plasmin within the tubules by uPA. Plasmin then activates ENaC, resulting in sodium retention.

The new model raises the question of potential therapeutic targets in nephrotic syndrome. Amiloride is an inhibitor of the ENaC and has also been shown to inhibit uPA activity.8 Several studies have found that amiloride inhibits the conversion of plasminogen into plasmin in the urine of nephrotic rats.6, 9 Amiloride treatment results in lower blood pressure by an average of 6.3/3.0 mmHg, as well as lower urine albumin/creatinine ratio in nephrotic patients.10 However, another study of amiloride in type 2 diabetic patients with proteinuria raised concerns of hyperkalemia and acute kidney injury.11 Development of new agents to specifically target uPA could have the benefit of inhibiting the activation of plasminogen, thereby decreasing sodium reuptake, with the advantage of bypassing the potentially deleterious effects of inhibiting ENaC directly. More research is needed for the development of such agents.