What Is The Role Of Serologic Testing For Immunity To Measles During An Outbreak? 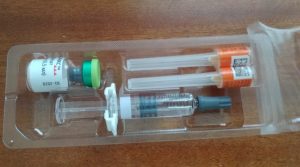 Measles was declared eliminated from the US in 2000. Our country, however, is currently in the midst of the largest measles outbreak since 1992. As of July 25th, 1164 cases across 30 states have been reported in 2019.1 In New York City, more than 642 cases have been confirmed since September 2018, with 90% occurring in the Brooklyn neighborhoods of Williamsburg and Borough Park, and 72% in unvaccinated children and adolescents under 17 years of age.2 The outbreak has prompted the introduction of a number of measures in New York City and New York State aimed at increasing vaccine uptake and controlling the spread of the virus. These measures have included an order by the NYC Health Commissioner to vaccinate or face a $1000 fine in select Brooklyn zip codes,3 temporary changes to hospital visitation policies,4 preschool closures for failure to comply with Health Department orders,5 and controversial bans on unvaccinated children from entering schools, daycares, and public places.6

Measles is a highly transmissible virus with a basic reproductive number (R0) of 12-18. The R0 represents the average number of secondary cases resulting from a single primary case in a totally susceptible population. This translates to a need to vaccinate about 93% of the population in order to disrupt measles transmission and achieve herd immunity.7 Maintaining population-level immunity above this threshold is essential for protecting those with medical contraindications to vaccination as well as those who remain susceptible despite adequate vaccination. Although the vast majority of cases in the current outbreak occurred in unvaccinated individuals, a number of cases had documentation of age-appropriate vaccination. For example, of the 200 cases in Rockland county, ten cases had documentation of one MMR vaccine dose and six cases had documentation of two doses.8 Nationwide, around 13% of measles cases reported between 2001 and 2015 occurred among persons with a documented history of receiving at least one measles-containing vaccine.9

Given that the current outbreak is expected to continue, it is important for clinicians to be able to identify patients with inadequate immunity to measles despite documentation of vaccination. Assessing a patient’s immune status, however, is not a straightforward task. According to recommendations put forth by the Advisory Committee on Immunization Practices (ACIP), immunity to measles can be presumed in patients having at least one of the following: 1) documentation of age-appropriate immunization (typically two MMR doses, one at 12-15 months and a second at 4-6 years of age), 2) lab evidence of measles immunity, 3) lab evidence of measles disease, or 4) birth year before 1957.10 When no outbreak is occurring, the ACIP definition for presumptive immunity is likely a sufficient proxy for absolute immune status (an individual’s true immunologic ability to resist infection by a particular pathogen); herd immunity conferred by high vaccination rates serves to protect any susceptible individuals who have been misclassified as immune. However, during an outbreak–when vaccination rates have fallen below the critical herd immunity threshold–absolute immune status begins to determine individual measles risk.11 Relying on a definition of presumptive immunity during a major outbreak, like the one at present, may lead to missed opportunities to offer protection to unknowingly measles-susceptible patients.

There are a number of reasons for which a vaccinated person might develop measles during an outbreak. A single dose of MMR is about 93% effective in preventing measles and 97% effective after a second dose.10 Although the immunologic mechanisms underlying vaccine-induced immunity to measles are poorly understood, failure to seroconvert in response to measles vaccination (primary vaccine failure) is significantly more common among children who receive their first MMR dose before nine months of age.12 The current recommendation to administer the first MMR dose at 12 months of age was developed in response to this observation in order to maximize the tradeoff between the waning of passively-transferred maternal immunity and the maturation of the infant immune system to be able to respond to vaccination.12 Additionally, vaccine-induced measles antibodies can decline significantly over decades in some individuals and do so at faster rates than immunity secondary to natural infection.13 Given that routine measles vaccination only began in 1957, the long-term persistence of vaccine-induced immunity to measles remains to be seen and will become an increasingly important question with the aging of generations born after measles elimination.10 Lastly, improper storage of the MMR vaccine, which requires a cold chain and is deactivated by light, is likely to blame for some cases of measles occurring in persons having documentation of vaccination.10

The most important way clinicians can help control the current outbreak is by addressing the concerns of patients or parents who refuse or hesitate about vaccination. Clinicians should also ensure that patients of all ages have documentation of age-appropriate vaccination or meet other criteria for presumptive immunity. Adults who were vaccinated in childhood may need assistance tracking down these records. Additional consideration should also be given to patients who are residents of measles hotspots–a task aided by electronic medical records (EMRs). At NYU Langone Hospitals, for example, EMR notifications now inform providers when a patient lives in an affected zip code (11205, 11206, 11211, or 11249). In addition to serving as a reminder to consider measles as a possible diagnosis, these notifications should prompt clinicians to perform a risk assessment of the patient’s likelihood of developing measles.

Given that documentation of age-appropriate vaccination may not always equate to measles immunity, it may sometimes be beneficial to obtain serologic evidence of immunity in patients living in measles hotspots, particularly if additional risk factors for exposure or immunologic compromise are present. For example, checking measles-specific IgG levels on a vaccinated adult resident of an affected zip code who works in a hospital, school, or daycare may reveal a need to re-vaccinate. Similar consideration should be given to hotspot residents in whom there is reason to suspect vaccine failure, such as vaccination before 12 months of age or a previous history of failed seroconversion to a measles-containing vaccine.12 Moreover, evidence from a measles outbreak at a US boarding school in 2003 demonstrated higher measles attack rates among students who were vaccinated outside of the US compared to those vaccinated within the US, a difference the authors hypothesized could be due to improper vaccine storage, cold-chain failure, or accuracy of documentation.14 These results suggest that hotspot residents who were vaccinated outside of the US may also benefit from serologic testing for immunity to measles.

One important yet poorly understood caveat is that measles antibody titers may not always correlate with measles immunity. The MMR vaccine induces both humoral and cellular immunity in varying degrees, and thus it is thought that some individuals with undetectable measles antibodies may retain some level of T-cell immunity and may be able to make a completely robust immune response if challenged with wild type virus.15 Further research is needed to understand the relative roles of the cell-mediated and antibody-mediated immune responses in providing immunologic protection against measles.  Providers need to be aware of changing recommendations on the need for various groups to demonstrate actual versus presumptive immunity from their local health departments in the setting of an outbreak.  Clinicians should partner with patients and assess individual patient risks, values, and preferences when making decisions about serologic testing and revaccination.