Inpatient Diabetes: Is There a Role for Metformin? 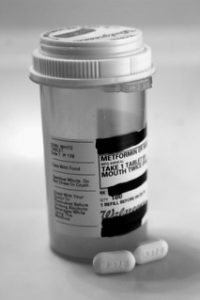 Just 10 words. For almost all admitted type 2 diabetics receiving metformin, this 10-word phrase is automatic. I am sure many medical students before me have asked, “Why hold the metformin?” – especially if it has been well-tolerated and effective. Why give insulin to type 2 diabetics who have never needed it in the past?

Metformin does have an associated risk of lactic acidosis, as well as a few frequently cited contraindications, most notably glomerular filtration rate (GFR) <30 mL/minute, hemodynamic instability, and need for contrast imaging [1]. However, many diabetic inpatients with none of these contraindications have their metformin held anyway.

I turned to the interns and resident on our team for an alternate explanation, but unfortunately their responses were more dogmatic justifications than explanations: “Metformin isn’t an inpatient medication” or “That’s what Dr. X prefers.” Although the evidence underlying this practice remained elusive, it seemed clear that this was the standard of care.

I had the opportunity to revisit the issue when I met Mr. D at the Manhattan VA. He was a 75-year-old obese male with well-controlled type 2 diabetes (A1c 6.8%), hypertension, and osteoarthritis who was admitted for bacterial pneumonia. He was started on antibiotics and sliding-scale insulin and quickly recovered from his infection. However, because of his osteoarthritis and limited mobility, Mr. D requested placement in an assisted living facility. Placement was challenging due to Mr. D’s past history of violence, and his hospitalization lasted weeks.

Over this long admission I got to know Mr. D quite well. In our daily discussions there was one question he repeatedly asked me: “Why do you keep injecting me with insulin? I thought my diabetes was under control.” For Mr. D, much of his motivation for maintaining control of his diabetes stemmed from his desire to avoid insulin injections and multiple daily glucose fingersticks. Unfortunately for Mr. D, his admission came with a painful guarantee of at least three fingersticks a day and trivial injections of 1-2 units of insulin aspart for correction.

Surely there must be good evidence to discontinue metformin (the most commonly prescribed outpatient diabetes medication) and subject Mr. D and all admitted type 2 diabetics to the pain of regular insulin injections. To my surprise, this was an area of controversy in the literature. While the Endocrine Society and American Diabetes Association practice guidelines both suggest that all admitted diabetics be started on insulin, these same guidelines also state that patients can be continued on home oral regimens if appropriate [2,3]. Unfortunately, the guidelines are vague regarding which patients are appropriate for continued home diabetes regimens. However, there are multiple studies published by the American Academy of Family Physicians that specifically recommend continued use of home oral medications in type 2 diabetics with intact kidney function.1,[4]  Despite my efforts, I was unable to find a clear justification for why people with well-controlled type 2 diabetes and good kidney function, like Mr. D, should be started on insulin.

Maybe the reasoning centered on improved glucose control and the reduction of hyperglycemia. This could improve wound healing and immune system function for surgical patients and individuals admitted with infections. However, the literature contradicts this: a multicenter RCT by Dickerson and colleagues found no improvement in glucose control or outcomes when type 2 diabetics had sliding-scale insulin added to their home diabetes medications compared to home medications alone [5]. While very poor glycemic control is certainly harmful [6], tight glucose control can be harmful as well. NICE-SUGAR, a large 2009 ICU trial, found that patients randomized to tighter glucose control (81-108 mg/dL) had a 14% increase in 90-day all-cause mortality compared to the group randomized to a lenient glucose target of <180 mg/dL (NNH=38).[7]

The FDA’s stance regarding metformin and contrast imaging is more conservative than the ACR’s, recommending that metformin be held at the time of contrast imaging for patients with GFRs <60.[9] Prior to restarting metformin, the FDA recommends reevaluating GFR 48 hours after imaging to determine that kidney function is stable.9 However, with regard to local practices, I confirmed with Tisch and Bellevue radiologists that NYU directly follows the ACR recommendations, and would have no reservations about performing contrast imaging with patients receiving metformin. Regarding length of stay, a multicenter RCT found no difference in length of stay between patients on sliding-scale insulin versus home medications.5

It seems more likely that harm could come to a type 2 diabetic from insulin. Insulin carries with it the potential of hypoglycemia, unlike metformin monotherapy. Inpatient units, by their nature, have many moving parts and the potential for unintended events. Patients receive sliding-scale insulin before meals. But what if hospital food is rejected, partially eaten, or not eaten as patients are whisked off the unit for imaging or other tests, sometimes mid-meal? Hypoglycemia from insulin use on the floors is possible and potentially serious.

Remembering the adage “Do no harm,” I think it makes sense to leave well-controlled type 2 diabetic patients on their home metformin on admission. If patients are properly screened, there appears to be very little chance of lactic acidosis and no prolongation of their hospital course if contrast imaging is needed. Appropriate candidates for inpatient metformin treatment are those with good diabetes control as outpatients who do not have decompensated heart failure, renal insufficiency, hypoperfusion, or chronic pulmonary disease.2 As stated, metformin is contraindicated in patients with GFRs <30 mL/minute.

Additionally, metformin is inappropriate for patients at risk of developing lactic acidosis from another cause, as this can lead to diagnostic ambiguity. Sepsis, which accounts for 6-10% of US inpatient admissions, is a common cause of lactic acidosis, and risk of developing sepsis would be a strong contraindication to inpatient metformin use.[12],[13] Based on epidemiologic analysis, approximately 2% of patients admitted to US hospitals develop nosocomial sepsis during their hospital course.[14] Major risk factors for hospital-acquired sepsis include presence of other infections, malnutrition, parenteral nutrition, venous or arterial lines, hemodialysis, and mechanical ventilation.14 Clinical judgment should be exercised when considering inpatient metformin treatment, and patients with risk factors for nosocomial sepsis may not be appropriate candidates.

Ultimately, Mr. D was so distressed by his insulin injections and fingersticks that he became irritable and nonadherent. He demanded that the team resume his metformin—which we did. I wonder how many other metformin-stable inpatients we confused and inconvenienced with our rigid sliding-scale insulin protocols.

Jamie Oliver is a medical student at NYU School of Medicine