The Overuse of Proton Pump Inhibitors: Implications for Prescribing Physicians 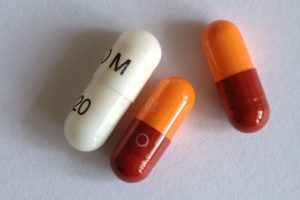 Proton pump inhibitors (PPIs), frequently prescribed for dyspepsia and other acid-related disorders, are one of the most commonly used medications in the US. As of 2012, an estimated 7.8% of the country’s adult population was taking prescription PPIs and use of this medication class was documented in 9.2% of ambulatory clinic visits [1,2]. Given their demonstrated effectiveness for relieving acid-induced symptoms, patients are often started empirically for any reflux-like complaint or other complaints referable to the upper gastrointestinal (GI) tract. However, despite recommendations to reevaluate response after 8 weeks, providers often fail to instruct patients when or how to discontinue the medication [3]. In many cases, prescribing inertia takes over and the patient’s PPI is continued indefinitely even in cases with unclear indications for their use. In fact, 46-63% of patients prescribed PPIs in the ambulatory care setting have no GI complaint or documented indication for anti-secretory therapy [2,4,5].

In addition to contributing to overspending on healthcare, studies have suggested that the overuse of PPIs may be responsible for a wide range of adverse effects that further increase expenditures. By changing the concentration of acid in the stomach, PPIs can alter the absorption of many medications and essential vitamins [6,7]. In population studies, long-term PPI use has been associated with elevated risk of interstitial nephritis, chronic kidney disease, dementia, bone fractures, and Clostridium difficile infections [8-11]. However, this remains controversial as many of the studies linking PPIs to these underappreciated side effects have received criticism for their observational design, residual confounding variables, and weak associations [12]. This emphasizes the need for more rigorous evaluation of the effects of long-term PPI use. Based on the current literature, the potential risks of PPI use are unlikely to outweigh the benefits provided to patients with appropriate indications for anti-secretory therapy [12-15]. However, it highlights the importance of maintaining proper PPI prescribing practices by using the lowest effective dose for patients with an appropriate indication, as even a low risk of adverse effects outweighs the negligible benefits for the large percentage of PPI users who are inappropriately continued on the medication.

There are several opportunities throughout the course of a patient’s care to intervene on inappropriate PPI use. A recent single institution study on non-critically ill inpatients found that on hospital admission, the number of patients taking PPIs nearly tripled (from 22% prior to admission, to 64%), despite appropriate indication documented for only 11% of the patients on acid-suppressive medication. Further, three-quarters of the patients taking PPIs while admitted were discharged on these medications, resulting in more than double the patients taking PPIs prior to admission (46% of patients) [16]. Not only does this suggest that PPIs are being overprescribed for inpatients, but it also highlights the importance of thorough medication reconciliation by physicians in outpatient clinics, particularly after a patient is discharged from a hospitalization.

Medication reviews are a necessary step to decrease inappropriate PPI use, though they may be insufficient given the results of a recent study which reported that 42% of patients with negative pH testing for GERD continued to take PPIs [17]. Many patients reported that they did not recall being told by their provider to discontinue the medication, and others reported feeling nervous that they may experience worsening symptoms if they were to stop the medication. While it is critical for physicians to counsel patients regarding their medications, it is also important to be aware of the possible difficulties associated with discontinuing a PPI. A trial of long-term PPI users found that one year after discontinuation of anti-secretory therapy, only 27% of patients were successful in remaining off PPIs while the rest had restarted the medication [18].

Rebound acid hypersecretion (RAHS) is a potential consequence of PPI use that is thought to be due to PPI-induced hypochlorhydria which leads to elevated gastrin secretion, parietal cell hypertrophy, and enterochromaffin-like cell hyperplasia. When PPIs are discontinued, this may lead to increased acid secretion, which can be greater than pretreatment levels, and result in dyspepsia and heartburn [19-23]. A trial with asymptomatic, healthy volunteers given pantoprazole 40 mg once daily for 4 weeks found that 44% developed dyspepsia after stopping the PPI, suggesting that, even in the absence of preexisting disease, discontinuation of PPIs can induce upper GI symptoms [24]. A similar study showed that asymptomatic volunteers on esomeprazole 40 mg daily for 8 weeks (followed by 4 weeks of placebo) resulted in 21% of participants reporting dyspepsia, heartburn, or acid regurgitation 4 weeks after stopping the PPI, compared to 2% of the group receiving 12 weeks of placebo only [25]. This effect is thought to result in patients quickly restarting the recently discontinued PPIs and may account for much of the difficulty involved in preventing PPI overuse. These symptoms usually peak within the first week without the PPI but can last up to eight weeks even in patients treated with a short course of PPI [21].

There is little existing data available to guide physicians in attempts to discontinue PPIs. A small, but appropriately powered, randomized controlled trial (RCT) of long-term PPI users found no significant difference in successful discontinuation with tapering versus immediate discontinuation [18]. However, a systematic review consisting of 6 studies (including 3 RCTs) suggested that patients instructed to slowly decrease their dose over time were more successful in discontinuing PPIs than patients who abruptly discontinued [26]. In a prospective non-randomized uncontrolled study, patients with GERD symptoms that had responded well to PPIs were put on a step-down management plan that halved the originally prescribed dose for two weeks before discontinuing completely. Using this strategy, 58% of patients were able to discontinue PPIs. Of the group who remained off PPIs, 59% required continued therapy with an H2 receptor antagonist (H2RA), while 27% remained asymptomatic without any acid suppressive medication [27]. Although this study did not directly compare multiple strategies of discontinuation, the high rate of success with a step-down approach combined with as-needed non-PPI acid-suppressive medication relative to the results of prior studies suggests that this strategy is worth investigating further. Overall, the limited available evidence suggests that tapering seems to be a more effective strategy than immediate discontinuation, especially when coupled with an H2RA or other over-the-counter antacid (e.g., calcium carbonate) as needed to control RAHS symptoms [28]. However, like much of the literature regarding PPIs, there is a lack of strong supporting evidence and further studies are needed to determine the optimal discontinuation strategy to minimize the risk of adverse rebound effects.

Despite their proven efficacy for many indications, PPIs can also be associated with significant risk. For patients presenting with reflux-like and dyspeptic symptoms, short-term PPIs are recommended but are inappropriately continued long-term, leading to significant overuse of this medication class. PPIs therefore represent an important target for physicians to reduce unnecessary medication use and lower the risks associated with polypharmacy. Unfortunately, patients frequently have difficulty discontinuing acid suppressive medications due to RAHS. Current strategies to successfully discontinue PPIs include a taper +/- treatment of recurrent symptoms with alternative therapies such as H2RAs, but there is low level evidence available to guide PPI discontinuation, and more robust prospective clinical trials are needed to identify successful protocols.

Matthew Kingery is a medical student at NYU School of Medicine

One comment on “The Overuse of Proton Pump Inhibitors: Implications for Prescribing Physicians”