The Mini-Cog: Efficiency and Effectiveness? 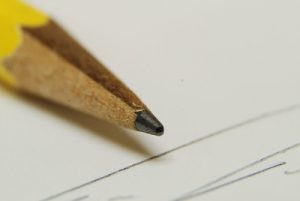 “Banana, sunrise, chair.” These are three words that have left my mouth countless times during my month in the Bellevue Geriatrics Clinic, as the first step of the Mini-Cog, a test developed by Dr. Soo Borson in 2000 to detect cognitive impairment in 3 minutes.1

It consists of three parts. First is three-word registration: the healthcare provider recites three words for the patient to repeat and try to remember for later. There are six sets of three words that have been used in clinical studies: banana/sunrise/chair, leader/season/table, village/kitchen/baby, river/nation/finger, captain/garden/picture, and daughter/heaven/mountain.2 Next is clock drawing: the patient is asked to fill the numbers of a clock into a blank circle. After doing so, they are instructed to set the hands to 10 past 11. The test ends with three-word recall: the patient is asked to recall the three words they were asked to remember earlier.

Scoring is from 0-5 points, with a score of 0-2 being consistent with dementia. Raising the cutpoint to <4 improves sensitivity but hurts specificity. The Mini-Cog is most commonly used in primary care, but can also be used in the community and other clinical settings to assess cognitive impairment in heart failure, surgery, and as a side effect of medications. It has been supported by the National Institute on Aging and the Centers for Medicare and Medicaid Services.3

The Mini-Mental State Exam (MMSE), developed in 1975, has been the most widely used screening test to measure cognitive function, and it set the standard for other methods. It consists of 11 questions to evaluate orientation to time and place, word registration and recall, attention and calculation, language, and visual construction.4 It was developed with the goal of brevity, taking 5-10 minutes to administer.

The Montreal Cognitive Assessment (MoCA), created in 1996, is another commonly used test to screen for cognitive impairment. The 10-minute test encompasses short-term memory recall, visuospatial abilities, executive function, attention, concentration, working memory, language, and orientation to time and place. It has been shown to be more sensitive than the MMSE at detecting mild cognitive impairment and early Alzheimer disease, albeit with a slightly lower specificity.5

Since the Mini-Cog is more focused on detecting dementia than mild cognitive impairment, it has mostly been studied against the MMSE as a benchmark. When compared to the MMSE, the Mini-Cog offers many benefits. First of all, it has fewer steps and takes a shorter amount of time. There are overlaps between the two tests (i.e., word registration and recall), but the Mini-Cog appears to pick out the most salient parts to emphasize efficiency without losing effectiveness. In fact, the first study of the Mini-Cog found that it is more sensitive at identifying patients with dementia than the MMSE.1

Critiques of the Mini-Cog include the argument that the test was developed and initially shown to be superior or comparable to the MMSE in a population that overrepresented dementia cases. However, a repeated study in a sample with a lower prevalence of dementia still found that the Mini-Cog and MMSE are similar in sensitivity and specificity for dementia.6

Many other studies in populations outside the US, including Austria and the United Kingdom, have shown the effectiveness and practicality of the Mini-Cog.7,8,9 A study in the UK actually suggested that the Mini-Cog be routinely used over the MMSE in primary care.9  Conversely, a study in Spain found the Mini-Cog to be inferior to the MMSE for detecting cognitive impairment in primary care.10

Unlike the MMSE, the Mini-Cog has minimal language content, to reduce cultural and educational bias.1 The official website provides the test form in Spanish, Portuguese, Chinese, Malay, and Arabic. The Mini-Cog has even been adapted to different cultures in countries like Thailand, where a study showed that a translated form of the test had good interrater reliability and positive concurrent validity.11 I personally have worked with immigrant patients who are unable to read and write, and have been able to complete the Mini-Cog with them. The only difficulty that may arise with future geriatric populations is the shift from analog to digital clocks, which may require modifications in the clock drawing test.

So, what were the three words I asked you to remember?

Emily Zhang is a medical student at NYU School of Medicine