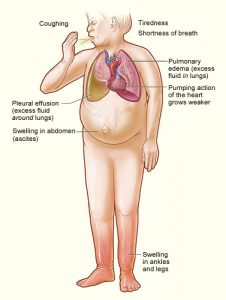 Despite the growing prevalence of HFpEF, our understanding of its pathophysiology and clinical management lags far behind that of HFrEF. HFrEF is a disease of systolic dysfunction, and multiple randomized clinical trials have shown survival benefit with the use of beta blockers, angiotensin-converting enzyme (ACE) inhibitors, angiotensin-receptor blockers (ARBs), and mineralocorticoid receptor antagonists such as spironolactone and eplerenone.4

In HFpEF, although the mechanisms remain unclear, cardiac remodeling (via myocardial hypertrophy and fibrosis), impaired left ventricular relaxation, and increased vascular stiffness all contribute to diastolic dysfunction.5,6 While the four classes of agents that have shown survival benefit in HFrEF are recommended by AHA/ACCF guidelines to treat comorbid hypertension in patients with HFpEF,2 no studies to date have shown a significant survival benefit with any agent in patients with HFpEF.7

Sacubitril/valsartan, an angiotensin receptor-neprilysin inhibitor (ARNI) combination drug, has become a promising new agent in the treatment of heart failure. Neprilysin is an endopeptidase that is responsible for the degradation of helpful vasoactive peptides such as brain natriuretic peptide (BNP), adrenomedullin, and bradykinin. Lower circulating levels of these vasoactive peptides result in neurohormonal overactivation, leading to cardiac remodeling, vasoconstriction, and inappropriate sodium retention, all of which are implicated in the diastolic dysfunction characteristic of HFpEF. By preventing the degradation of these peptides, sacubitril is thought to mitigate these destructive processes.  However, neprilysin inhibition alone results in increased levels of vasoconstrictive peptides such as angiotensin I and II, which lead to increased vascular resistance, further sodium retention, and myocardial fibrosis.8 Combining sacubitril with an ARB prevents these downstream effects of angiotensin signaling, while also preventing the excessive increases in bradykinin associated with severe angioedema seen in early trials of sacubitril and ACE inhibitor combined therapy.9

Sacubitril/valsartan has already shown a survival benefit in patients with HFrEF. The Prospective Comparison of ARNI with ACEI to Determine Impact on Global Mortality and Morbidity in Heart Failure (PARADIGM-HF) trial,10 a 2014 randomized trial comparing sacubitril/valsartan to enalapril (an ACE inhibitor), showed a significant benefit of ARNI therapy in the reduction of the primary outcome of cardiovascular mortality or heart failure hospitalizations, although it was associated with a significantly increased risk of symptomatic hypotension. Although no such survival benefit of ARNI therapy has been shown to date in HFpEF patients, there have been promising results that sacubitril/valsartan may also benefit patients with HFpEF.

In the 2012 phase 2 PARAMOUNT trial comparing sacubitril/valsartan to valsartan in patients with an LVEF > 45% and a documented history of heart failure, ARNI therapy was shown to have beneficial effects on surrogate endpoints: biomarkers indicative of heart failure progression as well as echocardiographic evidence of cardiac remodeling. At 12 weeks of follow-up, ARNI therapy was associated with a significantly increased reduction in N-terminal pro-brain natriuretic peptide (NT-proBNP) levels compared to valsartan therapy.11 Higher levels of NT-proBNP have been shown to be associated with poor outcomes in patients with HFpEF,12 and reductions in NT-proBNP levels have been associated with improved outcomes in patients with stable HFrEF.13 Additionally, at 36 weeks, left atrial volume and dimension were significantly reduced in the ARNI group.11 Increased left atrial volume is believed to reflect increased left ventricular filling pressures that can lead to diastolic dysfunction, and previous studies have shown that left atrial enlargement is significantly associated with cardiovascular morbidity and mortality in patients with HFpEF.14

With all of this promise from prior studies, the recently published Prospective Comparison of ARNI with ARB Global Outcomes in HF with Preserved Ejection Fraction (PARAGON-HF) Trial was the first to address the essential question of whether sacubitril/valsartan provides a survival benefit to patients with HFpEF. In this head-to-head trial comparing sacubitril/valsartan to valsartan alone in patients with NYHA Class II to IV heart failure and an ejection fraction of 45% or higher, investigators focused on a composite primary outcome of total hospitalizations for heart failure and death from cardiovascular causes. Although there was a strong trend to benefit favoring the sacubitril/valsartan group, the study narrowly missed statistical significance for the composite primary outcome (rate ratio, 0.87; 95% confidence interval, 0.75 to 1.01; p = 0.06). Analysis of the individual components of the composite outcome indicated that much of the trend to benefit arose from reduction in hospitalizations for heart failure, while death from cardiovascular causes in these two groups was nearly equal (hazard ratio, 0.95; 95% confidence interval, 0.79 to 1.16).15

While the results of the PARAGON-HF trial certainly came as a blow to the millions of HFpEF patients awaiting the first medication clinically proven to reduce mortality, the trial does provide insight into future research regarding the potential benefit of sacubitril/valsartan in HFpEF. The authors highlight the phenotypic heterogeneity of HFpEF patients, and despite not achieving a significanct reduction in the composite primary outcome in the total study population, sacubitril/valsartan did show a differential benefit in two pre-specified subgroups: women with HFpEF and those with lower ejection fractions (45-57%).15 Thus, future research should address targeted use of sacubitril/valsartan in these specific populations who may demonstrate true benefit from the drug.

The main challenge in studying heart failure with preserved ejection fraction (HFpEF) is that there are at least four associated phenotypes: aging, obesity, pulmonary hypertension, and coronary artery disease.16 Combining all phenotypes into one study runs the risk of missing a subtype of HFpEF for which there is benefit or harm. Future studies should attempt to study each phenotype of HFpEF separately in order to make sense of this vexing diagnosis.

Jad Malas is a 3rd year medical student at NYU Robert I. Grossman School of Medicine